were unveiled within a week of each other, and on the surface, the two machines have a lot in common. They’re both handheld gaming consoles that you can attach to TVs. Each one comes from a trusted developer with decades of experience in the industry. But even with all that common ground, there’s no getting around the fact that the two systems have different audiences in mind.

Deciding whether you want a Steam Deck or a Switch OLED, then, is more about assessing your own gaming habits than comparing the minutiae of each device. If you’re curious about which device might suit your preferences better, read on for our preliminary Valve Steam Deck vs. Nintendo Switch OLED observations. 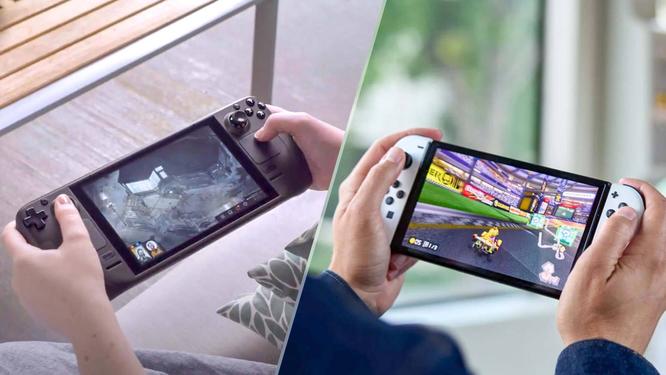 The Nintendo Switch OLED comes in two versions, but the differences are purely cosmetic. One comes with white Joy-Con controllers, while the other comes with neon red-and-blue Joy-Cons. The system costs $350, and launches on October 8. Remember, too, that the Switch OLED will not replace the current basic Switch ($300) or Switch Lite ($200).

You’ll also be able to pick up the Switch OLED a few months before the Steam Deck, suggesting that Nintendo might want people to give (and receive) the console as a holiday gift. If the Steam Deck won’t ship until December, getting it in time for the holidays may be difficult.

Both devices are rectangular consoles with 7-inch touchscreens at their centers. The Switch’s OLED screen caps out at 720p while the Steam Deck’s LCD screen supports a slightly higher 1280 x 800 resolution. Both have directional buttons and an analog stick on the left, as well as another analog stick and face buttons on the right.

The Switch OLED will use the same Joy-Cons as the current Switch model, which means you’ll have to deal with the separated directional buttons and the somewhat superfluous Capture button. There’s always the possibility of

, too, but we’ll have to wait and see whether Nintendo has ironed out this problem once and for all.

From size and weight perspectives, the Switch OLED has a definite advantage, measuring 9.5 x 4.0 x 0.6 inches and weighing 14.9 ounces. Compare and contrast to the Steam Deck, which measures 11.7 x 4.6 x 1.9 inches and weighs 23.6 ounces. While we won’t know for sure until we get our hands on both devices, it seems like the Switch OLED will be much more comfortable to hold for long periods of time.

One area where the Steam Deck has a definite advantage is in terms of hardware. The Switch wasn’t the most powerful system when it debuted in 2017, and the Switch OLED hasn’t changed much of the hardware. Nintendo’s latest variant features an Nvidia Tegra X1 processor, an Nvidia Maxwell-based GPU and 4 GB RAM, just like the base model. Instead of the base models 32GB eMMC flash memory, however, the OLED will feature 64GB. You can also store games on a microSD card, but your save data is tethered to your console, unless you pay for Nintendo Switch Online ($20 per year) and its cloud save features.

As mentioned above, the Steam Deck has variable storage options, depending on how much you’re willing to pay. But all models have the same CPU and GPU: an AMD Zen 2 3.5 GHz and an AMD 8 RDNA, respectively. The system features 16GB RAM and, conveniently, full Bluetooth 5.0 support. While the Switch OLED will employ limited Bluetooth capacities, you probably won’t be able to connect your own headphones or controllers, since you can’t do so on the current Switch.

While it’s hard to compare specialized CPUs and GPUs for consoles, there’s no denying that the Steam Deck sounds much more powerful. We don’t know exactly what kind of output we can expect when hooked up to a TV, but the Switch OLED targets 1080p resolutions at 30 frames per second. The Steam Deck should be able to surpass that.

It’s also worth noting that the battery life on both consoles will be highly variable, depending on what you’re playing. Steam Deck promises 7-8 hours, while the Switch OLED targets between 5-9 hours. This category will be hard to gauge until we can run some apples-to-apples tests, however.

The Steam Deck has the potential to run hundreds — if not thousands — more games than the Switch OLED. That’s because at its core, the Steam Deck is simply a small PC, and PCs have access to all of the

and the widest game library around. You’ll be able to install just about anything on Steam, of course, but Valve also promises that you’ll be able to “install and use PC software” normally. In theory, this means that if you can find a way to download your software, you can play it. (It’s especially interesting to think about how the Steam Deck might cooperate with Xbox Game Pass, but there are no hard details on that potential crossover just yet.)

Compare and contrast to the Nintendo Switch OLED, which has access to the

games and the full Switch library. While the Steam Deck’s potential game selection will be much, much bigger, the Switch is not without its charms. Nintendo still has a strong selection of exclusive titles, from The Legend of Zelda: Breath of the Wild, to Splatoon 2, to the upcoming (and very promising) Metroid Dread. You simply won’t be able to play these games on a PC, at least not without some convoluted and shady workarounds.

When it comes to docking, the Steam Deck and the Nintendo Switch OLED both have their pros and cons. Like the regular Nintendo Switch, the Switch OLED comes with a dock. This means you can hook it up to a TV right out of the box, with minimal effort. On the other hand, it also means that you can’t connect the Switch directly to a TV or monitor via USB-C, which would admittedly be more convenient in many cases.

The Steam Deck, on the other hand, can connect to any display just like a PC can, provided you have the right adapters. According to Valve, the Steam Deck’s USB-C port “can carry video, audio, input, etc.” and can function on anything from an OLED monitor to a CRT TV. The tradeoff is that the Steam Deck won’t come with a dock, although one will be available separately.

We’re not yet sure how much the dock will cost, although we do know that it will hold the Steam Deck upright, and come with ports for USB-C, USB-A, DisplayPort, HDMI and Ethernet. Just be aware that the HDMI output from the official dock will be HDMI 2.0 rather than HDMI 2.1, which may limit resolution and frame rate.

While we don’t know exactly how the Steam Deck and the Nintendo Switch OLED will stack up to each other in practice, we can say that they have very different demographics in mind. The Nintendo Switch OLED, like other Switch models, targets a console-centric audience, with a streamlined interface and a focus on Nintendo franchises.

The Steam Deck, on the other hand, seems like a much more powerful and open-ended device, letting you run more demanding games at a higher clip, and expecting you to bring at least some of your own hardware to the party.

And yet, while both devices look promising, neither one seems indispensable right now. The Nintendo Switch OLED, at its core, is simply a slightly larger Switch, with a slightly prettier screen, and considerably more storage space. It’s arguably worth an extra $50 over the core Switch model, but it’s probably not worth another $350 if you already own one of Nintendo’s handheld hybrids.

Likewise, the Steam Deck looks promising, but Valve has had a tough time with hardware in the past. The company seemed to lose interest in the inventive Steam Controller and the convenient Steam Link long before they reached their full potential; the company’s ambitious line of Steam Machines never materialized at all. And even if the Steam Deck performs beautifully, there’s the question of how long it will last, as PC technology tends to advance much faster than console generations.

Marshall Honorof is an editor for Tom's Guide, covering gaming hardware, security and streaming video. After hours, you can find him practicing taekwondo or doing deep dives on classic sci-fi.