Clara, thank you so much. And I got to tell you this is a Brooklyn moment. I’m just going to feel my Brooklyn feelings right now, everyone. Because we are celebrating one of the greatest Brooklynites of all time. And we're celebrating in a Brooklyn way, everybody together, talking about the ways we're going to help people. We're going to make sure that everyone who needs health care gets it. Everyone. That's what Health + Hospitals is about. That's what this hospital is about. That's what this new exciting reality we're creating is about. Now, Clara, thank you. You're doing something very special for all of us being here. Because we're feeling a connection right now to your grandma. And she did so much good in this world. And I like to say, when you look at her history, as a proud Brooklynite, she went to our public schools. Her activism started very young, even as a school child. There's something about this place we love that gives people a certain spirit, a spunk, an ability to go out there, do something, not be afraid. Brooklynites are fearless, sorry, Carlina. We're going to have to have a little Brooklyn love song here. Brooklynites are fearless by nature. And your grandma is such a great example to us all, as someone who just never backed down. And I want to thank you, because you are carrying on the legacy your way. Fighting for health care rights, fighting to make sure that people get equal rights to health care. Your work is not only carrying on her legacy. Your work is priceless in this moment in history where we know there's too many people who don't get health care. Still not enough justice being done. And you've picked up that torch and carried on. Let's thank Clara for all she is doing everybody.

So, this hospital, named after one of the greatest New Yorkers, is going to be a symbol to everyone in Brooklyn, particularly in Southern Brooklyn, this is the place to come for quality care. We are honored that the family agreed to join with us and have Justice Ruth Bader Ginsburg's name on this hospital. We're honored because we get to celebrate her greatness. But it's also a message to all Brooklynites and all New Yorkers, that here's a place where you will be treated right. Here's a place where you'll be cared for. Here's a place where you matter. Because in my own personal way of summarizing the greatness of Ruth Bader Ginsburg, she thought everyone mattered. She didn't – she would not accept, honestly, she wouldn't accept a world in which women were not valued as much as men, or people of one race valued differently than another, or people with greater income valued more than people with less. Her egalitarianism, which is a true Brooklyn value, is something we honor. And she put herself on the line for it every day. Well, that name on this hospital is going to say something to all Brooklynites. Here's a place where you'll get fairness and justice, where you'll get quality and love and respect. And that is very, very powerful.

I want to tell you, folks who have gathered here today, I want to thank everyone because this is one of those moments we'll remember. And thank you everyone for being a part of it. The community altogether, celebrating this new moment. I want to do some special thank you’s to my colleagues in government, because this announcement really synergizes beautifully with the work we're all doing to make our city healthy, to fight COVID back, to bring our city back strong. The rebirth of New York City is happening before your eyes. And here in the middle of this moment, we announced something great, a new hospital with the most powerful of names, showing that you cannot stop the city. You just can't hold New Yorkers down. You cannot stop us. That's the beauty of this place. But I also want to say, we've got some real help when we needed it. And it's such an important reality for New York City and for Brooklyn, that one of our own is one of the preeminent leaders of the United States House of Representatives, because we talked about many times during the long fight to get stimulus funding, making sure it would come here directly to New York City, not someplace else, but here, to help us recover. And Congress Member Hakeem Jeffries, you did the deluxe version of stimulus. Thank you.

And we needed help from Albany. We needed help to make sure we could bring back our schools in particular. Because we all know there's nothing more precious than our children. And if our schools come back, our city comes back. And we got historic support, things that a lot of us have been fighting for, for the last 20 years happened this year in Albany. One of the leading voices, Brooklyn’s own Assembly Member Steve Cymbrowitz, thank you.

And my friends in the City Council, who every step of the way as we fought back, as we fought COVID, and we fought to recover, were there making sure the resources were there, supporting efforts to get people vaccinated, but to do it equally. To make sure that vaccination was just as available in Coney Island as in the Upper East Side, in the Lower East Side, as it is on Wall Street. And that's what we did, vaccination everywhere. And, right now, in New York City, and I'm proud of this. We are leading the nation, literally. We said it was time to have a vaccination mandate. So, everyone in public service would be safe and help keep us safe. We said we would do a hundred-dollar incentive to make sure every New Yorker had an added reason to get vaccinated. The minute we did those things, it started to be emulated. The President of the United States said, let's do those incentives. All over the country, public sector, private sector followed those examples. And now, what we've said with the Key to NYC Pass, we want people to enjoy this beautiful city – the indoor dining, the entertainment, everything – but we need you to be vaccinated. I want to say again, deep appreciation to our President Joe Biden. I put that idea out there, he endorsed it within hours, and now you see it happening all over the country. The vaccine mandates – respectful, but necessary, to fight COVID once and for all. So, we are going to keep changing things and we've had amazing help from Council Members Mark Treyger and Carlina Rivera. Thank you to both.

And I will conclude with this. So, someday, someone's going to do a list of everybody from Southern Brooklyn who changed the world, and it's going to be a very, very long list. In fact, we, even as Brooklynites, even as New Yorkers, don't even know some of the people who are particularly famous who have had a big impact. We don't even realize where they are from. I'll give you an example. We're doing these amazing concerts in a couple of weeks now. The Homecoming Concerts, the one in Central Park, literally is going to rival Woodstock in terms of lineup. It's unbelievable. Who put it together? Clive Davis, legendary music industry figure, one of the greats of modern music in America. Guess where he's from, everybody? Southern Brooklyn, a graduate of the New York City public schools. 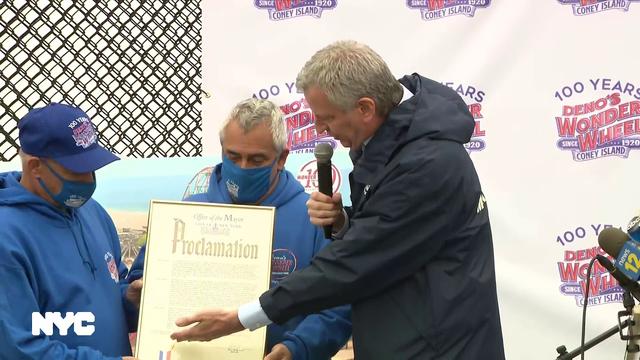 So, I could go on and on and on. One of the greatest of all time, unquestionably, Ruth Bader Ginsburg. And we feel [inaudible]. One last thing I want to say about her, when you say the name, you feel something. You feel emotion about someone who did so much good and fought so well for so long. But I’ve got another favorite Southern Brooklynite. And he left us for a little while, he went to California, I don't know why. But he saw the light and came home. What he did not know was he was coming home just a year or two before a global pandemic. But can I tell you, thank God, Mitch Katz came back to New York City when we needed him.

So, Mitch Katz is in that category with Bernie Sanders, and Chuck Schumer, and so many others. A few words into his first sentence, you know where he's from. And I say that with respect and honor. But this guy, I have turned to him every day since COVID began. He has never failed me. He has shown love and appreciation for the great people who work here and at all the other H + H facilities. He has been their field marshal in battle, and they can feel his presence. He sees patients himself. He is at the front line. He has been in dispensable. We would not have gotten through COVID as well as we have, we would not be in this fight today, except for the person I introduce to you, Dr. Mitch Katz.

And my other thank you has been that, I've been on the phones at 1:00 AM, 2:00 AM in the crisis last March, and what the Mayor always was saying is get whatever you need. Never did I hear – well, how much is it going to cost? How much is that extra staffing? At the height of the pandemic and last March, we had 6,000 additional people working for Health + Hospitals, because so many people were out sick and we had tripled the size of our ICU, and never once did anyone say from the Mayor's Office or himself – well, Mitch, how much is this going to cost us? How are we going to pay for this? What about all that new, you know, all of the PPE – never once. It was always about – Mitch, you’ve got to do whatever is necessary to save lives. We will figure out later how to pay for that. So, I thank you, sir. I thank Carlina who always would send me little texts – Mitch, how are you doing? You know, is there anything you need on behalf of the hospital? Mark, I appreciated – when I needed your help, you were there. So, thanks to my City family so much.

But we wouldn’t have said we were Coney Island, we would've said we were Sheepshead Bay. But my great-great-grandmother got care here. My grandmother and grandfather, my parents, my siblings, we all – multiple generations got care here. And I think the South Brooklyn name captures that we love Coney Island, but we're more than Coney Island. As Svetlana, another South Brooklyn person has said, right, we are a big catchment area. So, I love the new name. And, of course, being able to honor the great justice is just amazing. And I think it's everything that Health + Hospitals wants to be and is – a place for everybody, that seeks to care for everybody, regardless of their backgrounds. So, thank you all. Thank you to my doctors and my nurses and everyone here. Thank you.