Mario Golf has been a well loved franchise since it’s first release on Nintendo 64. Over the years the game has been reimagined for a multitude of consoles, eventually landing on the release for Nintendo Switch. Mario Golf: Super Rush is another successful rendition of the game, developed by Camelot Software Planning. It’s accessible, fun for all the family and features new and exciting elements never before seen in any of the Mario Golf games.

A real hole in one

As a sports game, like Mario and Sonic at the Olympic Games or the absolute classic Wii Sports, it doesn’t really feature any storyline. However, the single player campaign is still engaging. You take on the character of your own mii, who is praised as a pro-golfer. This feature is basically a tutorial to the game, as you progress from beginner to pro golfing standard. It’s a fun way to engage with controls and get used to the feel of the game before just jumping in and playing with friends. There are several hours of gameplay within the campaign, so it’s just enough to sink your teeth into.

The campaign doesn’t just leave you to practise golf though. In a strange turn of events you are plunged into a world being pursued by the snow king. With plans to freeze over the world of Mario Golf, you are tasked as the hero. It becomes your responsibility to save the world from this devious plan, and what better to do it with than a series of golfing challenges. This shift in storyline appears to come out of nowhere, and it certainly goes from 0 to 100 real quick. As a sports game neatly packaged with the Nintendo title, you don’t expect this tense rescue mission. But it is most certainly appreciated when it comes to fruition.

This gives some meat to the game, and it’s a thoroughly enjoyable experience. I went in with the expectation that this would be a perfect party game for entertaining people for a few hours. I didn’t realise it would become a tense, evil defeating quest which not only gives you a deep understanding of how to play the game, but also leaves you feeling accomplished once the Snow King is finally gone. It’s a super engaging way to learn more about Mario Golf and rehearse your moves for friendly matches, and it definitely leaves you not wanting to put it down after a few holes. Completing this campaign unlocks certain buffs and game modes, so you better get putting.

Easy and enjoyable for everyone

As for the gameplay, controls are easy to understand and also easy to apply in game. At first, you feel a little uncertain as to what all the different bars and flags and widgets round the screen mean. But upon beginning the game everything is gently explained until it thinks you’re comfortable. I was very skeptical at first, due to not knowing what was going on and diving directly into single player mode. But after a few rounds I was absolutely raring to go. 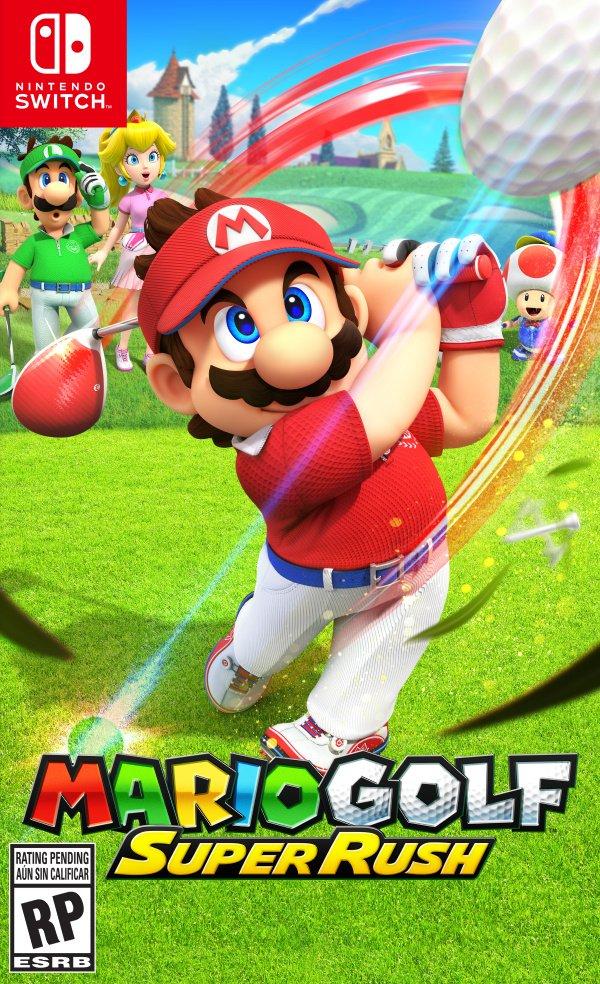 ple modes to choose from

Super Rush comes equipped with four game modes. At first, this didn’t really seem like enough. But upon further gameplay and more hours spent in it, these modes are thrilling and fun time and time again. First up is Speed Golf, which aside from the core game held the most appeal from fans. It was definitely the most advertised element. It’s basically just golf but with more action after swings. Unlike other multiplayer golf games, where you swing and then it’s the next player’s turn, Speed Golf allows you to run around and chase your hit. The more players, the more chaos is caused. There are speed boosts and ways to sabotage others, and the end goal is essentially pot the ball first. It’s a whirlwind of fun, and doesn’t get old by any stretch of the imagination.

Secondly, Battle Golf is quite the interesting competition. It’s similar to Speed Golf but with less chaotic dashing about. Essentially you once again have to score all your holes first. Compared to the previous havoc caused this is a slight change in pace. It’s more of the relaxing elements of Mario Golf yet still has the competition people crave from a Mario game. I definitely preferred Speed Golf, but Battle was still fun. If you’re looking for something to play without the JoyCon snapping gamer rage of your peers, Battle Golf might be the mode for you.

Then there’s always the old classic mode. An easy, laid back approach to Mario Golf: Super Rush. It’s simple and fun, and with a whole carall of character to choose from you simply cannot go wrong when sitting back and just enjoying the game with your friends. Unlike previous Mario Golf games, there is a wide selection of beloved Mario characters to play. Rather than just having the original cast, Mario, Luigi, Peach, Toad, players can choose from 16 characters (not including your mii). This list surely includes everyone’s favourite member of the team. Boo, King Bob-omb, there’s someone for everyone in Mario Golf: Super Rush.

Super Rush is a very visually pleasing game. Featuring the highly saturated bright colour palettes of the Mario franchise, and all the characters you’ve known to love over the generations, it’s just great. Everything looks the part, the grass is bright and elements are lit up when needed to be. It left me reminiscent of the endless hours I poured into Mario Kart as a child. There is just something so nostalgic about the Mario series, and each game definitely tries to echo the previous.

There are different courses depending on the game mode you select. There’s bright grass, sandy plains or ‘Bowser stages’ which dramatically contrast the comfortable environments we are used to golfing in. It’s a colourful explosion on the Nintendo Switch. The game also takes obstacles into account, so if you’re planning to bypass the majority of the course by slamming your golf ball through a nearby tree, I wouldn’t recommend it. If you’re like me, you’ll end up starting at the beginning of the course after trying to pursue one of these trickshots.

As a whole Mario Golf: Super Rush was a storm of chaotic excitement, as most Mario games tend to be. It was fun, bright and still took a level of skill to compete in. I definitely plan on having many evenings in the future filled with laughter and a lot of Mario Golf.