A man in the US who was caught filming a woman in a gym without her knowledge while she exercised has been banned from the gym after a clip of him in the act went viral.

US TikTok user @anneli.k8 shared a video of an unidentified man sitting on a piece of fitness equipment in a Crunch Fitness gym. His phone was held in front of him, visibly filming a woman on the other side of the gym as she performed lunges.

Anneli shared the clip on social media on Friday along with the caption: "LADIES WE NEED TO LOOK OUT FOR EACH OTHER. I told the girl and notified staff."

quickly blew up and in a series of follow-up videos, Anneli explained the Oklahoma gym had swiftly "banned" the man over the inappropriate behaviour.

Woman shares 'creepy' footage of man in gym appearing to photograph her as she works out - NZ H...

Poor sleep is really bad for your health, but we found exercise can offset some of these harms ...

Many praised Anneli for springing into action, but others questioned whether she may have got it wrong.

A TikTok user shared a video of a man filming a woman working out without her consent. Photo / TikTok@anneli.k8

"Let me break this down for you guys because apparently you need it which just blows my mind," she said.

"So I'm doing my workout, just doing my set, whatever. This man is in front of me, I can only see his back side, his phone is in my eyeline and he is repeatedly taking videos and pictures of this girl.

"Yes it was a girl, I was there, it's not a guy that he is recording for form." 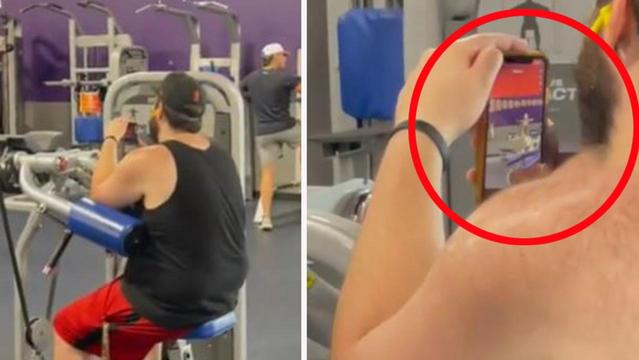 Anneli went on to shut down suggestions he was filming her in order to recreate the move himself, saying you can find everything you need to learn about exercises and forms on YouTube.

"So I catch him in the act, I have proof and I stop my set to go show this girl, telling her this man in this video is taking videos of you. You can see yourself in the camera, I just wanted to let you know."

She described the woman being "freaked out" at learning this, explaining she had no idea who the man was and decided to "grab all her stuff" and leave.

"Obviously this isn't a man that she knows, a boyfriend, a friend," Anneli said. She also claimed that when she went back to her own workout, she saw the man recording a second girl.

"So I take my disgusted self up to the staff members and one of them ended up being the manager," she said, explaining she sent the video to him and completed an incident form.

Anneli later updated followers to say the man had been 'banned'. Photo / TikTok@anneli.k8

A couple of days later, Anneli revealed in another video she had received a phone call from the gym explaining the man had been "banned".

Her original video, which has been viewed more than 1.7 million times, sparked outrage in the comments section – many stating his behaviour was "wrong" and "creepy".

Some argued Anneli shouldn't have been recording him either, however many others leapt to her defence.

"Aren't y'all always asking for proof of men creeping at the gym? Now you're mad she got proof? It almost seems like you don't want them to be caught," one argued.

"The people defending him are just like him. They're not dense, they're defending their own," another wrote.

While one said: "The men defending him in the comments are part of the problem."

Mostly though, people thanked Anneli for doing the right thing.

"Yay, hopefully this can serve as a warning to other creeps that think this behaviour is OK," another wrote.

Tags： phone front and back,