If you're looking for a desktop Mac, rather than the mobile charms of a Mac laptop (in which case, read our

) there are two obvious choices in the Apple range: the iMac and Mac mini. In this article we look at how they compare for features, specs and value for money, and help you decide which is the right choice for you.

How the iMac and Mac mini compare

There are some key differences between these desktop Macs, but they also have a lot in common.

The most obvious difference is that the iMac includes a screen. If you buy a Mac mini you will need to purchase a screen (and keyboard and mouse) separately.

However, the 24in iMac and Mac mini share the same components now that they both use the M1 Chip from Apple.

The 27in iMac, on the other hand, uses an Intel processor, as does one of the Mac mini options.

As long as you don't mind the lack of display the Mac mini offers all the power of the iMac for a lot less money, as you will see if you read on.

There are various iMac models: three 24in models, one 21.5in model (which we recommend you ignore) and three 27in models.

The 24in iMac was introduced in April 2021. Pre-orders began on 30 April and delivery is expected in mid May 2021. There are three standard models:

The 27in iMac were last updated in August 2020. There are three standard models:

There is also an entry-level iMac that dates back to 2017. This iMac doesn't feature a Retina display and lacks a lot of the features offered by the alternatives. We strongly advise against buying it.

As for the Mac mini there are three models. Two of these were introduced in November 2020 and include Apple's M1 chip. The other Mac mini is an older model that dates back to 2018, although Apple did double its storage earlier in 2020.

What is the best value for money?

As we suggested above, in terms of what you get for your money it's pretty clear that the Mac mini is a great deal in comparison to the iMac.

Of course the difference between the iMac and Mac mini is really a lot more than the screen. There's other technical expertise going on behind that screen. But when you compare on the basis of specs then little to justify the additional expense.

We will look in a bit more detail at the specs and features on offer in the iMac and the Mac mini below, but before we do, there's something else to consider: design.

For just over a decade the iMac has had an instantly recognisable slim, all-in-one design with a a brushed aluminium 'chin' bearing the Apple logo under the 21.5in or 27in display. That was the case until 20 April 2021 when Apple introduced the new 24in iMac with an new and colourful design.

The 27in iMac is yet to be updated, so for now we have the same design as before. You can see how the new and old iMac designs compare below:

The 24in iMac comes in a variety of colours: blue (above), green, pink, silver, yellow, orange and purple. The 27in iMac is only available in silver (although there was a Space Grey iMac Pro for a couple of years, until

For our thoughts about the design of the new 24in iMac read:

Why I'm disappointed with Apple's 24in iMac design.

Key to the iMac's appeal is the fact that the screen is part of the package, unlike most desktop computers that require you to purchase a separate display. Apple's iMac display (at either 4.5K or 5K) is superior to a lot of displays that would cost a lot more than the iMac does to buy, so it's an easy decision, unless of course you already own a display that is sufficient for your needs.

If you don't mind purchasing a separate display (and mouse and keyboard) then Apple's Mac mini could well be ideal for you. It's cheaper than the iMac but offers equivalent specs.

Keeping with the 'if it ain't broke' motif, the Mac mini also hasn't changed a lot in the past ten years, although when it was updated in 2018 Apple switched from silver to a Space Grey finish, and then returned to silver in 2020.

In terms of construction nothing has changed though, with the classic 19.7cm x 19.7cm x 3.6cm aluminium chassis making it a perfect fit for smaller desks or even rack mounting. As with the iMac, you'll find all of the ports situated at the rear.

Many wondered why Apple didn't completely redesign the Mac mini when it was updated in 2018 and again in 2020 - by all accounts there is plenty of wasted space on the inside, so the unit could be slimmed down considerably making it even smaller. Turns out that the Mac mini is very popular with server farms and the like where they have existing setups - and keeping the design the same will make it easy to pop new units in. If the existing design matters to you then this could be an important factor. And it's not like it really needed to be smaller.

One benefit of buying an iMac is that it comes with a display, either a 24in 4.5K Retina or 27in 5K Retina. Note that the display on the 2.3GHz 21.5in iMac is not Retina.

In the case of the 27in iMacs the 5K display is one of the best 5K displays you can get, but it could soon be even better. If Apple updates the design of the 27in iMac we could see a 30in display for the next generation. If that sounds interesting to you then it may be worth waiting.

There's no such deliberation to be made about the Mac mini display - you have to bring your own. But when you do so, the M1 Mac mini can support two displays - including a 6K resolution screen. The Intel model that is still on sale can support three 4K screens simultaneously, or one 5K display and one 4K display.

We have some very similar options here, in fact two of the 24in iMac options share exactly the same M1 and storage options as a Mac mini:

As you can see the Mac mini is considerably cheaper.

Those are the options that include Apple's M1 chip, but there are also Macs that run on Intel processors.

Here we have an Intel-powered 21.5in iMac and a Mac mini that look like comparable options:

These two Macs share the same price, but the Mac mini clearly offers the best value for money: It offers a six-core 3.0GHz processor that is one generation newer, compared to an older dual-core 2.3GHz processor. It also offers twice as much storage. The iMac only offers the display - and remember that isn't even a Retina display.

As for the 27in iMac, the closest alternative is actually the 16in MacBook Pro (which costs a lot more). For now these are the specs you can expect, although we do think that Apple will be updating the larger iMac before the end of 2021.

We will go in to more detail below as we run through the different processor, graphics, RAM and storage options.

Back in June 2020 Apple announced that it would be transitioning from Intel processors to its own silicon - which we now know as the M1.

Apple has since introduced a new Mac mini in November 2020 and the 24in iMac in April 2021, both featuring the M1 chip.

There are still various Intel processors on offer, but our advice right now is to ignore them unless you really aren't ready to make the switch to Apple Silicon.

With Apple's move to its own processors in mind we would recommend waiting until Apple updates the processors in the 27in iMac rather than buying one of the Intel-powered models right now. Unless of course you can't wait, or you need to stick with Intel for some reason.

However, if you do need a new iMac now, and the 24in model isn't sufficient, then the 27in offers excellent 6- and 8-core 10th generation Intel processors. These models are impressive, it's only that we anticipate something much better just around the corner.

Apple's likely to take a little longer to develop its own processors for the pro-oriented iMacs, but we do expect a launch later this year.

Apple's M1 Mac mini and 24in iMac and the 27in iMac models all ship with 8GB RAM as standard. However this RAM is not the same.

The RAM in the M1 Macs is part of the M1 chip. It's what Apple is referring to as unified memory architecture, or UMA, and is accessible to both the CPU and the GPU. Apple indicates that there should be performance benefits due to this, because the memory can be allocated according to where it is needed most. The limitation of the M1 Mac is that it can only be updated to take 16GB RAM. 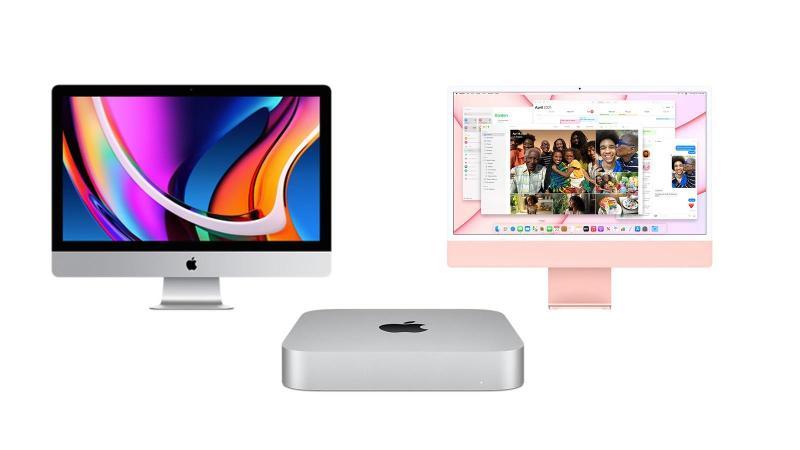 The graphics provision was always an important distinction between the iMac and Mac mini.

The 21.5in iMacs (with the exception of the entry-level model) and the 27in iMac always offered discrete graphics with their own allocated memory of 2-, 4- or 8GB. People who work with graphics intensive apps will tend to choose a dedicated graphics card over integrated graphics.

With the arrival of the 24in iMac this changed. The graphics for the 24in iMac are now part of the M1 chip. However, this doesn't seem to be holding back the graphics capabilities of M1 Macs. We already know that the M1 graphics are impressive and that they beat the Intel integrated solutions.

Normally integrated graphics would be less powerful than dedicated graphics because they share RAM with the processor, but in this case, as we explained in the RAM section above, having the RAM, graphics and processor on the same chip is much more efficient.

However, the M1 MacBook Pro was beaten when pitched against a Mac with an external graphics card - so an

- which suggests that the iMacs with discrete graphics might perform better than the M1 iMacs, we'll be looking into this.

With the updated M1 Mac mini at the end of 2020 and the introduction of the M1-powered 24in iMac update in April 2021 there isn't a better time to buy these two Macs.However, as we made clear earlier, the Mac mini offers much better value for money, so if the design isn't important to you and you have a display you can use, then the Mac mini would be our preference.

Still not sure? We also look at

how the MacBook Air compares to the iMac

compare, and how the

As you will see below, you don't have to pay the full price for Macs. A number of resellers will discount even the latest models. Check the deals below to see what's on offer:

An ex-Apple PR, Karen's career highlights include interviewing Apple's Steve Wozniak and discussing Steve Jobs’ legacy on the BBC. Her focus is Mac, but she lives and breathes Apple.

How Windows 365 is bringing Windows to Mac, iPad and iPhone

Hi. I saw this on Macworld UK and thought you should see it too.