an Apple event next week

, and it’s looking fairly likely that we’ll see updated models of the iPad Pro and perhaps the iPad Mini.

Which is great, because it made me think about the Eee PC, which was either one of the greatest short-lived success stories in tech history or a collective delusion shared by a handful of late 2000s tech bloggers that never actually happened.

There were two products that arrived in 2007 that fundamentally changed computing: one, of course, was the iPhone. The second, obviously more important product was the $399 Eee PC 701. It originally ran a custom Linux operating system that reviewers loved (

it was “ten times simpler to use than any Windows notebook”) and was generally heralded as a new kind of computer with tremendous mass appeal. Spoonauer: “Pound for pound, the best value-priced notebook on the planet.”

Again, this was a weirdo little two-pound plastic laptop that ran

that was basically a front for various websites. (We hadn’t invented the phrase “cloud services” yet.)

Windows getting shown up by Linux was not allowed, so Microsoft did some Microsoft maneuvering, and by January 2008 the Eee PC was running Windows XP instead. It was also part of a larger category called “netbooks,” and we were all made to know what netbooks were.

This Eee PC ran a “Pine Trail” processor so Joanna photographed it with pine branches. This was state-of-the-art tech blogging in 2009.

A little later, Microsoft created something called Windows 7 Starter, which was a hilarious cut-down version of Windows just for netbooks — you weren’t even

allowed to change the desktop background

! — and the netbook explosion was unstoppable. My friend (and Verge co-founder) Joanna Stern built the early part of her career obsessively covering netbooks, first at

, and then with me at

Do you remember when the Nokia Booklet 3G was going to reinvent Nokia? You do not, because it didn’t.

And there was a lot to cover: at one point Joanna noted that Asus had put out

. And that was just Asus! Dell, HP, Lenovo and others all chased after the netbook idea furiously. Do you remember when the 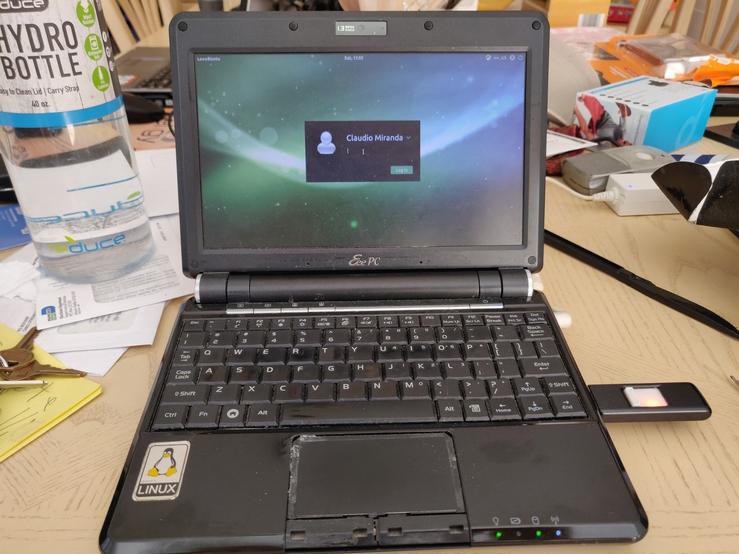 was going to reinvent Nokia? You do not, because it didn’t. It was very pretty, though. I asked Joanna about this moment in time, and this is what she sent me:

“I was basically Bono in this ‘I Still Haven’t Found What I’m Looking For’ video. Eee PC after Eee PC. MSI Wind after MSI Wind. Toshiba whatever it was called after Toshiba whatever it was called. I was constantly looking for a netbook that had a keyboard that didn’t require doll hands, a trackpad that didn’t leave a blister on my thumb, a hard drive that didn’t take three days to open Microsoft Word. It was a constant search for the perfect blend of price, portability and power.”

Joanna then demanded I embed the actual YouTube video of U2’s “I Still Haven’t Found What I’m Looking For,” which is exactly the sort of “wow that was really important once” energy this blog post needed.

The netbook explosion was all the more odd because every netbook had the same basic specs, as Microsoft charged more for a standard non-Starter Windows license if a computer had anything more than a 1.6GHz Intel Atom processor, 1GB of RAM, and a 160GB hard drive. So it was all colors and screen sizes, really. All to run a deeply-annoying version of Windows, on a computer that no one was even remotely claiming could replace a primary PC. By the end of it all, as the chips inevitably got more powerful, enough laptop vendors were telling Joanna that their new netbook-like computers

netbooks that she started calling them “

And then the iPad came out in 2010, and netbooks were inexplicably such a part of the computing vocabulary that Steve Jobs introduced the iPad

by explicitly saying that netbooks were bad

. “The problem is netbooks aren’t better at anything,” is a real thing Steve Jobs said on stage, in order to clearly distinguish the then-new iPad from netbooks. It was important to him!

Did any of this even

? I remember it all, but I can’t tell if it meant anything, or if we all just believed Microsoft and Intel were so mysteriously powerful that we had to live in their product frameworks and 160GB of maximum hard drive space. Did anyone actually

a netbook? The only people I ever met who had netbooks were other tech writers; at one memorable trade show my colleague Adi Robertson showed up with

a tiny netbook, two laptops both perfectly ill-suited for the tasks at hand.

I asked Joanna, who is now a senior personal technology columnist at the

, about all this, who replied: “Let’s be clear here. Apple’s coming event this week is actually about netbooks. The iPad Pro is an outgrowth of the netbook movement a decade ago.” Was she joking? I don’t know, and she wouldn’t tell me.

Now, of course, there aren’t any netbooks, but everything is a netbook. The iPad is the iPad, with multiple models at various sizes and price points, and a furious ongoing debate about whether it can replace a laptop. (See? It’s a netbook.) Chromebooks exist, and both Apple and Microsoft worry about them in familiar ways. We are surrounded by appliance-like cheap computers that run goofy custom interfaces to cloud services on top of open-source operating systems — that’s an Echo Show, or a Google Chromecast, or even an Oculus Quest 2. Netbooks. Intel is badly in need of a reinvention and Windows itself is diminished; Microsoft would happily

if anyone would go along for that kind of ride.