High school was a time I looked at those in school uniforms with envy. Though boring, they looked like high social class owning wealth with which I was not familiar. Those uniforms said “good grades” to me.

It was like wanting to be something you’re not, something that no one had even seen in real life, something that would mean that you were only judged based on how good or bad the personality was as well as the face. But never what you wore. It seemed like something where anyone could fit in if they wanted to.

But then again, those who sported their uniforms wanted to taste the freedom of wearing whatever they wanted to at school. The freedom of the public-school dress code seemed nice, a different strategy. The chance to become an individual instead of another pair of khaki pants.

High school. It felt like a fever dream. It was here and then gone. I don’t remember much. It’s one of the few times that I’d never leave the house again if it meant that I wouldn’t have to go back. Sure, that’s a little dramatic, but that’s what high school is all about. Well, at least that’s what it should be.

For a public school to be publicly funded (through taxes like income and sales), some try to act like a private school with their dress codes. In fact, more than half of public schools have some sort of dress code, according to the National Center for Educational Statistics. On top of that, a little under 60 percent of schools have “strict dress codes.” In turn, this leaves little room for the dramatics and excessive creativity of high school. Which, honestly, is a big part of high school. The kids get to look back and be embarrassed by their fashion choices. It’s an American public-school tradition and should be celebrated (and allowed) as such. 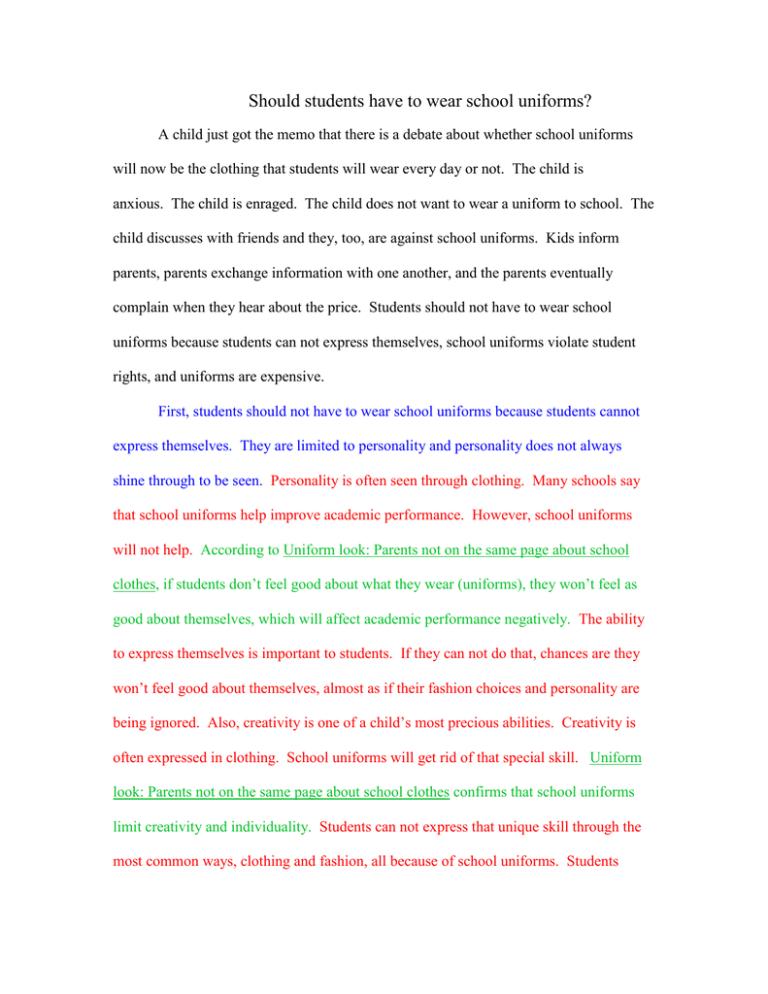 But there is something strange about setting a strict dress code in high school. The kids have no other choice but to go unless they want their parents fined or thrown in jail. Sure, I think everyone understands the basics of dress codes. Don’t show anything that clothes are designed to cover. Yet, when the same code is applied to hair, makeup and other grooming, maybe a line is crossed. If they can’t show expression in clothing, then let it be shown in other ways that aren’t inappropriate. Pink hair? That’s cool. Orange hair that looks like a highlighter? You might laugh at it when you get older, but it sounds fun.

Then some folks sigh and say, “Oh, but they won’t be able to wear that in the real world.” Oh, but isn’t that the point? These kids are in their last few years of a small slice of liberty and freedom before they get sucked into the khaki-fitted corporate world. Until then, they should be able to express themselves as such. Just because we live in the office world doesn’t mean that the remainder of their childhood should be bland, too. They can have that for the other half of their lives.

I might have looked at school uniforms with envy growing up. Now, I understand the freedom we had. Sure, we couldn’t wear whatever we wanted, but we could always look how we wanted. We had the power of public-school creativity (and bad choices). And that’s what it’s supposed to be. It’s time for public schools to stop acting above their nonexistent tuition fees.

— Hannah Morgan, a native of Wyoming County, is attending WVU in pursuit of a career in journalism. Her email is hannahmorgan13943@hotmail.com.