The liquid-cooled Asus ROG GX800 pushes the performance envelope of gaming laptop even further and while distancing itself from a portable existence.

Last year, Asus released a 17-inch liquid-cooled gaming machine, and as far as

, that gaming laptop was absolutely mental. Now, the manufacturer has an updated model complete with a new RGB mechanical keyboard and two GPUs for even more graphical performance.

From the outside, there aren't too many apparent changes. The GX800 looks almost completely identical to its 17-inch predecessor and the same goes for its liquid-cooling base.

The only difference you'll really notice on the outside of the machine is the new multi-colored keyboard, which allows you to customize and tweak the keyboard backlight on a per key basis.

What's more Asus has introduced its MechTAG (Mechanical Tactile Advanced Gaming) to give it a mechanical feel. There's also anti-ghosting technology to prevent any of your keystrokes from falling through the cracks when inputting multi-key commands. 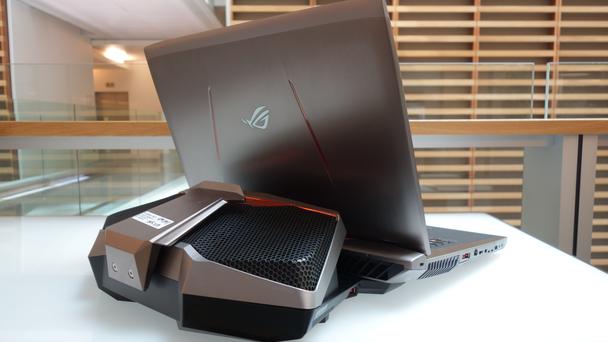 Now the bigger changes are on the inside with hardware upgrades. The ROG GX700 already seems plenty powerful with a desktop-grade Nvidia GTX 980, however, the GX800 introduces a second GPU along with Intel Core i7 K-series processors.

At a Computex 2016 press event, we got to play games at a silky smooth frame frame rate even at 4K. This is largely thanks to the GX800's GPU cores being unlocked when attached to its liquid-cooled base.

Asus calls this Thermo Hydro Clocking, and aside from the pretty name, it allows the system to fully tap into the power of its Nvidia GTX 980s and reach a 1,428MHz frequency without overheating.

Beyond the graphics chips, the liquid-cooling system also allows the rest of the GX800 to reach its full potential including. The processor can be clocked up to 4.4GHz and the memory can fully max out at 2,800MHz.

According to Asus' figures, the GX800's second GPU essentially doubles the graphical performance the machine compared to its predecessor. And that's only with two Nvidia GTX 980s, the numbers could be become astronomical with a pair of Titan X-beating Nvidia GTX 1080 chips when it inevitably comes to laptops.

Of course, for all this power, the Asus ROG GX800 eats up just as much energy. The laptop actually comes with two 330-watt power supplies meaning this 'gaming laptop' uses as much energy as a mid-range PC tower.

One of my biggest qualms with the Asus ROG GX700 was the fact that it's hard to categorize it as a gaming laptop when it requires the liquid-cooling dock to really game. The GX800 doesn't solve this problem and instead pours on with more over the top hardware and extreme power needs that will undoubtedly destroy its potential battery.

I personally love the absolute ridiculous nature of it, but this isn't a gaming desktop for the meek or average gamers. I also have to see how well it does in benchmarks and other gaming tests before I can recommend it to hardcore gamers or the most extreme power users of gaming laptops.

What is a hands on review?

Hands on reviews' are a journalist's first impressions of a piece of kit based on spending some time with it. It may be just a few moments, or a few hours. The important thing is we have been able to play with it ourselves and can give you some sense of what it's like to use, even if it's only an embryonic view. For more information, see