(Pocket-lint) - Almost a year on from its launch the Creative Zen Plus has been upgraded, but it's not just a case of the company adding more memory or offering a colour change to entice users. Somehow while keeping the size small, the company has added a speaker so you can share your music. Thing of fad or amazing technical prowess? We get listening to find out. For those not aware of the MP3 player from Creative here's a quick recap: the Creative Zen Stone Plus is a available in 2GB and 4GB versions, offers a small OLED screen, FM radio, a recording option, timer and stopwatch functions. Songs can be transferred via drag and drop and you can even manage your playlist via Apple's iTunes software although you won't be able to transfer DRM tracks. Admittedly, the circular screen is small, heck so is the player, but it's enough to see what is going on with your tracks, choose the track that you want next and adjust the volume. It also means you can scroll through the player's options like the recording mode. That recording mode is basic but enough for you to make notes if you're out and about, or merely record your mates saying something blackmail worthy. A year on and from an interface point of view nothing has changed. You can still browse the device and folders you've set up for your albums, although you can't search via artist or anything that isn't created by you. Overall the player is still very easy to use and still incredibly small. But this isn't just the Zen Stone Plus, but the Zen Stone Plus with speaker and from a design point of view the player now adds three grill bars on the back where the sound comes out. Surprisingly it sounds pretty good, a touch on the tinny side, but hey it's a mini speaker on the back of a mini MP3 player that will set you back just £50. The only catch we can see with the design is that in-use we found ourselves laying the player on the desk with the speaker facing downwards. While on a wooden desk this has helped amplify the sound, on a notepad it muffles it. A kickstand in the design as seen on the Nokia N96 would have been a great addition. The speaker can be turned on and off accordingly at the press of the button and headphones plugged in via the 3.5mm jack at the top.

The Zen Stone Plus is a great little MP3 player that will support a number of file formats including unprotected AAC files (including iTunes Plus). We loved the first iteration here at Pocket-lint and the addition of the speaker is a welcome one. It's not going to be enough to provide music for a party, but in a hotel room or like a chav on the back of the bus, this will do nicely. 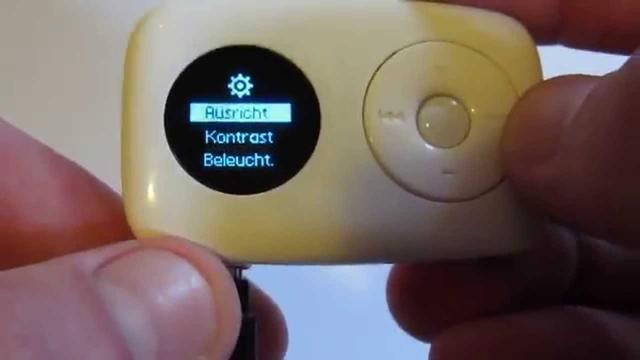