COVID-19 vaccines were not developed overnight. Here are the astounding stories behind mRNA vaccines.How could anything developed this quickly be safe?

For many Americans, the arrival of COVID-19 vaccines less than a year after the pandemic began is, quite literally, unbelievable. That skepticism, in turn, is contributing to hesitancy to get the shot — especially among those concerned that the most widely used COVID-19 vaccines rely on messenger RNA, or mRNA, to induce protection. This is the first time that any mRNA vaccine has been approved for human use.

But the development of mRNA vaccines against COVID-19 is no overnight success. In fact, they have a remarkable back story stretching back decades. Without one researcher’s determination, two companies with vision, a longtime network of university labs, and decades of taxpayer funding in treatments for influenza and HIV, particularly by the United States’ National Institutes of Health, COVID-19 vaccines might still be years away. Even then, it took a massive, unprecedented investment by the U.S. government to get these shots from labs into arms faster than ever before.

The remarkable success we have seen over the past few months in slowing the COVID-19 pandemic in the United States can be traced back to these four parallel stories and one big bet from the U.S. government.

1. mRNA vaccines: an idea more than 30 years in the making

When Katalin Karikó, Ph.D., came to the United States from Hungary in 1985, she brought with her a passionate determination to work on mRNA. Messenger RNA is fundamental to life: sets of blueprints, spelled out using four nucleotide “letters,” for building every protein in every life form on Earth. Karikó’s big idea was to produce proteins at will by injecting mRNA into cells, but her experiments did not work for a long time. Lack of success forced her to rely on one senior scientist after another to support her work, while she made only meager wages.

In 1998, Karikó partnered with Drew Weissman, M.D., Ph.D., at the University of Pennsylvania. Weissman was interested in developing an HIV vaccine based on mRNA. After many failures, Karikó and Weissman learned that natural mRNAs use small amounts of slightly modified nucleotides, in addition to the four standard nucleotides. When the scientists inserted the modified nucleotides into the mRNAs they were using in their research, they began to find that these modified mRNAs produced proteins efficiently without causing undesirable side effects. They began to publish their findings, starting in 2005. By the time the coronavirus that causes COVID-19 showed up in 2020, Karikó and Weissman were already working on an influenza vaccine based on their mRNA technology. 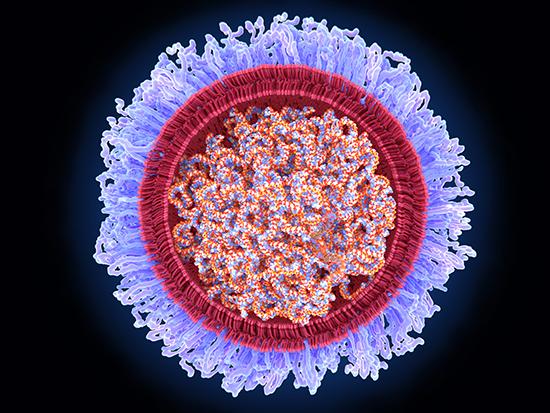 It can take years for lab breakthroughs to become market-ready products, and this is exactly what happened with mRNA. Soon after Karikó and Weissman’s work was published in the mid-2000s, visionary companies recognized the implications of mRNA for vaccines and quickly licensed the technology. Moderna was founded in 2010 to produce vaccines based on the new mRNA technology, and the company had been growing as a vaccine manufacturer when the COVID-19 virus appeared.

Moderna was not the only one working on an mRNA approach to vaccines. BioNTech is a German company established to work on immunotherapies in 2008 by a Turkish couple, who immigrated to Germany. Like Moderna, BioNTech recognized the value of the mRNA technology for vaccine design years ago and licensed the technology. In 2013, BioNTech hired Karikó as a vice president and began to develop mRNA technologies for use against many diseases. BioNTech’s efforts in vaccine development greatly increased in 2018, when Pfizer joined BioNTech’s effort with a research and development agreement to develop mRNA-based vaccines against influenza. It was a natural collaboration because Pfizer, a U.S. company in New York, has been a major vaccine producer for a long time. When the pandemic began, Pfizer/BioNTech immediately turned their attention to developing vaccines against COVID-19.

Moon Nahm is a professor in the Department of Medicine at the University of Alabama at Birmingham, and directs a World Health Organization pneumococcal vaccine reference laboratory. He has studied pneumococcal infections and pneumococcal vaccines for more than 40 years, and is a former member of an NIH Vaccine and Treatment Evaluation Unit.

3. Insights from the fight against flu and HIV were crucial to COVID-19 success

However, in order to produce vaccines against COVID-19, Moderna and Pfizer/BioNTech first needed to identify the right mRNA sequences for proteins that would make suitable vaccine components. COVID-19 virus is similar to the SARS virus of 2003, and previous research of the SARS outbreak suggested potential vaccine components. Nevertheless, exact design of the actual vaccine structure was not a simple task for a small company like Moderna, or even a larger one such as Pfizer, even though the entire COVID-19 virus genome had been published by Chinese researchers in early 2020.

But here is where another decades-long scientific effort paid off: Concern about another influenza pandemic on the scale of the 1918 flu pandemic has long motivated U.S. investment in flu studies, particularly by the NIH. The NIH has also spent more than 40 years funding scientists working toward a vaccine for HIV.

The crucial sequence information needed to target COVID-19 came from a vaccine research laboratory at the NIH. The lab had been working on HIV vaccine designs for decades and had developed algorithms to identify molecular structures optimized for vaccines. This approach also predicted a successful vaccine structure against the respiratory syncytial virus. Harnessing that experience, the NIH group rapidly identified stable molecular structures optimized for the mRNA vaccines against COVID-19.

For 60 years, the NIH also has maintained a group of about 10 university laboratories throughout the country to help test vaccines against pathogens such as influenza. These clinical and scientific teams, known as Vaccine and Treatment Evaluation Units, or VTEUs, include physicians, researchers and nurses dedicated to vaccine studies and testing. Over the years, the VTEUs also have trained numerous vaccine experts, and some of these have brought their skills to universities, vaccine companies and regulatory agencies. In addition to the VTEU network, the NIH has supported an HIV Vaccine Trials Network and the AIDS Clinical Trials Network. As Moderna and Pfizer/BioNTech created their mRNA vaccines against COVID-19, these experts and vaccine study networks were recruited into rapid vaccine testing, and they enlisted tens of thousands of people willing to volunteer as test subjects. To everyone’s pleasant surprise, the mRNA vaccines proved to be extremely effective at preventing moderate and severe forms of the disease, as well as its spread.

Ordinarily, manufacturers wait for proof of efficacy before building the expensive, custom infrastructure and systems needed to produce millions of doses of a new treatment. Why make that investment if the test candidate may fail? But for the mRNA COVID-19 vaccines, the U.S. government pledged to purchase millions of doses and provided upfront money, even before the vaccine’s efficacy was determined. This allowed Moderna and Pfizer/BioNTech to build mass-production capacity, even as testing was underway.

To gain regulatory approval, a vaccine has to be tested for safety and efficacy in healthy volunteers after being shown safe in animals. Fortunately, hundreds of thousands of people the world over agreed to take the vaccine candidates. Some got a placebo, so that real-life comparisons could be made. After analyzing the massive and detailed data from these volunteers, regulatory agencies gave their nod to the two mRNA vaccines. Importantly, those trial volunteers continue to be monitored for any long-term issues, and to find out how long the COVID-19 immunity lasts.

Thus, America’s ability to rapidly produce COVID-19 vaccines did not result from luck or a short-term effort. The mRNA vaccines we have today were birthed from decades of investment and determination. Karikó’s tenacity still endures today — she rises every morning at 5 a.m. to work in her basement laboratory. Her work, and that of many other dedicated scientists, has benefited the world. Meanwhile, the long-term investment from the NIH and other funding agencies produced the manpower, organization, science and technology that were necessary to produce the vaccines that will help us win the struggle against COVID-19.

Tags： how technology has changed news photography over 40 years,