When Elon Musk announced in 2018 that he was selling branded flamethrowers to raise money for the Boring Company, his tunneling business, we

that he had "raised the bar of promotional advertising forever." The flamethrowers—cheekily branded "Not a Flamethrower" to avoid customs issues—retailed for $500. Musk sold 20,000 of them, generating a tidy $10 million. More than that, they generated massive publicity. The story was everywhere.

In the time since, Musk, now the world's richest person, has only cemented his reputation as a master of promotional marketing. Virtually all of the branded merchandise for his various companies—

—has been a hit. Sometimes, Musk merely has to

for it to have huge promotional impact. Other times, his joke products

, willed into reality by their own hype.

The Boring Company flamethrowers, though, remain Musk's Sistine Chapel, his Symphony No. 9—a masterwork of promotional marketing. And yet, to the surprise of absolutely no one, the flamethrowers have been a disaster for everyone but Musk. 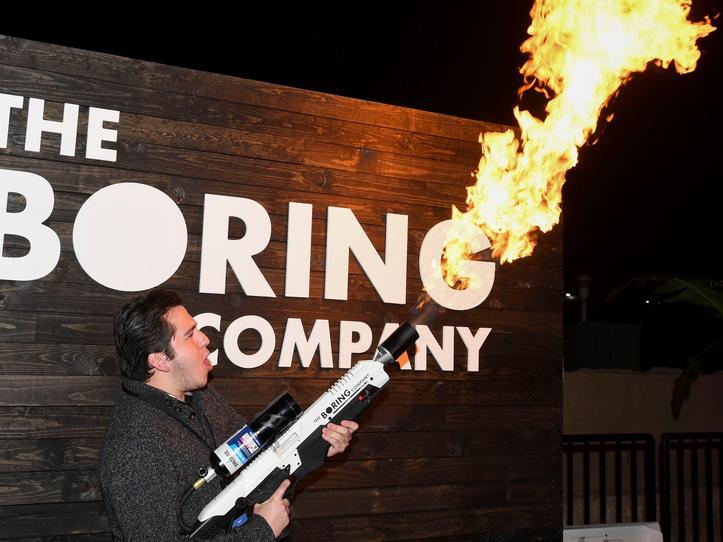 Yes, the fully functioning flamethrower—made available to the general public with no required background checks or training, and renamed specifically to circumvent customs issues—has become a massive legal liability for its owners. The TechCrunch story opens with the account of Max Craddock, an American who for some reason brought his Boring Company flamethrower on a trip to Italy, where he was arrested and detained after trying to board a party bus with it:

Craddock spent a week in prison before he was let go, minus his flamethrower. Elsewhere, the flamethrowers keep getting seized by law enforcement.

In one instance reported by TechCrunch, police charged a passenger in a car stopped for a missing inspection sticker with carrying a dangerous weapon after they saw his Boring Company flamethrower sticking out from underneath a seat. In another, FBI agents seized one while searching the home of a man who was indicted on charges of "conspiracy to riot and cause civil disorder, and conspiracy to use fire to commit a felony."

Here's one the NYPD's Emergency Service Unit seized in early 2020:

The flamethrower has also caught the attention of lawmakers. In 2019, a New York State Senator introduced a bill that would make it a felony to possess a Boring Company flamethrower. In December 2020, it

advanced to the Rules Committee

“Elon Musk’s Boring Company released a new flamethrower which sold out of all 20,000 within days, without any concern to the training of the purchasers or their reasons for buying," New York lawmakers said,

. "Allowing the general public to access this type of machine is extremely problematic. These dangerous devices should not be sold to civilians, and use needs to be restricted to trained professionals.”

In that same article, CNBC spoke to Quinn Whitehead, owner of Throwflame, a website that sells flamethrowers. Whitehead was dismissive of New York's efforts to criminalize the Boring Company version, saying it "isn’t actually a real flamethrower" but rather "just a roofing torch in an airsoft gun shell.” This is a familiar refrain among Musk defenders elsewhere on the internet.

Musk has yet to weigh in on TechCrunch's report. But, if he does, we can expect his response to be characteristically flippant and, most likely, delivered via Twitter. When the flamethrowers first launched in 2018, Musk posted a video of himself holding one, with the following caption: “I want to be clear that a flamethrower is a super terrible idea. Definitely don’t buy one. Unless you like fun.”

The irony here is that, for as predictably terrible an idea a branded flamethrower ended up being for the people who bought one, it's been a promotional gift that keeps on giving for Musk. Here we are, almost three years after the launch, talking about Boring Company flamethrowers once again. It doesn't matter that it's not good publicity. Musk has proven time and again that he doesn't care what anyone thinks of him, so long as his fanbase remains loyal.

A little flamethrower-related drama isn't likely to change anyone's mind. Especially when it's "Not a Flamethrower" to begin with.