For a good long while, Microsoft convinced us that Windows 10 was going to be their last iteration of Windows. However, it seems that Microsoft is retracting that position with the recent announcement of Windows 11. It has everything you would expect in a new update from a redesign to cool new features. Moreover, one of the biggest and most exciting updates yet is the prospect of using Android apps on Windows 11. How does it work? Here’s what we know so far.

What’s Behind the New Windows 11 Update?

Windows 11 is coming and it has all the makings of a modern desktop OS.

revealed an entirely new user interface, a different start menu, and much more. However, it seems that Microsoft did not start creating these features with Windows 11 in mind from the beginning. That’s because the UI seems strikingly similar to what they were originally planning for Windows 10X.

As you may know, Microsoft has been experimenting with revamping its UI to accommodate unconventional hardware. They’ve been hard at work trying to make Windows run seamlessly on dual-screen devices like the Microsoft Duo. Simplifying the UI was one of their main priorities. However, it seems like plans have changed from redesigning Windows 10 to creating an entirely new Windows 11 update altogether.

The result is a newly refined OS design with brand new features that we’ve never seen — including Android app compatibility. Of course, we’ve only had the first glimpses of the OS so far and there are more changes to come. However, the new features are already exciting for Windows users all across the globe.

Windows 11’s visual changes are the most apparent at first glance. The taskbar now hosts the Start menu and other icons along the center, similar to macOS. Moreover, the tray area is cleaner and there are no longer any Live Tiles when you open the Start menu. All you’ll see are your recent files, pinned apps, and the quick settings for shutting down or restarting the device.

Of course, design changes to Windows have been a hit-or-miss thing in the past. For example, users reacted with great disgust when Windows 8 revealed its horrifying tile layout. On the other hand, users loved the new clean aesthetic on Windows 10 when it first launched.

Likewise, Windows 11’s redesign may come with both fans and haters. However, Microsoft did think ahead and added the option to reorient the task bar’s icons to the left. Nonetheless, the other visual changes remain the same with only the orientation being flexible (so far).

On the other hand, Microsoft is also focusing on rounding off corners and edges throughout Windows 11. Whether that’s in the context menus, Explorer, or even apps, you’ll notice rounded corners everywhere reminiscent of mobile OS designs.

Everything You Need to Know About Windows 11 (Preview)

Apart from the redesign, there are also many other features Windows 11 brings to the table. However, one of the most prominent and exciting ones is the ability to use Android apps on Windows. Users can find these new Android apps in Microsoft’s new app store launching with Windows 11.

Of course, some people might claim that you can already use Android apps on Windows 10. However, that method wasn’t as fluid and smooth because it required you to use the “Your Phone” app. On the other hand, this time Windows 11 is bringing Android apps natively via the Amazon Appstore. Hence, you won’t need a separate Windows 11 Android emulator to find your favorite apps.

Unfortunately, Microsoft’s roundabout way of partnering with the Amazon Appstore does come with its drawbacks. That’s because Amazon’s app store is nowhere near complete and doesn’t support all 3.5 million Android apps currently available. In fact, Amazon’s store only supports around 500,000 Android apps as of the time of writing. Thus, you won’t be able to use all your Android apps on Windows 11 — at least, not natively.

How Will Windows 11 Provide Android Apps?

The partnership with Amazon might make it seem like the Android apps won’t run as seamlessly. However, it looks like the Amazon Appstore will naturally blend into Windows 11. Based on the announcement, these Android apps will readily be available on the Windows store. Moreover, you can easily pin them to the taskbar or snap them next to regular Windows applications.

On the other hand, we’ve already mentioned how limited the Amazon Appstore is compared to the Google Play Store. However, there is a silver lining, which is the ability to sideload apps. We’ll talk more about that later on. For now, at least you can potentially access apps like Snapchat that aren’t available on Amazon’s store.

Moreover, it’s also possible that Amazon will take advantage of this situation to improve its app store offerings. Currently, only Fire devices use Amazon’s Appstore to run Android apps. However, things could change and Amazon could take this opportunity to expand its library. Although this is still a “maybe” as it’s mostly just something we hope to see down the line.

Architecture-wise, Microsoft seems to be working with Intel to make sure these Android apps run properly on Intel computers. Of course, Microsoft also says that these apps will also work with AMD and Arm-based computers. Hence, all desktops and laptops, regardless of processor, should be able to run Android apps on Windows 11. 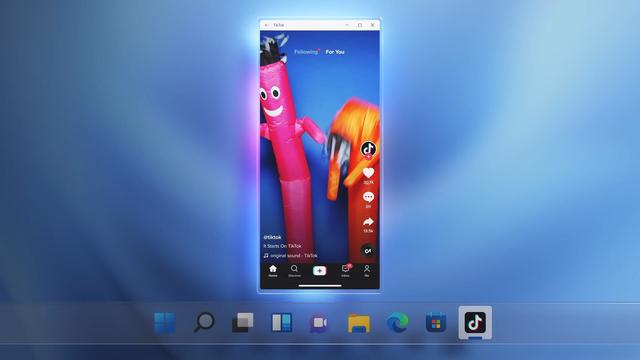 While the Windows store will be limited to Amazon’s Appstore, Windows 11 itself won’t be. That’s because you can sideload Android apps on Windows 11 without having to download them natively through the store.

Right now, this idea is still a little vague and unclear. It’s great that you’re not limited to Amazon’s limited library of Android apps. However, the process is still up in the air with no word on Microsoft’s end.

On the other hand, the ability to sideload Android apps also has some poor implications. That’s because, as of right now, we’re still not sure how we’re going to sideload apps on Windows 11. Hence, it raises the question of whether you can pirate apps through the sideloading method. This wouldn’t be an issue for free-to-install apps like Snapchat. However, paid apps might be pirated by users if the sideloading method doesn’t have the necessary security measures.

Moreover, Microsoft is yet to lay down any safety mechanisms in place for sideloading apps. Android app developers don’t usually offer APK files to allow for sideloading on Windows. Hence, end-users might download shady APK files from unofficial and unreliable websites. Bad actors might use this method to sneak harmful malware into people’s computers. This wouldn’t be a problem if Microsoft could screen and scan these sideloaded apps like the Google Play Store.

Of course, all of these would have been baseless fears had Microsoft partnered with the Google Play Store instead. Nonetheless, it’s a good step forward that we’re getting both sideloaded and native support for Android apps on Windows 11.

For the majority of end-users, running Android apps on Windows 11 is just a convenient feature. Applications that focus on mobile no longer need to rework their app as much to bring access to Windows. Moreover, users don’t need to deal with shoddy or incomplete functionality on web-based apps like Instagram for desktop.

In addition, workflows that rely on integration between mobile and desktop operating systems become much easier. This is especially important for Android app developers that need to test their apps during development.

On the other hand, some apps just work a lot better with a keyboard and mouse involved. Moreover, mobile gamers can finally play their favorite Android games right on their computer. This also makes streaming mobile games on Twitch a lot easier because it eliminates a lot of the workarounds.

Why Bring Apps to Windows: Answer to Apple’s M1 Macs

It might be kind of strange seeing Microsoft make this shift to allowing Android apps on Windows 11. However, once you consider the current trajectory of the computing world, it’s not so surprising.

You see, Apple has been trying to marry its mobile and desktop operating systems for a while now. The company has been making powerful mobile processors for its iPhones and iPads for years. Finally, in late 2020, Apple released its first

using their in-house mobile processor. One of the most promising consequences of this move was the ability to run iOS apps on macOS.

In light of this, it’s not surprising that Microsoft is headed in the same direction. Microsoft has also been working on pushing developers to rework software for Arm-based devices for a while. This was especially evident when Microsoft chose to unveil the Surface Pro X.

However, developers have yet to jump on the project because Microsoft doesn’t exactly have a hold on all Windows laptops. A majority of Windows computer manufacturers still use traditional processors to create their products. Hence, software developers don’t exactly have a proper stimulus.

Nonetheless, it seems that Microsoft isn’t giving up and pushing forth toward the future. With Windows 11, it seems Microsoft is intent on bringing some of the mobile experience to the desktop. It’s also a welcome addition because most web-based apps to accommodate desktop users are usually less than perfect.

For example, apps like Instagram don’t provide full functionality on the web app. Moreover, apps like Roomba, Venmo, Ring, and Snapchat are non-existent on the desktop operating system.

On the other hand, you could argue that Microsoft has been planning this for years even before adopting Arm-based processors. In fact, in 2015, they created Project Astoria which aimed to rework and port Android apps to Windows. However, the project fell through not too long after it was announced.

This didn’t stop Microsoft as they were still hung up on the idea when they launched Windows 10. In fact, the company was planning on providing this feature on Windows 10 a little before it was released. However, Microsoft instead opted to push developers to adopt the Universal Windows Platform, which also failed down the line.

Thankfully, now with Windows 11, Microsoft will finally realize its long-time dream. The company has been thinking of Android as the mobile version of Windows for years. It seems that this time, there will be some more concrete links between the two.

Will Your Computer Be Able to Run Windows 11?

Android apps — along with Windows 11’s other improvements — make the big release very exciting for Windows users. However, it’s not exactly clear which existing devices will support Windows 11. Of course, devices sold after Windows 11’s launch should have the operating system by default. However, it’s hard to say which currently existing systems can adopt it.

It’s exciting to see Microsoft work on a new version of Windows because of all the improvements and new features. However, Windows 11 isn’t exactly here just yet and is set to release this holiday season. Compatible Windows 10 devices should be able to upgrade later in the year.

More Work to Be Done

Microsoft shook the world when it announced Windows 11 and the ability to download Android apps on the platform. However, they haven’t sorted out the details of this new feature. Amazon’s app store library still limits native support for Android apps. Moreover, Microsoft even says that not all of those apps will be able to run on Windows 11.

On the other hand, being able to sideload Android apps seems to be a decent solution to this problem. However, the method is unclear and a little problematic. Nonetheless, this whole ordeal with Windows 11 seems to be a step in the right direction. The tech world wants to marry mobile and desktop operating systems. This is proof and we can’t wait until Windows 11 drops later this year.