The new iPhone X and

support wireless charging for the first time in an Apple smartphone – but what is it, how does it work and is it worth using?

How do I wirelessly charge my phone?

Wireless charging means, as the name suggests, you no longer need to plug a cable into your smartphone to charge it. Simply placing it face up on a special mat or tabletop is enough to start charging up your smartphone’s battery, be it the

or any number of different smartphones that support wireless charging.

What do I need?

The second is a wireless charger. These little pucks or mats come in various shapes and sizes, from larger mouse mat-like things to small discs built into furniture, and are available from about £10.

In most cases wireless charging is slower than charging via a cable for smartphones that include fast-charging technology, such as the

Some wireless chargers are faster than others, with modern higher-powered chargers capable of fully charging a large battery smartphone in around two hours. They’re typically rated by wattage, with 5W and 10W chargers common, or by output amperage, with 1A at 5V wireless chargers comparable to a standard 1A USB cable charger such as that that comes with the iPhone 7.

There are a couple of competing standards in the wireless charging industry designed for portable gadgets such as smartphones. Most smartphones support both the Wireless Power Consortium’s Qi and the PMA or AirFuel Alliance standards, meaning that they will work on most available chargers.

Qi is rapidly becoming the most popular wireless charging standard, and the one used by Apple for its new iPhone 8 and

How does it work?

Wireless charging works by transferring energy from the charger to a receiver in the back of the phone via electromagnetic induction. The charger uses an induction coil to create an alternating electromagnetic field, which the receiver coil in the phone converts back into electricity to be fed into the battery. 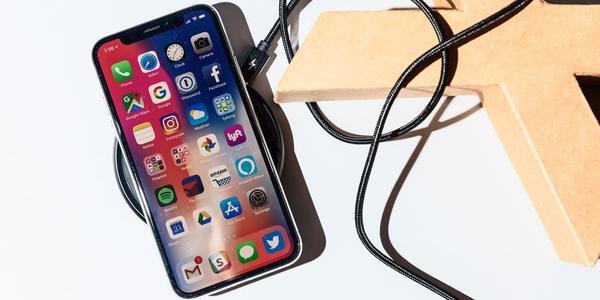 They typically have to be in close proximity to each other and correctly aligned over the top of each other, although a set orientation is normally not necessary.

Rechargeable toothbrushes and other bathroom accessories have used inductive charging since the 1990s.

Other than the iPhone 8 and X, what supports it?

Wireless charging has been built into smartphones since the Palm Pre in 2009, with some of

A variety of smartwatches, including the

Watch, Moto 360 and LG Watch Style, can only be charged wirelessly, while some tablets such as the Nexus 7 supported wireless charging.

Some laptops can also be charged wirelessly, but are typically incompatible with the technologies and standards used for smaller gadget charging.

Does the phone heat up?

Yes, most phones and some chargers heat up slightly on the back where the wireless charging is taking place.

Smartphones typically heat up slightly when being charged via cable, so the difference is small in most cases and isn’t anything to worry about.

If it starts getting really hot, though, it could be a problem with the battery, as with Samsung’s

Are there any downsides?

The biggest downside is that wireless charging cannot be performed through metal with current technology. That means most wirelessly charging smartphones have either plastic or glass backs, the later of which makes them more fragile.

It also may not work through thick cases, although generally does through thin plastic cases, dependent on the phone and the charger.

Is wireless charging going to be a big thing?

The short answer is no. As long as the charger matches the wireless charging standard supported by your smartphone you can use any wireless charger.

Apple’s AirPower wireless charger can charge more than one Apple device at the same time, including the Apple Watch and AirPods, with its new wireless charging case.

iPhone X: even an embarrassing launch glitch can’t knock Apple off the top