Today’s displays offer a ton of features. We have come from the flickering and laggy displays of yesteryear to super quick displays that respond faster than most of us can notice. However, with that many new features coming in, what also came in was a new set of problems. As display refresh rates and GPU frame rates increased, displays started needing help to keep the two in sync. That’s where AMD FreeSync comes in.

Over the years there have been many display synchronization technologies that have aimed to solve screen tearing and other display artifacts. Being one of the two major GPU makers, AMD has its own solution. We know it as FreeSync. Let’s take a deeper look at how it works, and if you should be using it.

AMD GPU guide: All AMD GPUs explained, and the best AMD GPU for you

V-Sync and the evolution to FreeSync

One of the most important parameters of a display is the refresh rate, which is the number of times your monitor refreshes every second. Close to it is the frame rate, which is the number of frames the GPU renders per second. When the two fail to synchronize, the display can end up getting artifacts like screen tearing, stuttering, and juddering. This is where screen synchronization technologies come in.

FreeSync is a rather recent entrant in the display synchronization space. There have been several before it. The starting milestone was V-Sync, a software-based solution. It worked by making the GPU hold back the frames in its buffer until the monitor was ready to refresh. This was a solid beginning, and worked fine on paper, but came with a glaring downside.

Being a software solution, V-Sync could not synchronize the frame rate and refresh rate quickly enough. Since the screen artifacts occur mostly when the two rates are high, this led to an unacceptable problem — input lag.

One of the big breakthroughs in this area came from the Video Electronics Standards Association, a.k.a. VESA. VESA introduced Adaptive-Sync in 2014 as an addition to the DisplayPort display standard. AMD in 2015 then released its own solution, based on VESA Adaptive-Sync, called FreeSync.

It relies on a technology that has become quite popular in recent days — variable refresh rate (VRR). With VRR, FreeSync can dictate the monitor to drop or raise its refresh rate as per the GPU performance. This active switching ensures that the monitor doesn’t refresh in the middle of a frame being pushed out. This takes care of the screen artifacts like tearing, stuttering, and other inconsistencies that can pop up when there is a lack of sync.

FreeSync, of course, needs to forge a connection between the GPU and the monitor. It does this by communicating with the scalar board present in the monitors. It does not need specialized dedicated hardware in the monitor, making it an easier implementation in the world of display synchronization technologies.

GPU vs CPU: What’s the difference?

FreeSync — the most basic of the three tiers, promises a tear-free experience and low latency. FreeSync Premium also promises these features but raises the bar for the display characteristics. It needs at least a 120 Hz framerate at a minimum resolution of Full HD. It also comes with low frame rate compensation, which kicks in when the frame rate falls below the minimum refresh rate of the monitor. In this case, FreeSync duplicates the frames to push the framerate above the minimum refresh rate of the monitor.

Lastly is the FreeSync Premium Pro tier. Formerly known as FreeSync 2 HDR, this tier adds in an HDR requirement. This means the monitor needs a certification for its color and brightness standards, which include the HDR 400 spec. The display panel needs to hit at least 400 nits brightness. In addition, this tier requires low latency with SDR as well as HDR.

There’s a wide range of monitors that support this technology. You can find the full 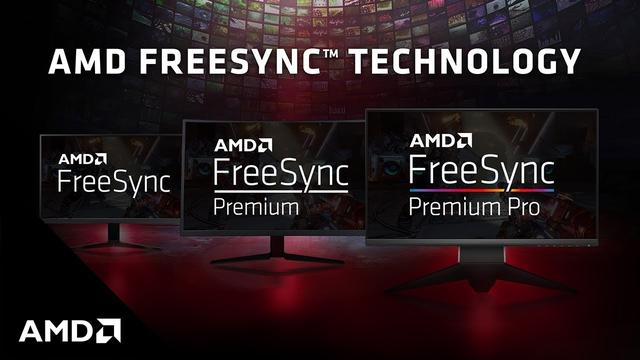 Gaming monitor vs TV: Which one should you buy?

To be able to use AMD FreeSync, you will need a compatible laptop, or a compatible monitor/TV, and an AMD APU or GPU. You’ll also need the latest graphics driver.

Compatible GPUs include all AMD Radeon GPUs, starting with Radeon RX 200 Series, released in 2013. Radeon consumer graphics products that use GCN 2.0 architecture and later are supported. All Ryzen APUs are also supported. The Xbox Series X/S and Xbox One X/S also support FreeSync. FreeSync runs over a DisplayPort or HDMI connection.

AMD says other GPUs that support DisplayPort Adaptive-Sync, like Nvidia GeForce Series 10 and later, should also work fine with FreeSync. Nvidia GPUs support FreeSync under the G-Sync Compatible label, so if you have one of those displays, you should be covered.

AMD vs Nvidia – what’s the best add-in GPU for you?

G-Sync is Nvidia’s display synchronization technology that uses a custom proprietary board instead of the typical scalar board FreeSync uses. It thus has a solid lead on G-Sync, to begin with, given the fact that it doesn’t need dedicated hardware. This means FreeSync has wider support, and it also doesn’t come with royalty fees attaches, making it the more affordable option.

FreeSync is thus arguably the best display synchronization technology in the market. However, since Nvidia has more market share with GPUs, G-Sync has become a pretty common occurrence as well. For someone looking to buy a new monitor but not sure about their choice of GPU, it would make more sense to go for a G-Sync Compatible monitor, since those include FreeSync support.

Want to read more about PC components and the surrounding technology? Check out these articles next:

AMD vs Intel: Which one is better?

AMD CPU guide: All AMD processors explained, and the best AMD CPU for you