(Pocket-lint) - While screens on your mobile phone or MP3 player are getting bigger, they are still incredibly small when it comes to watching content on. Vuzix believes the answer is a pair of sunglasses with a built-in TV screen.

Like the company's previous models in its iWear range, the new AV230XL is worn like a pair of glasses. Thinner than your average Ray-Bans you will, it has to be said, end up looking like Geordi from Star Trek: The Next Generation.

Sound is provided by two earphones already connected to the device and the AV230XLs are connected to your iPod, MP3 player or other device via a single video out cable.

Realising there are plenty of devices on the market with varying connectors, you get a couple in the box, so you can connect it to your iPod, or a composite audio/video cable for a portable DVD player.

Everything is then controlled via a dongle that sits in your pocket giving you volume and picture setting options. Picture settings include not just brightness, but contrast and saturation adjustments as well. The settings dongle also doubles as the housing for the AA battery that powers the glasses, lasting around 5 hours, it's enough to watch a couple of movies.

The AV230XL promises to display a private screen equivalent to a 44-inch television when viewed from the same distance, whilst the OLED used provides a brighter more vivid screen than the standard LCDs we've seen in devices from Vuzix and other companies before. 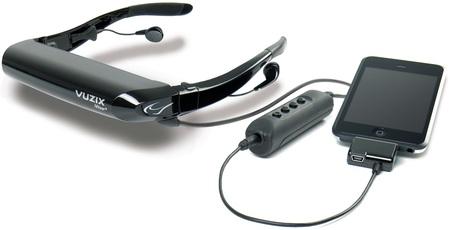 Sounds great doesn't it? In theory it is, but in practice it's not.

The glasses are heavy even when you wear the accompanying head strap to try and distribute some of the weight, the headphones mediocre, and the overall experience very disappointing.

While the screen does give you the impression you are watching something a lot bigger than it actually is, we found it hurt our eyes focusing on something that small and that close.

Combine that with the weight of the glasses - everything sits on an unpadded bridge on your nose and it's not great. Even after just 10 minutes of watching fatigue starts to creep in.

Then add to that the fact that while wearing them you look like an idiot - especially on the train - and the knowledge that you can't do anything else because you won't be able to see, and the AV230XL are only going to be something that you're forever ridiculed for.

This is one of those devices where the concept sounds amazing, but whatever gloss or sheen the company puts on it, this is only for the brave and crazy.