for your favorite PC games to come to Switch? Valve today unveiled its rumored

The Steam Deck’s big pitch is on-the-go, faithful PC gaming, but it’s taking an even bigger swing: It’s basically a handheld PC. Users can install and operate PC software on it, like a web browser, other game stores—

the Epic Games Store—and video-streaming services. It can be connected to a monitor and other gaming peripherals, such as a keyboard and mouse (a dock contains ports for these, plus Ethernet). And thanks to its Cloud saving feature, players can easily pick up game save files between their Steam Deck and PC. A user’s existing Steam library will live on it, basically immediately upon logging in, because it operates off a modified SteamOS. So not only can players download games like

, they can chat with Steam friends and trawl through Steam’s community fora.

“We don't think people should be locked into a certain direction or a certain set of software that they can install,” Valve designer Lawrence Yang said to IGN

. “If you buy a Steam Deck, it's a PC. You can install whatever you want on it, you can attach any peripherals you want to it. Maybe a better way to think about it is that it's a small PC with a controller attached, as opposed to a gaming console.”

The Steam Deck looks exactly how we’ve come to expect of modern portable gaming devices: a rectangle with two thumbsticks and a 7-inch LCD touchscreen—though almost an inch larger than the Nintendo Switch’s. Its resolution is 1280 x 800 pixels, and its display has a 60-Hz refresh rate. Unlike the Switch, the Steam Deck has two square trackpads for “PC games that were never designed to be handheld,” Valve writes in its

. That trackpad, plus the console’s gyro capabilities, should help with aiming, shooting, and moving games’ cameras around. Despite trackpads’ bad rep, Valve says the Steam Deck’s will have 55 percent better latency compared to the Steam Controller.

A little surprisingly, the Steam Deck also features four rear buttons on the back of the console—something Xbox Elite controller obsessives have been proselytizing for years. They will function much like a keyboard and are totally customizable depending on users’ keybinding preferences.

The Steam Deck comes with 64, 256, or 512 GB of storage, depending on the model, plus microSD card slots—helpful for installing enormous games optimized for PC, like

may not even fit

on that 64-GB base model. It’s got 16 GBs of RAM and advertises a battery life of between seven and eight hours. After a hands-on with the device, IGN’s reviewer said it stayed “comfortably cool” throughout all games, including ones like

custom-built by AMD for Valve

) to that of an Xbox One or PlayStation 4. Its reviewer said the Steam Deck is able to smoothly run current PC games at medium or high settings because of its 720p resolution target. (Strangely, maybe even disappointingly, not 1080p.)

Valve has a history of releasing ahead-of-the-curve hardware that doesn’t quite work out. Its 2015 Steam Machine was a prebuilt, Linux-powered gaming computer

that ran Steam and Steam games 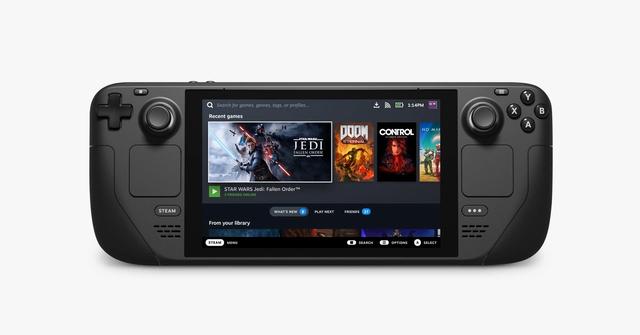 and mobile devices. Valve stopped supporting it in 2018. Valve has also invested heavily in VR headsets, which are well reviewed but

The Steam Deck does seem a little too good to be true, but for now, I will be a willing participant in its vision for portable PC gaming. PC gaming anywhere and everywhere

. So is connecting the anywhere to the everywhere.

📩 The latest on tech, science, and more:

Help! How do I accept that

What you need to

spy on humans above

🎮 WIRED Games: Get the latest

💻 Upgrade your work game with our Gear team’s