Tribes of Midgard's Fenrir is the final boss in Saga mode, and it's essential you're prepared before you take it on. If you've spent much time with the Viking ARPG, you'll know that's easier said than done, especially if you're playing

If you're just beginning your Norse adventure and wondering how to survive long enough to meet Fenrir, our

should get you started. Picking a

that suits your playstyle can give you an edge, too. But if you're ready to jump in against this tough final test, here's what you need to know about Tribes of Midgard Fenrir, and how to beat it to complete Saga mode.

Tribes of Midgard Fenrir: How to find the Saga boss

You'll need to do a lot of preparation before you can even think about taking on Fenrir. This includes protecting the Seed of Yggdrasil in your base while also gathering and crafting the materials you'll need to reach Fenrir's lair.

Explore the map to locate the broken bridge

which leads to the Glacier Peaks. You'll need a load of materials to repair the bridge, but finding the lair early in a run means you won't have to hunt for it later. You can also activate fast travel points to make getting around much more manageable.

To repair the bridge, you'll need a lot of 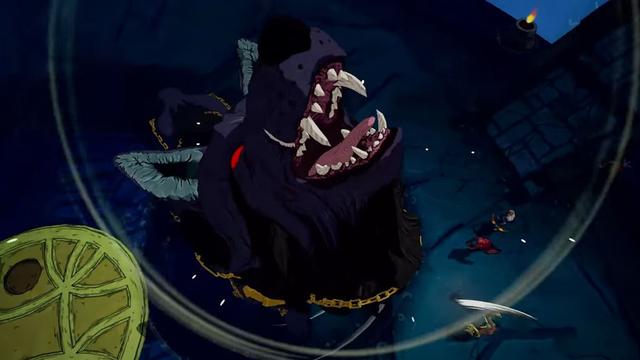 , the latter of which drops from the invading Jotnar. Once you've fixed the bridge, you should find Fenrir's lair close by. You will be exposed to Cold while in the Glacial Peaks, though, so keep an eye on your temperature and activate any fast travel points you find.

Hang on to any

you collect—these come in four types. You'll need these to confront Fenrir.

How to beat Fenrir in Tribes of Midgard

Once you've used the Fragments on the boulder inside the lair, the boss will appear. Unfortunately, Tribes of Midgard Fenrir doesn't seem to have a weakness to take advantage of, so you'll have to rely on your Viking strength for this battle. At least you won't have to deal with the temperature debuff.

Most of Fenrir's abilities are telegraphed, but you'll need to be alert to take it down. Take a look at the video above for a visual guide on these. Bows or other ranged attacks can be good to keep some distance, but as the boss is relatively slow, you'll start to learn its tells and jump in to get a few hits in between its bigger abilities.

Playing co-op with a group of friends can help take some of the pressure off, though the boss' health scales up with more than one player. Also, bear in mind that the Seed of Yggdrasil is still vulnerable to attack while you're away from your base, so you'll need to head back to your base to defend it at night.

When not writing guides, Sarah spends most of her time immersed in MMOs. One day she hopes to play through the ending of Final Fantasy X without breaking down into a sobbing emotional wreck. She probably has more wolves than you in Valheim.