Current media reports claim that the iPhone will surprise the public at the press conference this fall. Accumulation of the iterative process of product update due to the environmental impact of the previous epidemic. This will make this autumn new product launch conference or the one that brings the newest products in its history. It is reported that at the autumn conference, everyone will see not only mobile phones, but also laptops, MacBook Pro and iPads that have not been updated for almost a year. In addition, there is an iPad mini that hasn't been iterated for two years. There is even the watch series 7 of the wearable department. These new products cover almost all of Apple's core product areas. Among them, many people's eyes are also focused on the iPad mini, which is a typical representative of the tiny tablet. The emergence of tiny tablet has greatly improved the same tablet experience. It quickly occupied the electronic equipment market and became a favorite electronic product tool for many people.

As the latest version of the tiny tablet of the iPhone, the iPad mini5 still has a certain market share. The market audience's evaluation is also polarized. In the eyes of some people, the 7.9-inch tiny tablet is very impractical. Playing games or a large-screen tablet experience better. But in the eyes of other people, the light and small size of the iPad mini5 is the most ideal tablet condition. Only small size can fully experience the mobile ecology of iOS. Among all the current iPads, only the mini can be easily held in the hand. This usage scenario is broader than the bulky 10.2-inch iPad. In summary, although the small screen is the only disadvantage of the iPad mini5, it is also its greatest advantage. For those consumers who have no learning needs, iPad mini5 is still a very good choice. 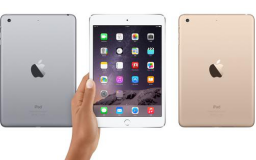 2. Reasons for choosing a tiny tablet

a. iPad is not suitable for study and work

In fact, the current iPad is not a necessary product. Although many people will deceive themselves that they buy iPads for learning and mobile office. But in fact, a laptop is the best choice for study or mobile office. Mouse and keyboard operation is essential for efficient work. The iPad can only be a temporary emergency tool at best. Although the appearance of the Apple pencil has improved the practicality of the iPad, it has only a significant utilization rate for the student party. The iPad is just an entertainment tool for most people.

The iPad mini5 has only a 7.9-inch screen. However, due to the different screen ratios, the actual appearance of the mini screen is nearly double that of the iPhone 12! A tiny tablet like the iPad mini5 is very friendly for playing games. Because it weighs only 308 grams, and the line of sight distance is the same as when playing a mobile phone. Therefore, the effective area of the screen is nearly doubled. The intuitive experience that this brings is that the look and feel is more comfortable. The tiny tablet is very comfortable for reading books or comics, and for watching videos. Both the feel and the look and feel have reached an excellent balance. But if you are typing or writing notes, a tiny tablet such as the iPad mini5 is indeed a bit small. Therefore, the mini tablet is more suitable for entertainment.

c. The A12 performance of the tiny tablet is still outdated

As far as the current market is concerned, although the iPad mini5 uses a processor from 3 years ago, it is still an excellent game console. Compared with the A12 processor Kasuo, the A14 processor has increased its overall performance by only 40%. In other words, the difference between the two is not very big.

According to the actual measurement situation of the audience, the iPad mini5 will only be slightly strenuous when encountering monster-level mobile games such as Yuanshen. In the face of mainstream mobile games such as tribal conflict, Honor of Kings or PlayerUnknown's Battlegrounds, the A12 processor can easily cope with it. The A12 processor is like the 1050Ti in the graphics card, it has the most basic gaming performance. Although it's not top-notch, it's not outdated either. On the whole, it is at least comparable to the Snapdragon 870. In short, as long as the best gaming experience is not pursued, the iPad mini5 can last for at least 5 years. This also indirectly proves the market necessity of brain tiny tablets. I believe that in the future electronic market, the tiny tablet will continue to develop.