But not everyone was so optimistic about the partnership. Within minutes of the announcement, the Oculus website was filled with angry comments. (The top one read simply: "DO NOT WANT".) Backers threatened to cancel their pre-orders, to never buy the Rift, to throw their purchasing power behind Sony's Project Morpheus. Some of this was gamer snobbery, rooted in the assumption that Facebook would dumb down the Oculus experience, loading it with targeted ads and 360° 3D versions of FarmVille. Some of it was fear that their gaming device would wither away in the Facebook catacombs, forgotten by a young billionaire mogul with buyer's remorse. And some of it was the fury of backers spurned, people who had ponied up to support the original Kickstarter campaign, only to see their investments made irrelevant by a deep-pocketed corporation.

But the Oculus team argues that, far from threatening the device's immediate future, Facebook is helping to secure it. "Every VR product has been a failure," Luckey says. "Nobody lending money for manufacturing looks at Oculus and says 'I can loan you $250 million!' Because they know the safe bet is we're going to fail, go bankrupt and take hundreds of millions of dollars with us." Now Oculus doesn't have to worry about getting loans at all. And Facebook's backing has helped the company attract a raft of people from top game studios. Within a week of the acquisition announcement, Michael Abrash, the Valve engineer who spearheaded that company's virtual-reality research, became Oculus's chief scientist -- joining colleague Atman Binstock, who'd gone to Oculus earlier in March. Along with a third former Valve engineer, Aaron Nicholls, they are now working at an Oculus research and development lab in the Seattle area. 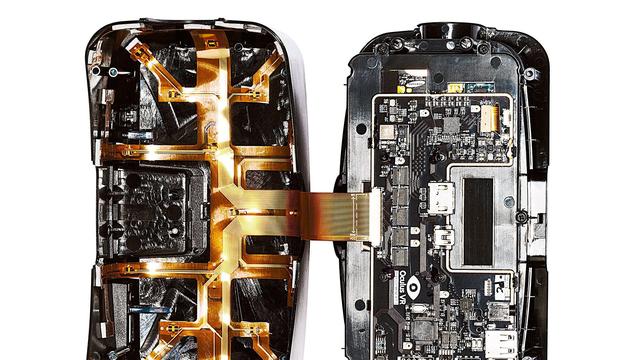 Facebook's money also means that Oculus doesn't need to worry about turning an immediate profit -- and that will come in handy as it builds its first consumer product. "Let's say we're trying to pack in everything we can for $300," Mitchell says. If the device needs to be profitable, then the company couldn't spend much more than $100 on the hardware itself. But now that it doesn't need to preserve its profit margin, Mitchell says, "you can take all of that margin money, apply it to components and still keep the price exactly the same." In fact, according to Luckey, the consumer version will be "higher quality in every aspect" than the prototype that Valve showed Iribe last year. While Oculus's internal units have used twin AMOLED 1080p displays from Samsung Galaxy S4s, the company no longer has to depend on the mobile-phone ecosystem; it now has the money and the backing to ask a manufacturer to create custom displays specifically for VR applications.

Oculus is also working on a second, outward-facing camera that will be part of the headset itself. The Valve prototype used such a camera to read fiducial markers on the walls for tracking, but Oculus seems to intend it for some very different applications. For one, Carmack says, it can function as a pass-through camera, allowing Rift-wearing users to see what's happening in the real world -- a kind of external heads-up display that would allow you to pick up a drink, for instance. But it has other, much more interesting potential uses. Right now the Rift allows players to look around a virtual world; to move through it, they use an Xbox controller. But a front-facing camera might allow the Rift some day to track users' gestures instead -- much like a Kinect, but more powerful. "In the early days of virtual reality, it was all goggles and gloves," Carmack says. "Nobody's talking about the gloves now -- it's going to be done with optical tracking. You want it to feel like a virtuoso with an instrument." Add haptic feedback, which the company is also developing, and you've taken a giant step toward achieving true presence. Players will be able to engage with virtual worlds -- and have those worlds engage back -- unencumbered.