Competition to create the best graphics cards for video editing has been hotting up since the demand for video content is higher than ever before. With so many eyes hungry for new content on websites and social media, video editors need the fastest tools to meet demand.

One of the most important components in any video editing setup is the graphics card (GPU). This performs a range of tasks, from encoding and decoding video to applying GPU-enabled effects and displaying the video on the screen. Having a computer with one of the best graphics cards is essential for any video editor working (see our

if you need to upgrade there).

GPUs are going through a generational change, with the new generation offering more power for a lot less money than their preceded them.

The critical thing to bear in mind is to choose a GPU that is best suited for the video editing software and system that is being used. For example, Blackmagic Design's DaVinci Resolve is an excellent example of a NLE (non-linear editing system) that can work with a wide variety of GPUs. If the computer has multiple GPUs installed, Resolve offers the ability to choose which GPU drives the screen and which is used purely for editing compute tasks.

For Final Cut Pro users on the Mac, the only video card upgrade path is with AMD graphics cards. The recent announcement of Macs running the M1 chip with integrated GPU's could be game-changing for Mac video workflows. (If you need software advice, see our

It is early days for this new generation of video editing hardware. Still, this list details some of the best options for video editors today. For more general graphics cards, see our

Let's just cut to the chase, the new Nvidia RTX 3090 is an absolute beast of a next-generation GPU. With 24GB of video RAM, the ability to output to 8K monitors using the latest HDMI 2.1 spec, the RTX 3090 card will handle pretty much everything a video editor can throw at it. Especially in Adobe Premiere Pro on Windows which tends to work better with Nvidia GPUs than AMD on the PC in most cases. Also, the RTX 3090 will work well for a wide variety of other creative disciplines from 3D to realtime content creation.

The catch, well surprisingly, there are quite a few. The main one being – can a PC handle all that power? The RTX 3090 is an electricity eating monster with a TDP of 350W, so make sure the PC into which this beast will be installed has a power unit capable of handling the RTX 3090. The RTX 3090 is also physically big and may get cramped in smaller PC cases.

Then there's the availability issue for all of Nvidia's Ampere cards. This is why we are listing the Founders edition as our current pick as it is currently the cheapest variant of the RTX 3090 card to buy.

AMD's Pro powerhouse is great value compared to the competition

AMD's Radeon Pro Cards are a lot cheaper than their Nvidia Equivalents, but that doesn't mean that they are not equal to them for a lot of tasks. The

is the latest from AMD's Radeon Pro graphics team. If you do not need CUDA applications, the Radeon Pro VII is probably the best all-round Pro card on the market. It's especially good for video content creators, as it has the capability to drive 6 displays at 4K, 3 screens at 5k and even (if you can find one) an 8K display.

Video RAM could be limiting

Still tricky to get hold of

The RTX 3080 is the Goldilocks of the new Nvidia RTX 30 family, as for many video editors it offers a winning combination of power and value for money. Offering more speed in Adobe Premiere Pro in specific tasks than the previous flagship Nvidia RTX Titan for almost a third of the price, the RTX 3080 also offers Adobe Premiere figures that keep pace with the much more expensive RTX 3090 for a range of video tasks.

The catch with the RTX 3080 is that the 10GB of video RAM does seem miserly especially as 4K and larger video workflows become the norm.

All of the RTX cards offer brilliant software tools for streamers that are part of the NVIDIA Broadcast app, which make the most of the AI tools in this new generation of cards.

Again, as with the RTX 3090 we are linking to the Founders Edition of the RTX 3080 as it offers an innovative new fan design, looks classy and is the cheapest option.

Nearly as powerful as the previous generation

The RTX 3080 offers more for not much more money

Nvidia cannot get enough to market

As mentioned with the other RTX 30 cards, the level of computing power that this Ampere card offers compared to the previous RTX generation is mind-blowing. The

is not quite as fast as the previous generation's top of the line RTX Titan and RTX 2080ti. Considering both of those cards retailed for nearly three times as much, the value for money that the RTX 3070 offers is staggering.

Again, as with the RTX 3080, the catch is the lower amount of video RAM, which could get in the way when working with multiple video streams and GPU effects.

The RTX 3070 makes a lot of sense if more than one is used in a multi GPU setup. Video editing software such as Blackmagic Design's Resolve could use one of the RTX 3070s for compute and the other for display. This setup can offer a lot of flexibility for artists for a lot less than the price and power requirements of an RTX Geforce 3090.

For Adobe Premiere video editors and content creators on a budget, the RTX 3070 offers outstanding value for money, if you can find one.

For users who want CUDA acceleration and peace of mind

For many video editors, having a card that just works with their chosen video editing software and will run quietly with good support and a solid warranty is worth the extra price premium.

However, the new RTX 30 series of cards, with their power to cost ratio is really making it harder to justify Professional Quadro cards for all but the most niche of video uses.

For those that still insist on a Quadro for their video editing, due to the more stable driver set, the 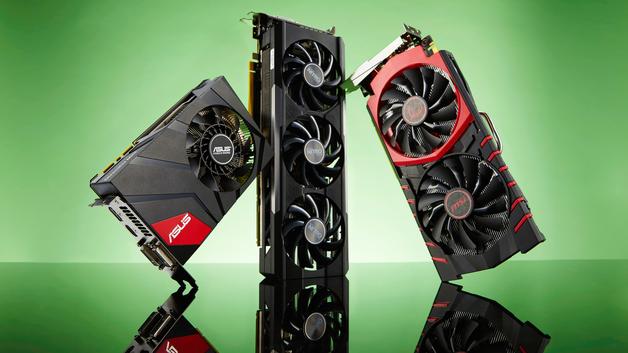 would be our pick. The RTX 5000 offers 16GB of fast Video RAM which will provide a wide range of video workflows. With benchmarks in Adobe Premiere Pro comparable to an RTX Titan or RTX Geforce 2080ti, the RTX 5000 more than packs a punch. And with its price falling it is a bargain in the Nvidia workstation card space.

AMD's Next generation top of the line GPU

Can work with Intel Macs with eGPU

Does not work with CUDA optimisation

is the flagship card for the new Ray-Tracing generation of cards. For pure power, AMD has closed in on – and in some cases exceeded – Nvidia in its primary goal of gaming benchmarks. Where that leaves the RX cards for video editors is still up for debate.

However, AMD is bringing some exciting new technologies to market, especially when the RX series of cards are paired with the latest AMD Ryzen CPU's. Namely 'Smart Access Memory', which allows the CPU and GPU to maximise the bandwidth between them, resulting in a potentially substantial performance gain.

Also, AMD cards can work with Intel Macs via an external GPU box, which makes an AMD card a potentially great investment for multi-OS workplaces. As the flagship card for a reasonable price, the AMD RX6900XT could be a future-proofing bargain.

Not as good for video editors as for gamers

is the sweet spot in the new AMD generation, not as expensive and power-sucking as its bigger sibling the RX6900XT. The RX 6800XT does retain the same large amount of 16GB of Video RAM, which is worth noting is 6GB more than Nvidia's equivalent RTX 3080. Compared with the lower tier AMD RX6800, it offers more power for not that much more money and would definitely be our pick of the two cheaper cards.

As we mentioned previously, some editing applications like Blackmagic Design Davinci Resolve love multi-GPU setups. The prospect of workstations packing two RX6800XTs alongside a next-generation Ryzen CPU would be our sweet spot for a Blackmagic Resolve workstation that could last for years.

A good alternative for AMD and Mac users on a budget

If graphics cards were rated by their design, we would put the

at the top of the list. While AMD is keeping up with Nvidia with its latest RX6000 series. The previous generation of cards where no slouches. Boasting many of the same technologies that are in the newer cards such as PCIE Gen 4 support and GDDR 6 memory make the RX 5700XT a festive bargain for video editors on a budget. This is also an excellent option for Mac users who want a cheap and quick way to boost the performance of their laptop via an eGPU enclosure.

Probably the best value Pro card on the market

is an excellent card for a multi-use system. The Radeon Pro drivers ensure that Pro video applications run like butter.

Like all other AMD cards, the WX8200 is just as happy working with a Mac or PC. Also, AMD cards are more than comfortable working with an Nvidia card in the same PC box. This means an editor could set up a system which benefits from the WX8200 to drive the UI that offer's pro-level enhancements to a range of applications. For those applications that require CUDA a GeForce card could be installed for compute tasks only. All of this for less than the cost of a more expensive Pro card from Nvidia or AMD. This flexibility makes the WX8200 an excellent investment for any video professional.

A game-changer from Apple

Nearly as fast as a Mac Pro

Could be obsolete in a year

Welcome to what could be the most significant single change in video creation in over a decade. With the advent of the new M1 ARM-powered chips, Apple has rewritten what a GPU can do. This is because the new Apple architecture combines all the elements of a computer into a single chip which has taken the computer industry by storm. Easily outperforming more powerful Macs (and PCs) in a variety of video workflows, offering at least 2x performance for GPU related tasks, while using a fraction of the power.

When embedded in a

, for Final Cut Pro and DaVinci Resolve users (both applications have been optimised for the M1), the new M1 powered Mac mini could be a better investment than a new discrete GPU or external GPU setup for editors for a similar price. The Mac Mini is an excellent GPU for video users that just happens to come with a Mac preinstalled.

A word of caution as the Mac Mini M1 is a first-generation product, features such as eGPU support and RAM expandability are missing. Also, this is the beginning of a new series of Mac's from Apple, so it may be wise to hold off to see what comes in 2021. See our full

Mike Griggs is a Digital Content Creator with over two decades of experience creating Mograph, VFX and CGI for a wide range of clients

The best MacBook webcam in 2021

Download Adobe Substance: how to get it free or buy the subscription

The best iPad cases in August 2021: protect your tablet