By: Matt Callaway, Texas A&M Athletics CommunicationsBRYAN-COLLEGE STATION, Texas – The No. 19 Texas A&M men's tennis team hosts No. 14 Arizona, No. 23 UCLA and Texas Tech at the annual ITA Kick-Off Weekend at the George P. Mitchell Tennis Center this weekend. Matches begin at 2 p.m. (CT) on Saturday with the winner of the A&M vs UCLA match and Arizona vs Texas Tech showdown facing off on Sunday for a place in the ITA Team National Indoor Championships in Seattle in February. "This weekend is a great opportunity for our team to show what we are made of," head coach Steve Denton said. "We had a solid week of practice and know the team is really excited about competing at home. We will need to come out with a lot of energy. Our region has a tremendous amount of parity and will come down to who executes the best on the big points. All four of these teams are capable of advancing to Seattle. We should have a great weekend of tennis at the Mitchell Tennis Center." The Aggies opened the dual season last week with an impressive 5-2 victory at Arizona State. Buoyed by strong performances from a host of newcomers the Aggies earned the doubles point and singles wins by Matthis Ross, Giulio Perego, Guido Marson and No. 80 Luke Casper. In addition to No. 80 Casper, Aggies in the latest ITA Singles Rankings include No. 74 Raphael Perot and No. 115 Schachter. Schachter also earned the No. 35 doubles ranking alongside Austin Abbrat. Ranked singles players in College Station this weekend include Arizona's No. 53 Herman Hoeyeraal and UCLA's No. 41 Alexander Hoogmartens and No. 96 Stefan Leustian. The Bruins enter the weekend with a 1-0 record after defeating Saint Mary's 7-0 on Tuesday. Arizona carries a 4-1 record into Saturday's matches, earning a 4-3 win over then-No. 3 Texas and their only setback coming at the hands of Pepperdine last Sunday in Malibu. Texas Tech travels to the Brazos Velley sporting a 3-0 mark, most recently claiming a 4-3 triumph over SMU last weekend in Dallas. The Aggies will take on Texas A&M-Corpus Christi on Sunday at 6 p.m. following the conclusion of ITA Kick-Off Weekend. After taking on the Islanders, A&M will have a brief break in play before traveling to Tampa, Fla. to challenge USF on Feb. 12 at 12:30 p.m. FOLLOW THE AGGIESVisit 12thMan.com for more information on Texas A&M men's tennis. Aggie fans can also keep up to date with the A&M men's tennis team on Facebook or on Twitter by following @AggieMTEN. Print Friendly Version 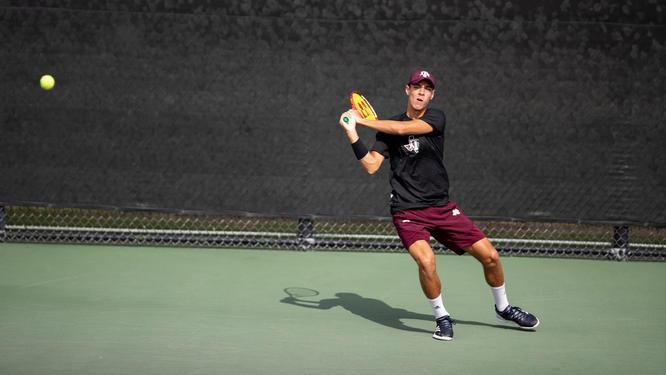 Tags： how to stay up to date with technology news,