Terminator might be a story about humanity's downfall at the hands of its own creation, but it tells on the back of an epic action movie premise.

is hard work, and those beggars don't go down easily, which is why there's so much serious firepower strewn about!

Today we're breaking down the 10 deadliest weapons ever featured in the Terminator film franchise. Think they measure up? Read on and find out!

Sometimes, all one needs is a reliable and trustworthy assault rifle. While the other weapons on this list are primarily specialized in nature, the Colt Commando was easily one of the most versatile. Variations of the weapon are sprinkled throughout

with Sarah's silenced 629 version being the most popular.

The Commando comes in a dizzying array of options including the AR-15 Sporter I and II, the XM177E2 and the GAU 5/A. It is still widely regarded as one of the most prolific and popular M16 variants in history.

By the mid-90s, RPG weapons had become instantly recognizable not just in the weapons world, but mainstream culture as well. Cheap, effective and easy to handle, the RPG is both lauded and mired in controversy for its use by radical terrorist groups around the world.

The third Terminator utilizes the Type 69 variant used to save Kate Brewster from the T-X. The scene is notorious for being extremely unrealistic, as the back-blast from the RPG would most likely have killed Brewster from shrapnel erupting from the passenger side door.

might have been a bomb, but at least it featured some nifty guns! The most memorable of the film was unveiled when Sarah Connor makes her first appearance to combat the Rev9 on the highway.

The Fostech Origin-12 was powerful enough to punch holes straight through the Rev9, making it one of the grittier guns in the series. While technically a shotgun firing 12 gauge rounds, it was originally classified as a non-NFA firearm with no true classification. In 2019, it was officially deemed a shotgun by the ATF.

Sometimes you don't need the latest and greatest to get the job done! In

the T-850 goes back to basics with a traditional Browning M1919A4 to lay waste a bunch of cop cars, without killing anyone in the process.

Terminator: 10 Things That Made The First Two Great (That The Other Sequels Have Missed)

Developed in the 1930s, the M1919A4 saw plenty of action in World War II, the Korean War, Vietnam and the Syrian Civil War, to name a few. Its destructive power is matched only by its reliability.

films feature a staggering array of destructive weaponry, they're old news by the time Judgment Day touches down. In the future, weapons have ditched gunpowder and bullets in favor of plasma technology, and the Endo Battle Rifle is the signature model.

Wielded in combat by T-800 Endoskeletons against the human resistance, these high-powered weapons are far deadlier than conventional weaponry, which is why Connor acquired his own to turn them against SkyNET and its Terminator force.

Backup weapons were important to the first Terminator, which is why he carried the concealable, highly destructive Uzi 9mm in his jacket. After losing his Longslide when Kyle Reese attacks him with a shotgun barrage, he pulls out the Uzi to lay waste to Tech Noir patrons, and keep Reese at bay.

The Uzi 9mm sold to the Terminator in the gun store scene is the short barrel version, which would have been illegal to sell in 1984. Civilian models were sold with a 16" barrel, as per the law.

The first Terminator knew its weapons well, and picked the right tools for the job. One of the first was the iconic AMT Hardballer 45. Longslide (wit' Laza' sighting) used to execute several victims before training itself on Sarah Connor's forehead.

Laser sights were practically unheard of in 1984, and required power via a 10,000 volt activation mechanism, plus a further 1,000 volts to maintain the laser. Schwarzenegger activated the laser sight via a cabling system ran up the arm of his jacket - a far cry from modern laser technology. 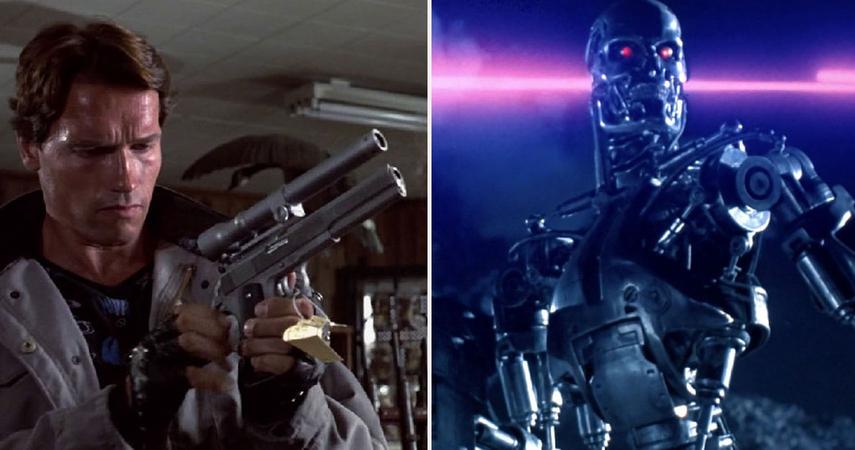 The shotgun is a staple

weapon designed to knock down infiltrator units with the sheer force of an up-close blast. It can't kill a Terminator, but it can buy some valuable time to plan an escape.

The films feature a wide assortment of shotguns including the Remington 870, the SPAS-12, and the most popular of them all - the Winchester 1887, wielded masterfully by Arnold Schwarzenegger's benevolent T-800 in

Who could forget that memorable "Ploop!" sound whenever the T-800 flicked open the M79 Grenade Launcher and fed another Easter Egg down the chamber? It's one of

most iconic guns, and that's putting it mildly!

The M79 would serve the second Terminator well throughout the assault on CyberDyne, the harassment of the LAPD forces, and of course, in the final battle against the T-1000. Without this little soldier, things might have turned out quite different for humanity!

weapon is as iconic as the wickedly powerful M134 Minigun. Although Schwarzenegger's other action vehicle

to the punch by featuring it first, the Minigun would gain just as much fan love for a scene involving a massive shootout with police.

Minigun differed from its

variant by featuring a Chainsaw Grip in comparison to an M60 foregrip. Ironically, the Chainsaw Grip would become the most recognizable Minigun style to date, appearing in subsequent movies and video games which feature the weapon.

Midsommar & 6 Other Long Horror Movies That Are Worth It

Derek started writing about video games at age 14 and went on to write for GamePro Magazine and several other prominent outlets. He now brings his veteran pop culture XP to ScreenRant.