Five members of Tekashi69’s private security team—including a former NYPD officer—have been indicted after they went on a 20-block car chase in Harlem in pursuit of a fan who tried to capture video of the rapper on his cellphone, according to the Manhattan District Attorney’s Office.

The New York Supreme Court has charged the defendants with robbery in the first and second degrees, as well as criminal impersonation in the first degree. A

states that the security crew chased a 34-year-old man down in three SUVs equipped with flashing lights and sirens. 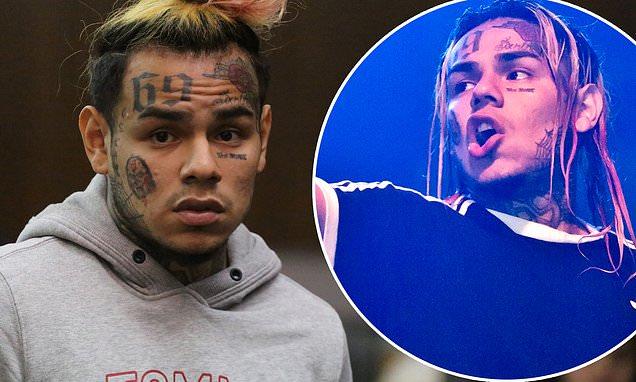 Among the defendants is 44-year-old Daniel Laperuta, a retired NYPD detective who allegedly impeded the victim’s efforts to get help. When the victim attempted to flag down a police car, Laperuta flashed his NYPD Member of Service card and told the officers that the victim had attacked the defendants with a firearm before the fracas began, the release states.

Laperuta then allegedly rejoined the chase—which ended when the SUVs boxed the victim’s car in, forcing him to pull over before one of the security guards allegedly opened the car door, unbuckled the victim’s seatbelt, and pulled on his arm, knocking the phone out of the victim’s reach while another man stomped on it. The group fled, the release states, when an unmarked police car approached with flashing lights.

Laperuta allegedly showed up at a police station to repeat his claim that the victim had threatened the defendants with a firearm but withdrew the complaint after skepticism from a lieutenant. In addition to the charges facing the rest of the group, he was also charged with falsely reporting an incident.

In a statement, Vance wrote, “A celebrity entourage is not a police department, and Manhattan is not the Wild West. As alleged, these highly-compensated vigilantes caravanned through the streets of Harlem with sirens flashing in order to track a man down and steal and break his phone... False reports—especially about firearms—can carry devastating consequences and fortunately, no one was injured or killed in the actual police response.”

Tekashi69 was born in Brooklyn, with the legal name Daniel Hernandez. In 2019, Judge Paul Engelmayer sentenced the rapper to 24 months in prison and five years of supervised release. Tekashi had been arrested on racketeering charges when he chose to cooperate with the feds and testify about his relationship with the Nine Trey Gangsta Bloods, a New York street gang. He said that he was a member for less than a year, and gave the gang money in exchange for protection and street credibility to bolster his public image.

“There is no excuse, no justification, and no apology is good enough in this world to explain my crimes,” the rapper wrote in a letter to the judge. “I know my life will never be the same but hopefully this change will be for the better because beyond all of this, I still consider myself a role model to millions of people as an artist, a celebrity, and as a human being.”