In comic books, telepathy is commonplace. In superhero TV shows and movies, heroes are more likely to whip out a phone. And it's often not a high-tech, imaginary phone, but one that really exists.

The reason, of course: product placement. Partnerships between filmmakers and phone manufacturers have become so common in the industry that it's amazing when a movie isn't used to sell a phone—or when the notion is subverted, like when

turned a phone that flopped into an emblem of evil. That would never happen with an iPhone, because

Today is National Superhero Day, so we're listening in on how superheroes make their calls. And Saturday (May 1) is

, when you should have your local comics shop on speed dial. Small businesses have been hit especially hard by the pandemic, so when you stop by for the best free comics pickings, don't forget to buy something too.

Here are some of the most prominent phones that have helped superheroes call for help—and order the occasional pizza—over the past few decades of TV and movies.

Alternate identity? Check. Distinctive garb? Check. Powers beyond those of normal humans? Check. Saving the world? Check. The Matrix doesn't come from a comic book, but Neo is still a superhero in the classic mold.

is noteworthy for its very distinctive smartphone: the Nokia 8110, a spring-loaded GSM slider. According to a

, this wasn't a paid product placement; the production designers picked the 8110 because it was popular and looked the part.

In the second movie, Neo and his crew upgrade their phones to a clunky new model, and Samsung designed the SPH-N270 to closely resemble it. The phone is (re)loaded with

-related gimmicks such as a black-and-green color scheme, and was only produced in a

intended for die-hard fans. Since it was designed for Sprint's

network of 2003, today this supposedly futuristic phone is about as useful as a plastic film prop.

This one cracks me up, because the VX9400 is such a goofball phone. Tony Stark makes video calls on the

, which was better known (to the extent it was known at all) as one of Verizon's first broadcast TV phones, using the Qualcomm MediaFLO service.

I'm completely okay with this choice as a character note. It's a high-end model from a respectable maker, and Tony wasn't yet inventing world-destroying artificial intelligences or transparent smartphones.

Of all the phones that Disney has forced Tony to carry, this is the one that makes the most sense. By this point in his career, Tony Stark needs an impossibly ultra-high-tech device, so the filmmakers didn't even try to design a complex physical object. Instead, they gave him an LG-branded piece of glass and projected an interface onto it.

The slab may have been inspired by the

, a phone with a completely transparent keypad that rolled out in mid-2009.

many great pictures of the "Stark Phone"

and a Samsung tablet, an entire Samsung store being trashed during the fight between Iron Man and the Hulk, and the real-world launch of

version of the S6 Edge.

And Tony gets another transparent holographic phone—it's just that this one is made by Samsung rather than LG.

DC and its owners had a long relationship with Nokia and Microsoft, starting with the Nokia XpressMusic 5800 being associated with 2008's 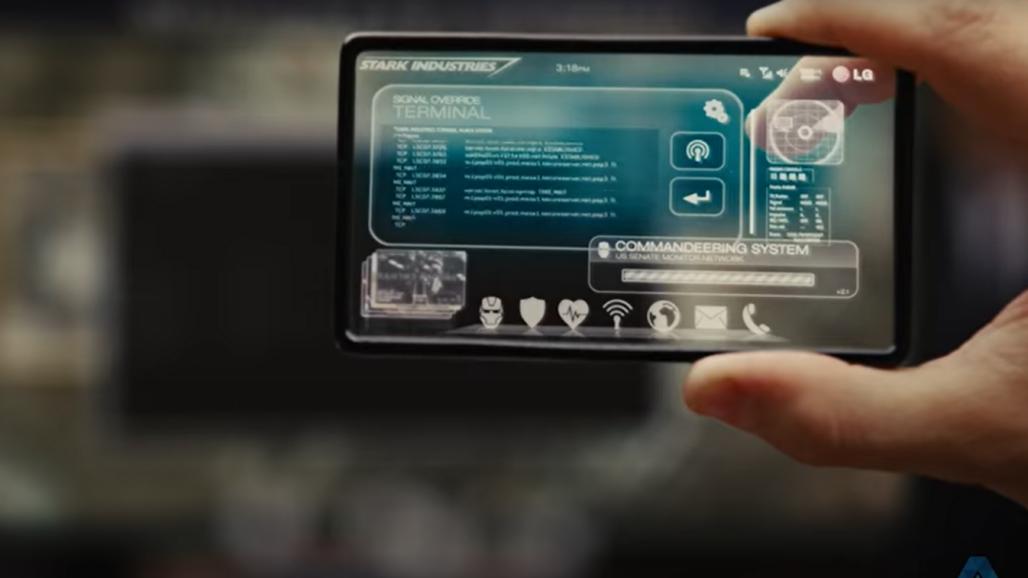 . If these were comics, I'd say that Clark got tech advice from his friend Bruce. But since this is the movieverse, perhaps the two scenery-chewing, glass-shattering adversaries were united by a common enemy: Windows.

, in which billionaire superheroes were forced to use the Vivo V3 Max, a

that never even became available in the US. This was pure grift, and at the time several people (including me) said it was very untrue to the characters. Cap wouldn't touch a foreign phone—he'd reluctantly get a flip phone while refusing to give up his landline—and Tony Stark would never, ever be caught dead with a phone that cost less than $1,000.

The Spider-Man and Venom movies are made by Sony, and if there's a chance for a thing in a Sony movie to be a Sony thing,

it is a Sony thing

. Therefore, Spider-Man uses Xperia phones. It's like how everyone in the world of

is listening to Queen all the time. Just roll with it.

There are (perhaps unreliable) online rumors that Spidey used a

in at least one movie, and

appear to show characters using an

and some other Sony models. There's nothing wrong with this as a narrative choice. Xperia phones are nice, and maybe the Spider-Verse is just a world where Sony turned out to be more successful than Samsung. I can imagine that world.

Blink and you'll miss it: Clint Barton uses a

toward the end of

to take a very important phone call. We named the Pixel 3 one of the best products of 2018, so I can't quibble with Hawkeye's choice.

I love this because it's opposite of product placement. The Red Hydrogen One was a weird-looking, disastrously failed phone from the RED movie-camera company. It

resurfaced as the Corvus,

an evil mind-controlling phone in Marvel's

TV series. Some production designer clearly just saw the device and thought it looked cool. At heart, that's what superhero movies are all about.

Which phones would you put in the hands of your favorite superheroes? Are you building

around the phones characters use?