Is there some kind of aquatic life underneath the “chaos terrain” of one of the moons of Jupiter?

“Europa Clipper” is the deep space mission that will surely define the 2030s. It’s NASA’s attempt to uncover the truth about Europa, which looks like a “veiny eyeball” thanks to fractures in its icy surface.

Europe is a high-priority target of investigation for space agencies.

A moon of Jupiter thought to have a liquid ocean underneath its icy “veiny eyeball” crust, Europa has three ingredients for life as we now it—water, chemistry and energy.

It will depart on October 10, 2024 from Florida, and it will now do so atop a SpaceX Falcon Heavy rocket, NASA has announced, in a contract worth $178 million.

After flybys of Mars and Earth it will arrive at Europa in April 2030.

Center on April 11, 2019 in Titusville, Florida. The rocket is carrying a communications satellite built by Lockheed Martin into orbit. (Photo by Joe Raedle/Getty Images)

‘Joe Rogan Is Getting This Completely Wrong,’ Says The Scientist Who Conducted The Vaccine Study

Inside NASA’s Jaw-Dropping Plans To Fly To Titan, Burn Its Lakes And Bring Home The ‘Origin Of Life’

What is Falcon Heavy?

Designed to be able to carry humans into space beyond low Earth orbit, the Falcon Heavy rocket is SpaceX’s triple-core heavy-lift launch vehicle. It’s only flown three times, most recently in June 2019, but is due to be used for two U.S. military payloads in 2022.

The Europa Clipper mission had initially been set to launch on NASA’s own Space Launch System (SLS) rocket, which are yet to fly, but they’re now being reserved for the space agency’s

upcoming “Artemis” missions to the Moon

What we know about Europa 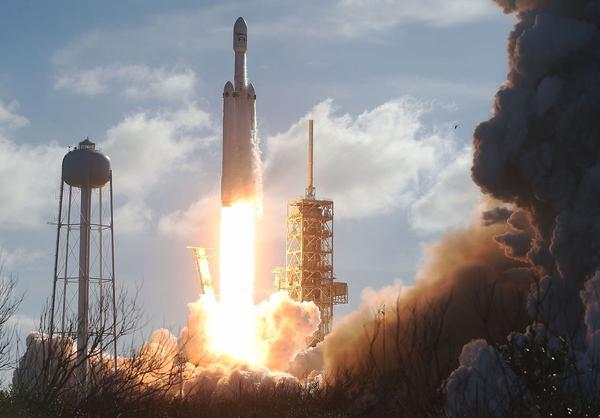 a global ocean of water beneath an 11 mile/18 kilometer thick crust of ice.

It’s thought (and hoped) that this ocean could harbor simple forms of life.

shades of green, blue and white even on its nightside.

What will the Europa Clipper mission do?

The Europa Clipper mission will perform about 45 flybys to survey its icy surface using a suite of advanced science instruments in an effort to:

look for signs of recent or ongoing geological activity.

measure the thickness of the moon’s icy shell.

determine the depth and salinity of Europa’s ocean.

That will help researchers determine whether Europa may, in fact, have conditions suitable for life.

However, there’s also now a chance that it’s

that could be sampled by the Europa Clipper—and perhaps even analysed to detect signs of extraterrestrial life.

This image shows a cutaway view of the possible internal structure of Jupiter's moon Europa. The

interior characteristics are inferred from gravity field and magnetic field measurements by NASA's Galileo spacecraft. Europa has a metallic (iron,nickel) core (shown in gray) surrounded by a rock shell (shown in brown). The rock layer is in turn surrounded by a shell of water in ice or liquid form (shown in blue and white). The surface layer of Europa is shown as white to indicate that it may differ from the underlying layers. Galileo images of Europa suggest that a liquid water ocean might underlie a surface ice layer several miles thick. AFP PHOTO JPL/NASA (Photo by - / JPL/NASA / AFP) (Photo by -/JPL/NASA/AFP via Getty Images)

Europa Clipper isn’t the only mission

Set to launch in 2020, the European Space Agency’s JUpiter ICy moons Explorer (JUICE) will spend three and a half years examining Europa and two of Jupiter’s other large moons, Ganymede and Callisto.

Its cameras and ice-penetrating radar will be used to study the composition of Europa’s icy crust, detecting whether there are reservoirs of water between layers of ice.

How to see Europa with your own eyes

Got a pair of binoculars? Point them at Jupiter any time this month right after dark It’s that really bright “star” rising due east.

Either side of Jupiter, strung out in a line, you’ll see some or all of Jupiter’s four big, bright moons as dots—Europa, Callisto,