Sony’s love affair with Ultrabooks has been a rather steamy one and their latest fling, dubbed the VAIO Pro 13, has been our favourite thus far. However, they’ve never managed to get it right when it comes to hybrids. The VAIO Duo 11 was their last attempt at a premium convertible and while it was good as a tablet, it never quite made the cut as a notebook. Their VAIO Flip series is about to change all that however. This is also the first hybrid of its kind to be available in three screen sizes. Today, we’ll be reviewing the tiniest member in the family, the Fit 13A or SVF13N1ASN if you want to get official.

In our first outing with the hybrid, we quite liked what Sony had developed and after living with it for a week, that notion has only been strengthened. The Fit 13A is handsomely built and will easily survive a few knocks of everyday use. The chassis is built mostly of plastic and is reinforced with aluminium sheets that form visible layers on the notebook. It looks incredibly premium and the same goes for the feel of the device.

You’ll notice the slit on the lid and that’s where Sony has added the second hinge for flipping the screen over. With the release of a small switch on the primary hinge, this otherwise unassuming notebook can flip it’s display over, to become a tablet. There are small magnets that hold the lid in either place so it doesn’t flop about. The mechanism itself feels very sturdy and it doesn’t seem like it’s in any hurry to fall apart. We’ve seen this trick in Dell’s XPS 12 hybrid but Sony's seems a more elegant solution.

Sony has also given a lot of attention to detail, which is very apparent from the rubber gasket around the display to keep dust out or the smooth curved edges around the notebook, which make it easy to carry.

For connectivity, we have two USB 3.0 ports, SD card reader, HDMI and a headphone jack. One of the USB ports also supports ‘Sleep charging’, which allows you to charge USB devices even with the laptop off. The notebook also features NFC and the 13-inch model also comes with an 8MP camera in the back.

One of the best features of Sony’s new Flip series is that all the models come with a Full HD Triluminos display. Colours are nicely saturated and the pixel density is very good thanks to the smaller screen size. This is actually a double-edged sword as the text is a lot smaller, which can be tough to read in some apps. The screen also comes with a scratch resistant coating since you will be using this as a tablet as well.

It's fairly comfortable as a tablet but still quite a handful

The Fit 13A is the only variant in the 13-inch category and is powered by an Intel Core i5-4200U, running at 1.6GHz. There’s also 4GB RAM, onboard graphics and a 128GB SSD. Adding a standard hard drive wasn’t possible since Sony has designed this particular model for maximum portability. The 14 and 15-inch variants come with a 1TB hybrid drive however, so if storage capacity is priority then you’re better off with those. The Fit 13A is very portable at 1.3kg and you won’t really feel it in your backpack. The speaker grills are placed on the side so it’s never covered, no matter how you use it.

The AC adaptor has a USB port for charging other devices, which is quite thoughtful

In tablet mode, the Fit 13A is quite comfortable when used with both hands but it’s not light or small enough for single-handed use. Even after folding it down, the notebook takes the shape of a wedge, which isn’t the most ergonomic shape for a tablet. Once again, the light weight mitigates some of these design hurdles.

The hybrid comes pre-installed with a bunch of apps ranging from Trend Micro Titanium Security, VAIO Care, Norton Online Backup and a bunch of Modern UI apps like ArcSoft Camera, SocialLife, VAIO Clip, VAIO Paper and a trial of Office 365. Sony has also bundled a couple of India-centric apps like BigFlix and Sony Music Jive. The latter lets you play and download unlimited music for 60 days. As an introductory offer, Sony is also throwing in the MDR-XB910A headphones to sweeten the deal.

The 13-inch VAIO Flip happens to have the exact same configuration as Sony’s VAIO Pro 13, which retails for a much lower price. The Core i5 Haswell and SSD storage make a good combo, which is reflected well in the benchmarks below. Windows runs without a hitch and boot up time is pretty quick too. 128GB is a not a lot, and after the OS and all the other software add-ons, you’re left with about 62GB of space.

Scores are pretty decent for a Core i5 system 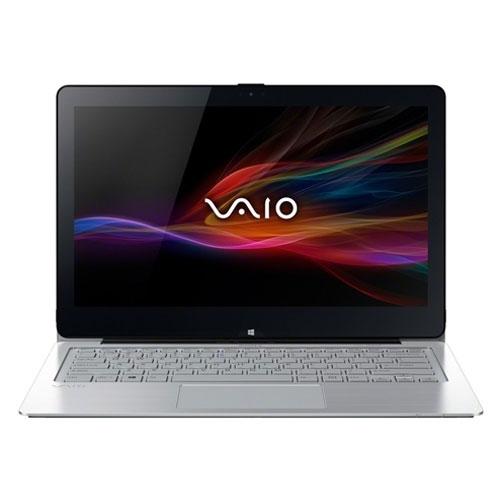 The backlit keyboard automatically engages when the ambient light is low and the same goes for the intensity of the screen backlight. The keys are well spaced out but sadly, there’s barely any travel, which makes them uncomfortable for prolonged usage. There’s ample room for the palm rest area and the trackpad never gets in the way while typing. Speaking of which, the trackpad is quite roomy as well. The venting system is quite effective as the notebook seldom gets hot under regular usage. Under intensive tasks like games for instance, it does get a little noisy as the fan desperately tries to cool the system.

The audio quality through the speakers is quite crisp and clear, but not very loud. Even with all the enhancements from Sony like Clear Audio+, ClearPhase, etc, the max volume level is not enough to properly enjoy, say, an action flick.

The 13-inch is the only one with a rear camera

The VAIO Fit 13A lasted about 2-hours and 25-minutes on Battery Eater Pro, which translates to a real world usage of about 5-hours. While this is not bad, we expected a bit more considering there’s no hard drive in the notebook.

Verdict and Price in India

The Sony VAIO Fit 13A is priced at a steep Rs 99,990, which is a lot of money given the configuration. Hybrids have always commanded a premium over Ultrabooks, simply due to the fact that they can transform into a tablet. While the Fit 13A works very well as notebook and can also pull of some tablet duty, it’s definitely no tablet replacement. However, the really steep price for one novelty feature stops us from recommending it. If you’re looking for an extremely compact Ultrabook, then we

If you really want all the screen-flipping action of 13A, then we recommend getting the Fit 14A. It’s cheaper at Rs 94,000 and you also get a 1TB hybrid drive instead of the SSD.