The Samsung Galaxy Book Go a budget Windows machine riddled with problems. While it may have a nice look to it, everything else is subpar, including the performance. The Galaxy Book Go feels sluggish in the real world, its display is very dim and doesn’t feel well made. It’s only worth a purchase if you’re desperate for Windows at a budget price.

Weighing just 1.38kg, the Galaxy Book Go is a good option for those wanting something portable.

It’s capable of lasting two working days or 13 and a half hours on a single charge.

Plenty of good ports on offer too, including USB-C, Micro-SD and USB-A.

The Samsung Galaxy Book Go looks like a terrific laptop bargain on paper, offering the freedom of Windows in a portable system for as little as £399/$349.

Taking a leaf out of the

‘s book, it looks like Samsung is hoping to disrupt the Chromebook market by offering a budget-friendly alternative to the hordes of ChromeOS portables.

This Samsung Galaxy Book Go review unit I’ve got features a Qualcomm Snapdragon 7c, a similar chip to the one inside the

. Alongside this comes 4GB of DDR4 RAM (can be upgraded with more expensive configuration) and a 128GB SSD, which trumps Acer’s Chromebook by double.

But while the specs look great on the surface, the Samsung Galaxy Book Go is a perfect example of why you shouldn’t judge a book by its cover, with an underwhelming performance and a dim display hurting its chances of becoming one of our

The Samsung Galaxy Book Go sports a nice-looking silver shell that could, from a distance, look like a

, or a significantly more expensive ultrabook. But this illusion soon disappears when you actually start using the laptop.

During testing, I found Samsung’s portable feels much rougher and slightly cheaper compared to the smooth finish of the Spin 513. This is a shame, considering the rest of what’s on offer. It has decently thin bezels and a weight of 1.38kg, which makes it easy to transport around.

The Galaxy Book Go isn’t a convertible machine and it doesn’t have a touchscreen. You can at least push the screen down so it lays entirely flat, offering a tad bit more flexibility than the majority of clamshell designs.

The use of an

CPU, which doesn’t emanate as much heat as the usual suspects from Intel and AMD, also means less cooling is needed. This enables Samsung to keep the laptop’s profile fairly slim.

Despite this, the Go has a reasonable selection of ports. On the left, you’ll find a headphone jack, Micro SD card reader and a Type-C port for charging, while on the right there’s another Type-C, USB-A for connecting hard drives or USB sticks, a security slot, and intriguingly, a SIM card slot. Popping in a SIM card with a data plan will enable you to use an LTE connection for internet browsing away from the Wi-Fi router.

Samsung’s speakers work for basic tasks, but I found they don’t handle the top end very well at high volumes, with some distortion creeping in. The fact they’re mounted straight down with two grilles can mean sound is directly affected by the surface that the laptop is placed upon. Put it on a blanket or duvet, and the audio quickly becomes muffled.

The keyboard is relatively tactile and quiet, but there isn’t a fingerprint reader and it isn’t backlit which could be an issue for students who plan to use it in dim lecture halls.

Samsung has provided a standard-issue 720p webcam for video calls, and this can also work with Windows Hello. There are some function buttons handy in order to increase and decrease screen brightness, to enable users to connect to wireless displays or play and pause video.

A redeeming feature in the design of the Galaxy Book Go is its large trackpad, which provided smooth tracking and rather firm but tactile buttons when pressing down.

Dim display makes it unsuitable for outdoor use

The Galaxy Book Go comes with a 14-inch 1080p panel that offers mediocre performance, at best. A quoted brightness of 150 nits seems very low for a laptop this price, with most laptops aiming for 300 nits at least.

With real world use I found it doesn’t provide half as good of a viewing experience as other similarly priced machines I’ve reviewed.

It does look somewhat sharp, but subdued colours means that it looks an awful lot flatter than other displays at this price. If want a laptop for casual Netflix or Disney Plus binging, then you’re better off looking elsewhere,

The fact it’s an anti-glare panel looks to be the only saving grace, but it’s still going to be difficult viewing the screen when outside on a bright day sue to the low brightness.

The Galaxy Book Go’s main issue is its performance power. With real-world use I found the Qualcomm Snapdragon 7c and on-board Adreno 618 graphics combine to create something chronically slow.

With a clock speed of 2.55 GHz, the 7c is by no means a slow processor for a laptop at this price, and benchmark results were comparable to Acer’s Spin 513, as they both run the same chip.

But in the real world, Acer’s laptop felt noticeably snappier than the Galaxy Book Go. Opening even a handful of Chrome tabs caused a noticeable slowdown, and the less said about multi-tasking, the better.

It seems like the Snapdragon 7c just can’t handle the extra taxation of Windows 10 opposed to the streamlined ChromeOS. If you want a speedy Windows machine, you’re going to have to pay more for the likes of the Surface Laptop Go.

The headline issue though with the Galaxy Book Go is compatibility. Even with this being a Windows machine, I couldn’t get either 3D Mark, or PC Mark 10 to work here, as the fact that this is an Arm-based machine severely inhibits its use of major apps.

Microsoft has announced that it’s looking to improve Windows compatibility for Arm devices in the future, but for now, these limitations arguably defeat the point of opting for Windows over ChromeOS.

The performance isn’t much better from the hard drive either. Sure, the capacity is fine for most at this price, offering 128GB. But the hard drive’s read and writes of 560.93 MB/s and 207.03 MB/s respectively are dreadful. This means saving or loading data on the physical drive will take far longer than more premium Windows laptops on the market.

Lasted 13 hours 27 minutes in our tests

The only real saving grace for the Galaxy Book Go is the fact it offers great battery life – lasting over half a day (13 hours and 27 minutes) in our tests when winding the brightness to fifty percent and utilising video playback.

This puts it ahead of other budget Windows offerings by some margin, beating off Microsoft’s

by nearly four hours, Given the Galaxy Book Go is Arm-based though, the battery life gains may be a little unsurprising.

You can also get a superior battery life with more powerful machines, with the

one of the most impressive alternatives. It will cost you a few hundred quid more, but it’s absolutely worth it in the long-run. 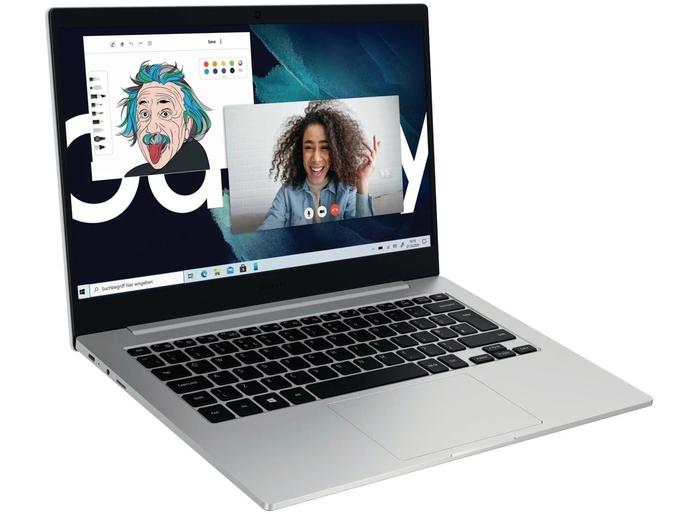 Should you buy it?

You’re desperate for Windows on a budget

:The Galaxy Book Go is really only a worthwhile purchase for those who have their hearts set on using Windows but have a strict limit on what to spend.

You want a laptop with a vague sense of speedy performance

:It’s by no means the quickest nor the most compatible machine, and the Arm-based experience is better on a Chromebook.

The Galaxy Book Go is a hard sell. This budget Windows machine has a good battery life and decent looks, but are there just too many compromises to make it a worthwhile pick over a Chromebook or Surface Laptop Go.

Its scratchy case, terribly slow performance and overall cheap design all combine for a subpar experience. For the price, you’re better off buying Chromebooks that are designed for the budget end of the market.

News, competitions and exclusive offers direct to your inbox.

Every laptop we review goes through a series of uniform checks designed to gauge key things including build quality, performance, screen quality and battery life.

These include formal synthetic benchmarks and scripted tests, plus a series of real world checks, such as how well it runs the most frequently used apps.

We use every device as our main laptop for at least one week.

We judge the performance via both benchmark tests and real-time use.

We test the screen by doing day-to-day tasks such as video streaming.

We test the battery life by reducing the screen brightness to 50% and looping a video.

Does it have a touchscreen?

No, it does not have a toucscreen.

Is this a 2-in-1 convertible laptop?

No, the laptop can not be flipped into tablet mode.

Is it powerful enough for gaming?

No, the Galaxy Book Go is not capable of gaming.

The modern USB connector you’ll find on most Android phones, new laptops, cameras and games consoles. It’s reversible and used for charging along with data-transfer.

A wireless standard that allows you to access the internet without the need of a Wi-Fi router. You generally have to pay a data allowance to make use of LTE.

Tags： what is wifi sense in windows 10,