Over the past few weeks we’ve been checking out previous-gen graphics cards, which could be used as a stop-gap solution to the GPU shortage if you can get them second hand for a good price. It all started with the

8GB which was $300 when we started recommending it earlier in the year, but sadly by the time we got to it, the asking price had skyrocketed to $400-500 a piece. Most recently it seems to be

, so something to watch.

Later we moved on to the much more affordable

6GB which could comfortably be had for

, or $50 above the MSRP set 5 years prior. As ridiculous as that sounds -- and it is -- this is a decent deal and makes the GTX 1060 one of the cheaper and better value graphics cards you can pick up at the moment.

However, if you’re willing to spend what

) on an old GeForce GTX 1070, that means you could get to enjoy all the latest and greatest games using respectable quality settings. The

In a normal market, that’s a laughably bad deal, but today it’s actually decent and it certainly beats buying a RX 580 for the same money, especially given that model was selling brand new for ~$150 about two years ago.

Before we jump into all the blue bar graphs, a few quick notes on the test system.

All testing has been conducted on our

, so the results are going to be entirely GPU limited. Let’s get into it...

It also means that you can get decent experience at 1440p using the low quality settings, which is not amazing, but it’s a nice step up from the Radeon RX 580 and with both priced very competitively right now on the second hand market, it does make the GeForce GPU a much better buy.

Next up we have

For those seeking 200+ fps the medium quality preset at 1080p will work, and for the slightly more casual 120+ gamers you’ll get away with high even at 1440p.

This meant that at 1080p it was possible to achieve over 80 fps even with the high quality preset, while comparable performance was possible at 1440p using low. So excellent performance overall, especially for 1080p gamers.

The GTX 1070 proves once again that it’s still very capable of tackling the latest games, this time pushing well over 60 fps in

We’re looking at around 25-30% more performance in

Shadow of the Tomb Raider

with the GTX 1070 and that allows for well over 60 fps at 1080p using respectable quality settings, such as the medium preset which still looks very good.

Then at 1440p the 1070 dips below 60 fps using the medium preset and therefore those seeking more frames will require the low or lowest preset.

runs exceptionally well on the RX 580 and even the older R9 390. So it comes as little surprise to find the GTX 1070 makes out just fine, delivering over 100 fps even at 1440p using the nightmare settings.

plays well using the Radeon RX 580 and here the GTX 1070 offers 25-30% more performance at well over 60 fps, even at 1440p using the second highest quality preset. That being the case the GTX 1070 is more than capable of delivering an enjoyable gaming experience at either 1080p or 1440p in Death Stranding.

If these results look a bit odd to you it’s because they are. The RX 580 runs into some kind of bug in 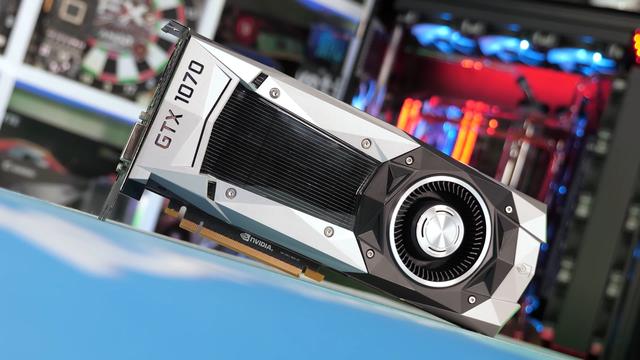 , which is humorous given this is an AMD sponsored title. So the margins to the GTX 1070 are significantly larger than they should be, but that’s not an issue for the GeForce GPU as it was able to deliver more than 60 fps at 1440p using the medium quality preset. The 1070 is a great second hand option for those looking to do some rally driving.

Moving on, we have

and here the GTX 1070 offered ~20-25% more performance and the extra frames came in particularly handy when using the high quality preset which saw the GeForce GPU render 73 fps on average at 1080p and 51 fps at 1440p.

played exceptionally well on the RX 580, but even so the GTX 1070 has a little extra to offer, at least when not CPU limited which is what we see at 1080p using the performance preset, capping us at around 120 fps. Using the maximum quality preset we’re looking at up to a 17% performance improvement with 84 fps on average and then 12% at 1440p, jumping up from 50 to 56 fps.

didn’t play all that well on the RX 580 as the best we could achieve was 55 fps using the low quality preset. The GTX 1070 wasn’t much better, but the 16% boost at 1080p using the low quality preset was welcomed as it did make the game noticeably smoother. Alternatively, you could aim for the same 50-ish frame rate but increase the visuals with the medium preset, so the GTX 1070 is a little more flexible here.

with ease, averaging 87 fps at 1440p using the highest in-game quality preset. For high refresh rate gaming, the medium quality preset will work at 1440p, but if for some reason you require even more performance the Pascal GPU was able to render 165 fps using the very low quality preset.

The second last game tested is

As a result, we’re almost able to achieve a 60 fps average at 1440p using the highest quality visual settings. That meant 66 fps was possible using the high quality preset at 1440p, or 102 fps at 1080p, so exceptional performance in this title from the old Pascal GPU.

, where the GTX 1070 provides over 60 fps at 1440p using the highest quality preset. That being the case, 1080p gamers will be able to receive a high refresh rate experience using even the highest quality settings, so for this title you don’t need anything more than a 1070.

On average, the GeForce GTX 1070 offers ~27% more performance than the Radeon RX 580 at both tested resolutions across a range of quality presets. This means for 1080p gaming the GTX 1070 is still for the most part able to deliver 60 fps or better, with very few exceptions.

Those gaming at 1440p will be able to achieve 60 fps or better for the most part with medium quality settings. For what is now an older mid-range product, that’s a great result.

As expected, the GeForce GTX 1070 is not only faster than the

for gaming, but it’s also very capable in 2021, delivering highly playable performance in almost every game using a respectable level of quality settings. Of course, paying $400 for a

is a hard pill to swallow, but if you’ve been unable to game for the better part of a year now, it might be worth pulling the trigger.

It’s hard to put a dollar figure on something you enjoy and rely on to unwind, and I know from experience that a big part of my week is catching up with friends online and enjoying some gaming.

In a normal market, for $400 you should have access to the

, so in terms of cost per frame it’s actually much worse than the GTX 1070 we just showed. Not to mention, it's simply less attainable overall.

Another alternative is to snap up an RTX 2060 Super for

, but that’s still 50% more expensive than what the GTX 1070 are typically going for and you’ll only be looking at ~25% more performance. In other words, for desperate gamers looking at the second hand market, for a good level of performance the GTX 1070 does look like a decent deal right now.