One look at Axiotron's slate Modbook tablet and it's clear the company has given Apple's 13-inch entry-level laptop the full Steve Austin treatment. Well, minus the 20:1 bionic eye with infrared capabilities. Nevertheless, the end result is a better, (slightly) faster, and, yes, even stronger Mac tablet. Sure, it's the

Mac tablet for now, but this baby is certain to give anyone who dabbles in the dark graphical arts exquisitely rendered heart palpitations.

One minor nit before we start examining the goods. Some reviews have described the Modbook as a touchscreen device. While, technically, this is true, it's important to note we're not talking capacitive touching here. In fact, you can only use the provided Wacom digitizer pen and its 11 nibs as an input device. While that lack of skin on screen action, coupled with its high price, probably keeps the Modbook from being a truly mainstream device, it is by no means a deal breaker.

The tablet touts both Bluetooth and the standard two USB ports should you want to use it with a full-size keyboard and mouse. Hell, you can even mount it on your wall or hook it up to an external monitor via the standard mini-DVI port (like we did), if you prefer a slightly larger screen to show off your squiggly Garfield drawings. 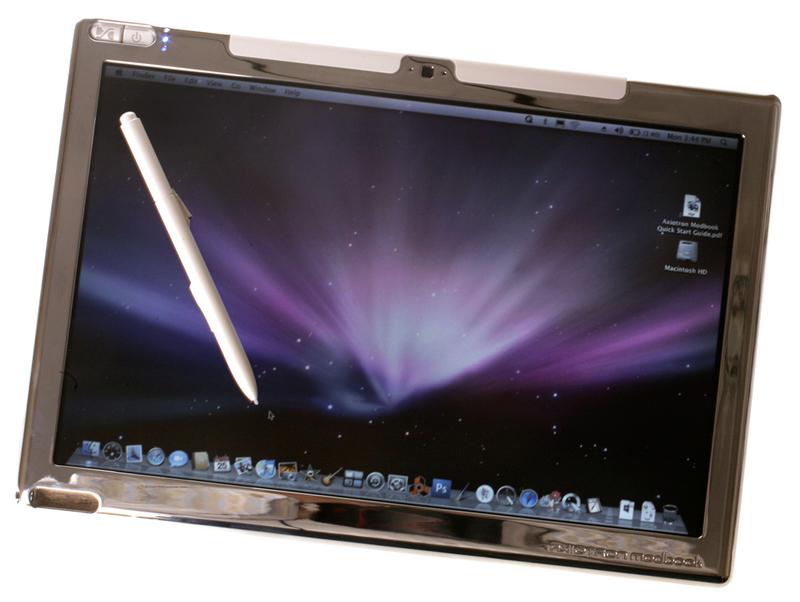 In fact, given that the Modbook is essentially a niche device, it's still impressively versatile. It comes pre-loaded with Apple's Leopard, including the OS's surprisingly accurate built-in Inkwell handwriting recognition software. Using their formidable engineering kung fu, the folks at Axiotron also crammed a GPS unit into the Modbook, which -- ahem -- lets you geo-locate to your heart's content.

As far as looks go, Modbook stays true to Apple's overriding aesthetic sensibilities. It's clear Axiotron has done some Frankensteining here and there (the bottom portion of the tablet is identical to the MacBook while the top half is basically a Wacom Penabled Digitizer), but theModbook still looks like something Steve Jobs could potentially unveil from an envelope. Both the shell and interior display frame are built from aircraft-quality magnesium alloy -- not that anodized crap.Axiotron also went for the trifecta of metal plating -- that's nickel humping copper and topped off with a little chrome for good measure.While that combination certainly attracts smudges, it's also extremely scratch-resistant.

Our only major quibble with the Modbook is its lack of graphical zing and relatively small screen. For designers, Intel's standard GMA X3100with 144 MB of SDRAM doesn't exactly do the trick, and it would've been nice to include something like Nvidia's GeForce 8600M GT cards that come standard on MacBook Pros. Similarly, the 13-inch screen size, while bigger than other slate-style tablets out there, still isn't the ideal dimension for a device that purports to be ideal for artists and designers.

So yeah, it's clear the Modbook isn't for everyone. If your days consist of endless spreadsheets or you're some hack banging out gadget reviews, the $2,300 base price is a hard thing to justify. That said, the fact that Axiotron has transformed a run-of-the-mill MacBook into a hyper-specialized device is probably a smart move considering Apple is undoubtedly working on its own mainstream 'Macblet'.

__TIRED:__ Did we mention this is a pricey ($2,290) device? Stylus pen occasionally loses connectivity or freezes and requires reset. Heavy;weighs as much as a 15-inch Macbook Pro (5.5 lbs).