Apple’s iPhone and Samsung’s Galaxy lineup took about five years to really hit their stride. Now with five smartphones of its own in the books, Google is

I got a chance to sit down and talk with Google’s Rick Osterloh,

for a preview of the Pixel 6

yep, those rumors were true,

However, before we dive into the new stuff, let’s

take a look back at the Pixel’s journey

at the new Google Store in NYC.

Motion Sense as a way

, which sidestepped typical flagship aspirations. While it had a neat bio-resin coating, it didn’t offer much in the way of improved hardware.

last two Pixels may have seemed

throwing ideas against a wall to see what stuck, but all the while

So here we are today with the Pixel 6, which is not only Google’s new flagship, but it’s the first Pixel to use a

“Our team’s mission in the hardware division is to try and create a concentrated version of Google, and we do that by combining the best assets the company has in AI software and hardware,” Osterloh told me.

, Google decided to design its own system-on-a-chip (SoC) to deliver the kind of AI and machine learning performance Google needs to make its vision a reality.

“We’ve been doing that a little bit with Pixel over the years with HDR+, Call Screener, and Night Sight, and all these things are using various techniques for advanced machine learning and AI,” Osterloh said.

“But what has been very frustrating is that we’re not able to do as much as we would like on phones.”

That’s about to change. Osterloh said the new chip

“is our biggest smartphone innovation since we first launched the Pixel five years ago.”

“The name is an obvious nod to our open-

“The major aim is to try to bring our latest AI innovations to the phone so we can literally run our best [AI and machine learning] models on the Pixel.”

Osterloh didn’t give many details on Tensor’s

chip architecture, overall performance, or even who Google partnered with for its production. But he did say that

center level” AI models locally on the chip, without the need for help from the cloud. The chip’s support for more powerful on-device AI performance is also a privacy benefit, because the phone won’t need to send your data to the cloud for additional processing.

“No one has developed a true mobile SoC, and that’s where our starting point was,” Osterloh said. “

We see the future of where our research is headed and we co-designed this platform with our AI researchers.”

So what exactly does Tensor make possible that previous chips couldn’t?

Osterloh showed me some Pixel 6

features coming this fall, made possible by Tensor on a near-

final prototype of the Pixel 6. Unfortunately, Google prohibited Gizmodo from recording photos or videos of the devices during this preview, but I can say the Pixel 6 looks as good in the images and videos Google provided as it does in person.

me a pretty standard

most common issues with mobile photography: trying to snap a sharp picture of a subject that just won’t sit still. P

arts of the photo,

by leveraging Tensor and computational photography, the Pixel 6 was able to convert the photo from one that

might end up in the recycle bin to something you’d actually want to keep.

Osterloh says that by designing Tensor to suit Google’s needs, Google was able to change the memory architecture to more easily manipulate data—even while it’s being processed—to better offload certain tasks to Tensor’s AI engine, which improves both performance and power efficiency, instead of relying more heavily on a chip’s image signal processor like a lot of other processors do.

“What we’re trying to do is turn this physics problem into a solvable data problem by using Tensor,” Osterloh said.

“The way we do that is for a scene like this, we will take images through two sensors at once through the ultra-

wide sensor at very fast exposure, so we can get a really sharp picture, and then we take it through the main sensor at normal exposure.” 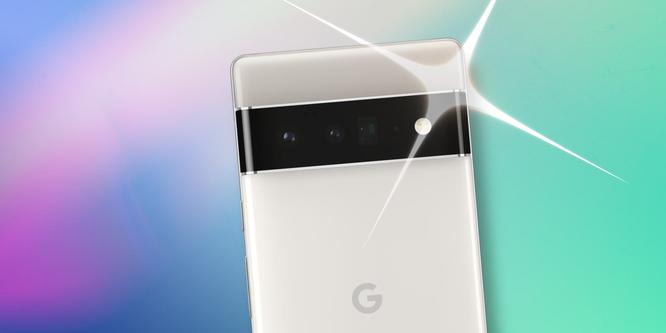 he computations don’t stop there.

And so we use all of these machine learning techniques at the same time in parallel, using the TPU and all available resources in the phone.”

The result was a picture that,

while not 100% tack sharp, was still heads and shoulders above what had previously been a cute but blurry photo.

Osterloh also showed a comparison between videos of the same scene captured by an iPhone 12, Pixel 5, and a Pixel 6. When it comes to video

Tensor, the Pixel 6 is able to do things like provide real-time HDR while also using object detection to identify a sunset, which allows the Pixel 6 to intelligently adjust white balance and increase dynamic range. Those

were aspects both the iPhone and Pixel 5 weren’t able to properly factor in.

“You can almost envision Tensor as being built to perform computational photography for video,”

. “To be able to process machine learning in real-time on our videos as they’re going is a big change from where we’re at.”

But perhaps the most impressive demo I saw was when

a video of someone giving

a presentation in French. Despite taking six years of French in middle and high

school, understanding more than a

random phrase or two was way above my level. However, with a couple of

quick taps, Osterloh was not only able to turn on live captions, he also enabled live translation, allowing the Pixel 6 to convert the recording from French to English in real time.

have been available for some

they’ve never been available for use at the same time on a phone, simply because previous chips couldn’t

deliver the kind of AI and machine learning performance to support them.

Osterloh also demoed another new voice dictation feature in Gboard that lets you speak instead of type while texting, and the

able to automatically correct many of its mistakes in real-time. In

cases where it misses, you can correct things yourself without interrupting the message. It’s nice to see that Tensor also supports straightforward improvements like

greatly enhancing the speed and accuracy of speech recognition.

Now let’s talk about the Pixel 6 itself.

, but the Pixel 4 and 5 were criticized for being underwhelming. So I asked

Osterloh if Google would ever make a flagship-level phone again.

with previous Pixels, but reimagined in a fresh, playful, and quite enchanting new way. Instead of a two-toned design, Google opted for a tri-color aesthetic with glass panels in front and back, available in several combinations that to me looks like an avante garde interpretation of a hardware store paint swatch—

I mean that in the best way possible.

Screen bezels are even thinner than before,

the Pixel 6's selfie cam has shifted more toward the center, and both have

big, bright OLED displays. Both the Pixel 6 and 6 Pro are actually quite large. We’re talking devices with screens

felt similar in size to

of a standard camera bump in back

, the Pixel 6 has what Osterloh described as a “camera band,

that Google started exploring on the Pixel 4. And while we don’t know the Pixel 6's camera specs, the

ro. The base Pixel 6

and ultra-wide cameras, and

the Pixel 6 Pro at long last gets a

a bonus telephoto cam with a 4x optical zoom.

Both the Pixel 6 and Pixel 6 Pro feel

. To me, this is a hugely encouraging course reversal

Google of not caring about the Pixel’s hardware

Now let’s return to Apple and Samsung’s phone lineups, which took years to hit their stride.

Apple’s sixth phone was the iPhone 5, which is one of the most beloved iPhones of all time and right up there with the original iPhone and the iPhone X as the most important iPhones ever. For

Samsung, between the S6 and and S6 Edge, we saw the introduction of a glass design in front and back along with a curved display that essentially crystalized Samsung’s phone design

for the following five years

ith the Pixel 6 and the new Tensor chip, we’re about to see

how Google will use AI and machine learning to really push its vision of ambient computing.

etween Osterloh’s insights, the demos I saw, and the Pixel 6's hardware

, my biggest takeaway is that Google is incredibly confident when it comes to this launch.

Usually, companies try to keep details like this locked down

s much as possible in the age of

leaks and rumors) until they get officially announced. But with the Pixel 6, Google isn’t just doubling down on AI and machine learning, it’s trying to capitalize on more than five years of research and

development in a significant way

hile it’s still too early to call the Pixel 6 a success—we’ll have to wait til the fall to actually spend time with the device—I’m encouraged by what I’ve seen so far.

Tags： parts of an iphone 5,