I first tested an LED bulb seven years ago. It was not a promising beginning.

The bulb was a Par 38 spotlight for a recessed ceiling fixture. The color of the light was a silvery metallic — so chilling and wintery that it made the room feel cold. The final kicker was the price — $125.

Things have changed a lot since then.

As LED manufacturers have increased the efficiency of the bulbs, fewer are required for a given wattage and bulb type and the prices have fallen precipitously. (At Home Depot, Lowe’s and Wal-Mart, for instance, today’s price for a 90 watt-equivalent Par 38 spotlight is $20 to $30 — 75 to 85 percent less than the one I tried in 2007).

At the same time, the quality of the light produced by today’s LEDs has vastly improved. In my most recent annual home testing, I found that the light produced for most of the bulb categories can be extremely close to that of the incandescent and halogen bulbs the LEDs are designed to replace — so much so that only a lighting expert will notice the difference.

Moreover, the bulbs are so long-lasting — more than 22 years if used for only three hours a day, the average use per bulb per day in most U.S. households — that some manufacturers have incorporated the LED into the fixture itself. When the light finally gives out, you get a new fixture.

As part of my home testing, I installed a GE flush-mounted ceiling fixture in my laundry room. Not only does it look much better than the 50-year-old fixture it replaced, the light it produces appears to be brighter and softer than the 75-watt equivalent compact fluorescent I had been using, even though the new fixture actually produces less light.

With an LED made by a major brand, the transition should be easy. When I compared GE’s, Philips’s, Cree’s and Sylvania’s most recent generation of Energy Star-rated A19 and A21 bulbs with several incandescents that I am hoarding for my home testing, I found the light produced by the LEDs to be remarkably close to the old-style bulbs. GE’s A19 60-watt equivalent Energy Star-rated LED and its 60-watt incandescent are indistinguishable.

The A21 is the LED equivalent of an old 100-watt incandescent bulb. (Courtesy of GE)

The Sylvania Par 20 spotlight creates a small pool of light and is ideal for highlighting art work or a dressing area. It is hung from a track light fixture. (Courtesy of Sylvania)

There is a second type of LED bulb available in the A19 and A21 size that did not exist as an incandescent called “daylight.” The light produced by these LEDs is blue-white and resembles daylight, hence the name. The daylight bulbs are more popular in some parts of the United States than others, especially in the Midwest with its long gray winters, said Pam Price, retail marketing manager at Sylvania.

The daylight bulbs are also popular with older buyers because their blue-white light heightens contrast and makes reading easier, added Mike Watson, vice president for product strategy at Cree. Testing this for myself, I tried reading several types of publications under an A19 60-watt equivalent Energy Star daylight bulb. The light definitely did heighten the contrast, most noticeably when I read a newspaper.

When I started testing other types of LED bulbs in my house, the transition from halogen or incandescent was not as seamless as I expected. With the other LED categories, there are additional variables to consider, and in some cases the issue was not the LED but the particular conditions in my house, such as ceiling height. Before you start testing the other types of LEDs, you need to be conversant with these two LED basics: 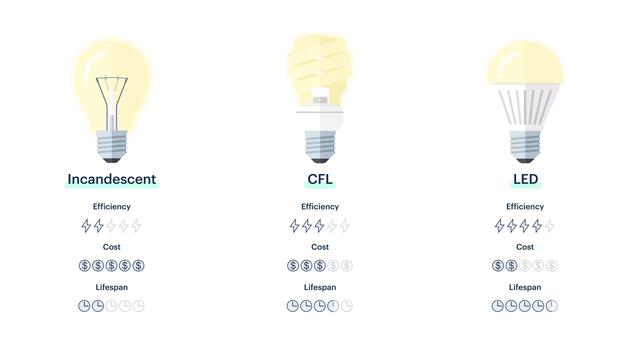 Although LEDs are now available for most residential lighting fixtures, I focused on the bulbs designed for the fixtures that are among the most widely used — recessed ceiling fixtures, track lights, bathroom strip lighting and chandeliers.

For recessed ceiling fixtures, commonly known as “ceiling cans” because they look like coffee cans pushed up into the ceiling, there are two LED options: “floods” that provide general illumination throughout the space, and “spots” that can inject some drama because they only illuminate the area directly beneath the fixture and the light at the center of the illuminated area is much brighter than the light at the edge.

Because there are so many choices here — I tested nine floods and eight spots — the issue for most people will likely be “which one is right for me?” You can simply switch out what you’re using now for the LED version or experiment.

Within the floodlight category, the main difference between the BR30 LED and the BR40 LEDs that I tested is the amount of light produced. With 1100 lumens, the BR40 LEDs are about 40 to 70 percent brighter than the BR30 LEDs. In a two-story space they’ll “wash” the walls and ceiling as well as the floor.

The Philips BR30 conventional flood light is best in a recessed fixture. (Courtesy of Philips )

The Philips Par 38spotlight focuses a beam to light a small area. (Courtesy of Philips )

But for a living room like mine with an eight-foot ceiling, the BR40s were much too bright; the BR30s were a better choice for background lighting. But, within that subcategory, there are still further refinements. All four brands of BR30 that I tested offer a 5000K daylight version (the light was too blue and ethereal for me), Sylvania’s BR30 has 10 to 25 percent more lumens than the other BR30s, which makes the room brighter, and GE’s BR30 Reveal has special filters that make the colors appear more vibrant.

With an eight-foot ceiling and recessed cans about six-feet apart, I found GE’s and Sylvania’s Par 38 LEDs with fewer lumens (950 and 1050) and the wider 40-degree angle worked best because they provide both ambient and task lighting. When a sofa is placed directly below the ceiling cans, the brighter central area of light can accommodate reading so I don’t need table lamps.

But were I to put Par 38 LEDs into a two-story space, I would opt for Cree’s with a narrower 25-degree angle and more lumens (1500) to maximize the amount of light reaching the floor. Because all the light from the Par 38 bulb is focused downward, the walls and ceiling would not be lit at night, but this can make a large volume space feel smaller and more intimate. At the floor level, the light would not be bright enough for reading, so you would need to add a few table lamps.

The Par 20 LED spotlights that I tested fit onto a track light fixture. These bulbs are most often used to light artwork. For the three brands I tested, GE, Sylvania and Philips, the range of color temperature (2800 to 3500) and beam angle (20 to 40 degrees) offered a lot of choice. In my stairwell, Philips Par 20, 25-degree angle, 3000K made the African sculptures that I have displayed there really pop. For the stairs, GE’s Par20 softer 2700K, 25-degree angle LED was perfect. Sylvania’s Par 20 3000K 40-degree beam angle was too wide for this spot and Sylvania’s Par 20 3500K 25-degree angle was too bright.

For the Hollywood strip lighting above my bathroom mirrors, I tried GE’s and Sylvania’s “decorative” G25-size, globe-shaped LEDs. GE’s 2700K version with 350 lumens provides soft, even light that is nearly identical to the incandescent bulbs I had been using before.

Sylvania’s version is brighter with 440 lumens and a higher 3000K Kelvin temperature. For a master bathroom with two spouses using the sinks at the same time as they get ready for the workday, Sylvania’s brighter bulbs could be preferable, especially for applying make up.

Switching to LEDs for your chandeliers will be easy. I tried GE and Philips 2700K B13 candle with a small candelabra screw base. Both provide a soft light that creates a nice atmosphere for dining conversation.

has an architecture degree from Harvard. A native Washingtonian, she grew up in Fairfax County and now lives in Ann Arbor, Mich. If you have questions or column ideas, she can be contacted at

Tags： difference between a19 and br30,