As coronavirus infections rage among the unvaccinated, those suspicious of the shot are championing a new supposed

-19 cure. Thanks to a dubious study of ivermectin, a drug used in humans to treat parasites like scabies, cranks have seized on the drug as the new solution to coronavirus prevention and treatment.

Devotees have besieged pharmacists with prescriptions from shady online prescribers, forcing pharmacies to crack down and treat the antiparasitic drugs like opioids. As human-approved ivermectin prescriptions have been harder to come by, enthusiasts have taken to raiding rural tractor supply stores in search of ivermectin horse paste (packed with “apple flavor!”) and weighed the benefits of taking ivermectin “sheep drench” and a noromectin “injection for swine and cattle.”

“There is certainly a noticeable increase in calls to poison centers regarding ivermectin being misused,” a Texas-based poison control specialist, who requested anonymity due to concerns of repercussions, told The Daily Beast via email. “It’s clear that a vast majority are associated with a belief that it will prevent or treat COVID. That said, I do want to be careful not to be sensational—there’s no epidemic of ivermectin overdoses in hospitals, but it’s needless suffering given the lack of conclusive evidence of a benefit.”

In some textbook cases, Facebook users have recommended using the drug against doctors’ orders.

“Personally I haven’t had this situation, but if I did, I would sneak horse paste into the hospital and would rub it into the armpit myself to save my loved one,” a member of an ivermectin Facebook group advised another.

before it, the hype for ivermectin comes against the advice of the medical community, which has been skeptical of the drug’s purported benefits. Although ivermectin optimists point to a few trials of the drug on COVID patients, two of the flashiest studies have either been withdrawn or heavily criticized due to errors.

by the medical research group Cochrane did not rule in the drug’s favor.

“Based on the current very low- to low-certainty evidence, we are uncertain about the efficacy and safety of ivermectin used to treat or prevent COVID-19,” the Cochrane report, released July 28 read. “The completed studies are small and few are considered high quality [...] Overall, the reliable evidence available does not support the use of ivermectin for treatment or prevention of COVID-19 outside of well-designed randomized trials.” The report called for further randomized trials of ivermectin on COVID patients.

“Most overdoses will be mild and simply result in some gastrointestinal distress and maybe some drowsiness, but severe overdose can cause significant neurological toxicity,” the Texas poison control worker said. “The irony is, in a severe ivermectin overdose (which is rare, you really have to be slamming this stuff to achieve that) patients will end up needing to be intubated to protect their airway, meanwhile, a lot of them are taking the ivermectin to allegedly treat their COVID... to avoid ultimately being intubated and placed on a ventilator.”

As vaccine skeptics suck down tubes of horse paste and hit up poison control centers with calls, the FDA has patiently explained why people should not take medicine intended for livestock. Though they contain the same active ingredient approved for use in people, animal medications are “highly concentrated because they are used for large animals like horses and cows, which can weigh a lot more than we do” and as a result “Such high doses can be highly toxic in humans.”

That kind of scientific caution is hard to find on the internet, where users on Telegram, Facebook groups, and Amazon comments sections guide each other on how to find and use the drug and evangelize it to others.

Facebook groups offer support and answers to users who are confused, scared, and ignorant. When a poster has a question about how to convert horse doses to people doses, commenters are only too happy to provide suggestions. Their answers may prove a threat to your liver health, but they fill the vacuum of information for those committed to exploring the frontiers of COVID medical quackery.

Posters ask questions not readily answered by the legitimate medical community, like what size dose of the phoney miracle drug to give an 8-year old recently diagnosed with COVID-19. Group members respond with a chart that lists suggested doses in human-approved ivermectin tablets or “notches” for the markings on tubes of horse paste listed according to patient weight.

The chart, a frequently pasted image in Facebook groups touting the drug, is sourced to Gustavo Aguirre Chang, a Peruvian doctor and evangelist for ivermectin’s use in treating COVID-19. 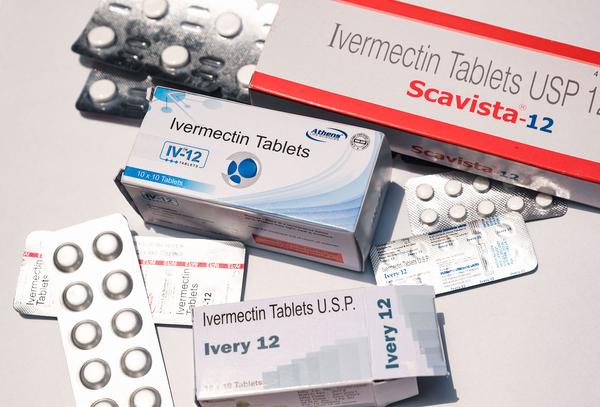 On Amazon, where customers can buy horse paste ivermectin without a prescription, purchasers speak in coded reviews to extol the drug’s supposed benefits against COVID-19. “My ‘horse’ had no negative side effects, and now he tells me he feels like a million bucks and is now COVID free,” one customer wrote. “If you are intelligent enough to be able to weigh yourself and smart enough to do fractions you can do this safely” another assured readers.

Amazon has become so popular as a source for horse-to-human ivermectin that the purchases are starting to warp the company’s recommendation engines.

Its popularity as a backdoor for people to obtain ivermectin horsepaste is so great that Amazon’s recommendation systems now push customers to buy zinc, vitamin C, and quercetin—other popular (and bogus) coronavirus home remedies—alongside pulse oximeters, often purchased by those infected with COVID-19 to monitor their oxygen levels.

“This is actually the primary situation we get called about,” the Texas poison control worker said. “The big headache for poison control centers is that people are circumventing their physician and going to animal supply stores and acquiring ivermectin which can be purchased without a prescription with the understanding it’s for large animal veterinary use only. However, this form of ivermectin is a 1.87% paste [in delicious apple flavor]—it’s so concentrated because it’s formulated for 1,500-pound horses, not humans. Unless someone knows what they’re doing, it’s very easy to overdose on the paste.”

When horse ivermectin isn’t available, believers will scour the animal kingdom for other sources. On one forum, a European ivermectin fan complained that he could only find the drug in quantities approved for pet parrots, leading to an expensive cost-per-dosage. On Facebook, an ivermectin-curious woman shared a picture of “sheep drench,” asking if the ovine de-louser would help fight COVID-19. The bold label printed on the bottle warning “NOT SAFE OR APPROVED FOR HUMAN USE, WHICH COULD CAUSE SEVERE PERSONAL INJURY OR DEATH” in the image did little to deter curiosity.

One pharmacist, who has worked in Missouri and Illinois over the course of the pandemic, said they’d received approximately 10 ivermectin prescriptions in recent months: an uncommon number for a drug typically used to treat scabies or serious lice infestations in humans. About six of those 10 prescriptions raised red flags, like weirdly large dosages or doctors who canceled orders when questioned.

“If I could verify based on current dosage information for its available indications that the prescription appeared to be for a valid diagnosis I would dispense with no issue,” the pharmacist, who requested anonymity due to concerns of repercussions at work, told The Daily Beast. For the six unusual orders, the pharmacist called the prescriber. Half of those doctors never answered. Of the three that responded, “two canceled the prescription—one electronically and one verbally while on the phone. The third verbally confirmed it was for the treatment of acute COVID infection and did not deem to cancel it.”

The electronic cancellation came from a prescriber far out of state, in California.

An Arizona-based pharmacist told The Daily Beast that their pharmacy had been inundated with ivermectin prescriptions from America’s Frontline Doctors.

The group was founded in 2020 by Dr Simone Gold, currently awaiting trial on charges related to

in the Jan. 6 insurrection, and pushed an anti-lockdown, pro-hydroxychloroquine agenda with the help of Dr. Stella Immanuel, the so-called “

” doctor who has professed a belief in aliens and “reptilian” overlords.

After spending much of the pandemic touting hydroxychloroquine, America’s Frontline Doctors now offers tele-health consults for $90 and directs prospective patients and visitors looking to get scripts for hydroxychloroquine and ivermectin filled to Ravkoo, an online pharmacy startup based in Florida.

“At the peak we were getting between 5-10 scripts per week. (Demon sperm ‘MD’ was calling them into our voicemail). Recently, it’s been 1-2 a month thankfully,” the Arizona pharmacist messaged The Daily Beast.

“Our biggest problem was when one other Rph [registered pharmacist] filled a script for it and the floodgates opened after that. Those being from the TX demon sperm MD (I forget her name, honestly). The office would never answer the phone when we called to question it but we would just write down the info and document it before we destroyed the rx.”

Although the pharmacist had been able to reason with would-be ivermectin patients, some colleagues had found themselves facing “ladies threatening to sue, being accused of overstepping our boundaries, etc,” the Arizona pharmacist said.

Pharmacies’ reluctance to fill dubious ivermectin scripts has prompted America’s Frontline Doctors to start recruiting plaintiffs for a lawsuit. The group published a plaintiff intake form on its website to screen for doctors and patients who’ve had pharmacies refuse to fill their ivermectin and hydroxychloroquine prescriptions.

Still, at least one customer changed their mind after learning more about the drug.

“Only one person I spoke with actually agreed to not wanting to pick it up after she told me her friend referred her to the telemedicine appointment,” the Arizona pharmacist said. “She had no idea what she was getting or that it was useless.”