When the Carolina Panthers first got to Wofford College for training camp, there were slower days of practice during an “acclimation period.” Since Tuesday, the team has been practicing in pads, ramping up the intensity.

But Thursday’s practice featured something different. Instead of spending a portion of practice doing individual, one-on-one or seven-on-seven drills, almost the entire practice was spent in a scrimmage environment, putting different groups and combinations against each other all over the field.

“I thought they just needed to get out and play some football,” Rhule said. “Drills are great. The 9-on-7 is great and I like those things, but sometimes you just have to get out there and get reps and play and put things on tape and see what we’re doing well, see what we’re not doing well; seeing guys against different groups. Our guys like to compete, so we just put the ball down and played today.”

Contact was extremely limited with no real hitting or tackling.. The tempo on the defensive side was especially reduced for the two-minute drills at the end of practice.

Both sides of the ball had their moments, but despite a goal of having multiple turnovers over the course of the day, the defense had none. The offense was also called for a variety of penalties, including a false start during the first team’s two-minute drill. Robby Anderson caught a solid pass from quarterback Sam Darnold in the end zone, but proceeded to the kick the ball with his foot in celebration. He had to run a lap to the

Christian McCaffrey broke out for a number of good runs, including a long one downfield.

“You go back and look at that, that play, DJ (Moore) is blocking 45-yards downfield,” McCaffrey said. “That’s the kind of stuff that helps you win games. It’s not just one guy or two guys, it’s 11 guys coming together as one and that’s when you can play special ball as a team. The next play, we ran another run play on the 15 yard line, and Robby dug out of a safety and stuck his nose in there and made a big block.”

McCaffrey also had an impressive short diving grab as he went to the ground.

Darnold had another solid day, but went 5 for 8 during the two-minute drill, including one that bounced off Anderson’s hands. He completed passes to tight end Dan Arnold, Moore and McCaffrey, in addition to scrambling himself.

His connection with Arnold has been one of the standouts of training camp, especially with the Panthers need to get a tight end more involved in the passing game. Darnold found Arnold in the end zone for a touchdown and often looks for him downfield.

Sports Pass is your ticket to Charlotte sports

Get in-depth, sideline coverage of Charlotte area sports - only $1 a month

Panthers tight ends in 2020 combined for a league-low 204 receiving yards, per ESPN Stats and Information, and had just 27 receptions and two touchdown catches. A refresh was needed.

“I think (Arnold’s) a unique player in that he’s a receiver, tight end combination guy that you can use in a lot of different ways,” Rhule said. “I think all of our tight ends have gotten more involved this camp, to be quite honest with you. I think Ian (Thomas) is having a fantastic camp. ... We like our tight ends, we really do, but Dan in those crucial third-and-long situations, we’ve been able to find him.”

Rhule tried out a variety of game situations during the course of practice. One of those was a field goal block, testing to see the Donte Jackson’s response in that situation by moving the football himself at the end of the first team’s two-minute drill.

Kicker Joey Slye is only kicking three days a week. He will kick at Friday’s practice. All three teams made it into kicking range for the two-minute drill. 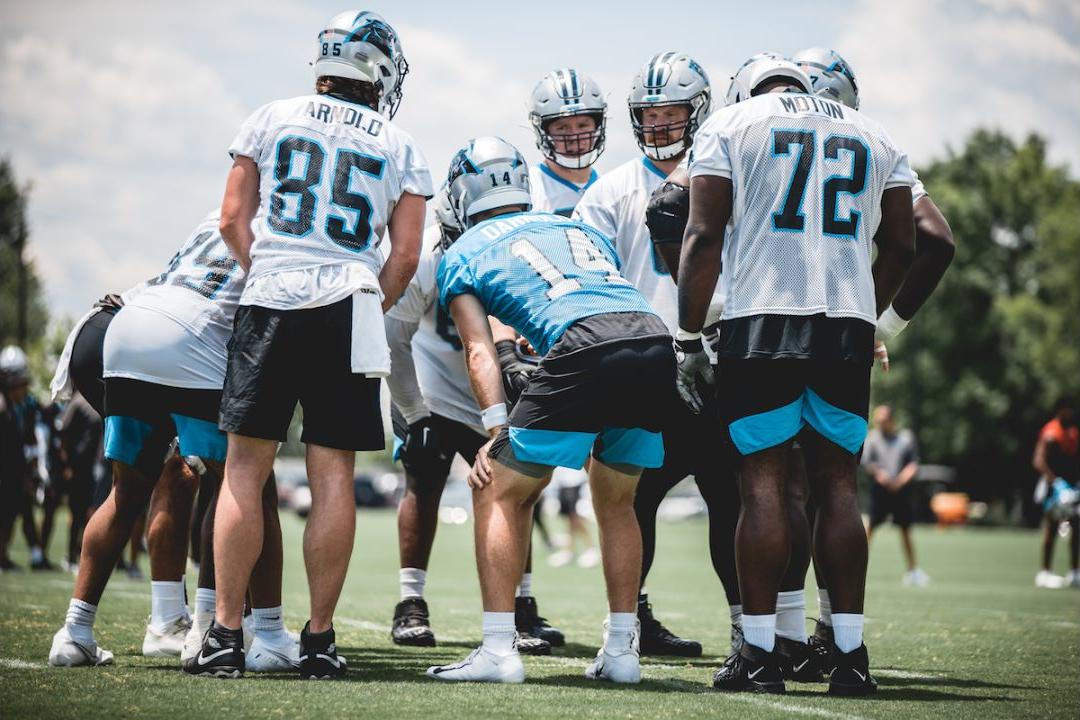 Team owner David Tepper was in attendance at practice for the first time during training camp. Tepper appeared at multiple practices during the offseason training program. He spent a significant portion of practice talking with general manager Scott Fitterer and watching the 11-on-11 periods closely.

Wide receiver David Moore had a solid day of practice. He caught a number of passes on the second-team offense after a slow start to training camp.

Quarterbacks P.J. Walker and Will Grier have been switching between who is leading the second-team offense. During Thursday’s practice it was Walker, who has been up and down in camp.

The Panthers signed fullback Rod Smith a day after waiving undrafted fullback Mason Stokke out of Wisconsin. Smith did not play last year, but was a solid contributor to the Dallas Cowboys in 2017 and 2018. The team also signed safety Brian Cole and waived receiver Ventell Bryant.

In a corresponding move, the Panthers waived undrafted punter Oscar Draguicevich III out of Washington State. Joe Charloton, who is in his second year with the team, is now the only punter on the roster. He has improved as a punter and holder, a role he did not take on until his senior year at South Carolina.

“I’m very happy with where Joe is. The other day (he had a) 5.4 hang time, put it inside, he’s putting the ball where we want it,” Rhule said. “His holding, which was not a strength for him coming in. He’s gotten much more consistent with this hold. I think Joe’s having a good camp.”

Play of the day

A tip of the cap goes to Chuba Hubbard. The rookie running back has had a slower start to training camp, not necessarily making much of a splash, but he stood out Thursday. He caught a low pass from Darnold near the end zone and then quickly darted up field and into the end zone.

Quote of the day

“(Daviyon) Nixon can sing. There’s a few guys that can sing. (Long snapper) Thomas Fletcher can sing. He sang Italian, he sang Andrea Bocelli perfectly with his shirt off in front of the whole team. That was a sight.”

The team will practice at Bank of America Stadium on Friday as part of the Panthers’ Fan Fest celebration. Practice will take place from 7-9 p.m. with fireworks and a laser show following the night on the field. More information on attending can be found

Alaina covers the Carolina Panthers for The Charlotte Observer. Before coming to Charlotte, she worked at The Dallas Morning News and The NFL Today on CBS.

Support my work with a digital subscription