NVIDIA has just released a new version of their Quadro & GeForce OS X driver in an effort to add OS X 10.11 El Capitan support and beta support for MacBook Pro and iMac computers with NVIDIA cards.

As the changelog for this version of the Quadro & GeForce driver for OS X says, the 346.03.02f01 release includes a graphics driver update to provide OS X El Capitan 10.11 build 15A284 support.

Furthermore, the 346.03.02f01 Quadro & GeForce driver also comes with "performance improvements and bug fixes for a wide range of applications."

As described on the release notes page, the

version also includes beta support for iMac and MacBook Pro systems with NVIDIA graphics, which should allow owners to be able to switch from Apple's default OS X graphics driver to the one provided by NVIDIA. 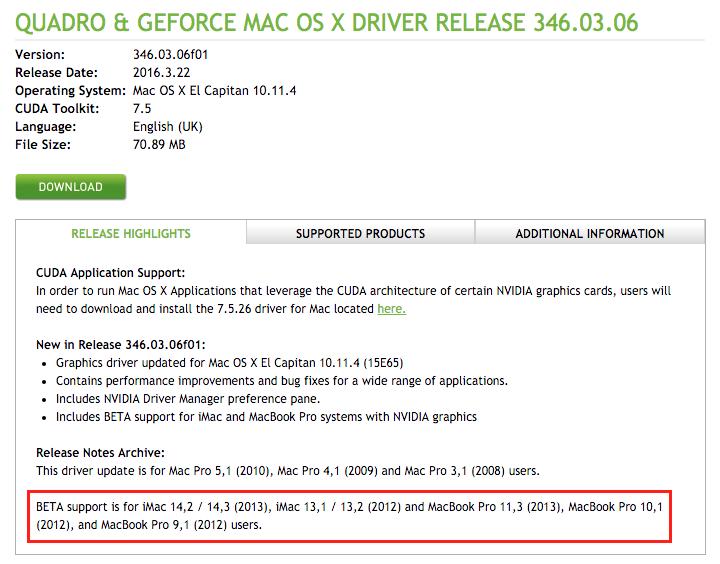 Besides the drivers needed for your graphics card to work properly on a Mac running El Capitan, the Quadro & GeForce Mac OS X Driver installer will also add an NVIDIA Driver Manager preference pane that will help you quickly switch between the default OS X graphics driver and NVIDIA's custom build graphics driver.

Moreover, this can also be achieved from your Mac's menu bar once you activate the NVIDIA Driver Manager status bar item from the preference pane.

The NVIDIA Driver Manager prefpane is also designed to make it easy to enable the Error Correcting Codes (ECC) feature for any supported graphics card, and it can also help to quickly check for NVIDIA software updates.

Additionally, the NVIDIA Driver Manager can also check for driver updates automatically, and it can be set up to download them in the background for simple and quick installation.

As described within NVIDIA's Quadro & GeForce driver installer, "if, for any reason, you are unable to boot your system to the desktop and wish to restore your original drivers, you can do so by clearing your Mac’s NVRAM."

To do that you need to power on the Mac, immediately hold down the Command (⌘), Option (⌥), P, and R keys, and keep them pressed until you hear a second startup chime. Once you go through this simple procedure, your Mac will boot using the default OS X graphics driver.