Victoria’s increased urban density, environmental bent and active-transit network have set the stage for a new car-share program to hit the streets.

With its focus squarely on Victoria, rather than the region, and outlets at the University of Victoria and Camosun College’s Lansdowne campus, Vancouver-based Evo Car Share believes it has the recipe for success in the city.

“I know this will work here,” said Dave Wharf, Evo Car’s manager of business operations. “We think Victoria is perfect for what we offer.”

What it offers is a smartphone application that gives members access to a shared fleet of low-emission hybrid vehicles. Members pay for the time they use the cars — 41 cents per minute, $14.99 per hour and $89.99 per day — and can pick up and drop off the cars anywhere as long as it is within what the company calls the 20-square kilometre downtown home zone.

Members reserve a car using a phone app by tapping its location on a map of the city and they have 30 minutes to get to the car. The doors open using the app and there’s a button to start the engine.

Wharf, from Victoria, said with sustainability a key watchword these days and what he calls a complementary, active-transportation network of bike lanes and walking trails that link up with B.C. Transit, Evo Car brings something new to the mix.

“We are adding that other option for people to allow them to get around,” he said.

That has been heard before in Victoria, where U-bicycle introduced hundreds of drop-them-and-go bikes in 2017 before disappearing in 2019.

And the sustainability angle wasn’t enough to keep Current Taxi and its fleet of 100 per cent electric cars on the road in the region. The company retreated to Kelowna this year.

And while it was never in Victoria, Car2Go, which had a similar service to Evo Car, only lasted a few years in Canada before its German parent company closed up shop in North America in early 2020. That included a Vancouver operation that had nearly 250,000 users. 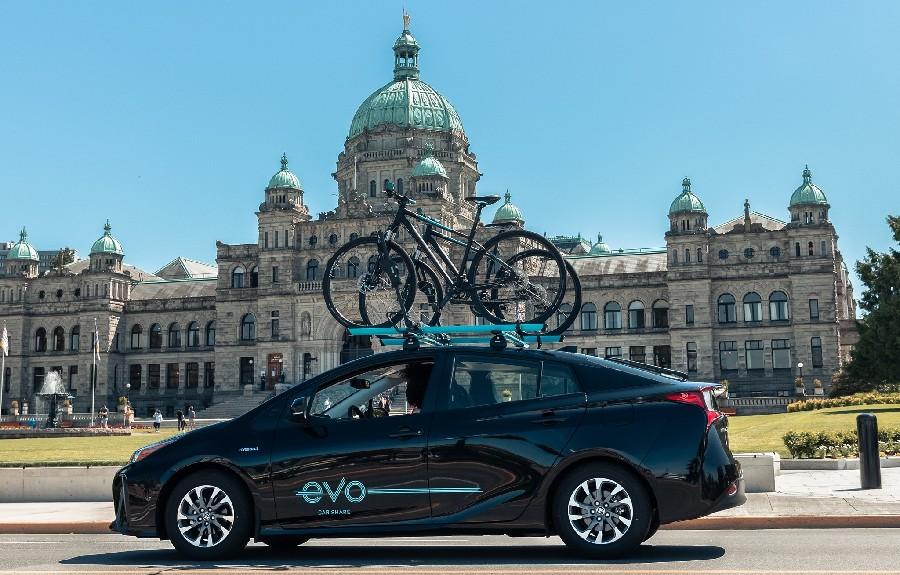 “We are local and that made a huge difference in Vancouver, and we are backed by BCAA,” he said. “We really focused on B.C., Vancouver first and now Victoria. That helped us stay in the market.”

Wharf said Car2Go was profitable in Vancouver, but the company had operations all over North America that were not doing well.

“It was owned by an international company that was looking at its members as numbers,” he said.

Wharf said by contrast Evo Cars, which has operated for six years in Vancouver, has a local team that can relocate cars to optimum areas to suit demand, and knows how to keep them clean and running for a consistent experience.

“We keep our availability high,” he said.

To start, the company has delivered 80 Toyota Prius vehicles to the city and was starting to deploy them Thursday.

Wharf said the selling feature is that members never have to worry about gas, insurance and, in most cases, parking cost.

The company has purchased permits from the City of Victoria that pay for city parkade use, street use and residential use.

Wharf said it does not cover the 20-minute spaces around the downtown.

“We will keep an eye on them,” he said. “We have a relocation team to move them.”

To sign up, members pay a $35 fee — though Wharf said no one should pay it as there are promo offers galore to waive that — and BCAA members can sign up for free.

The cars are meant to be used to get around Victoria, but they can be used to explore the Island or the mainland.

“If you take it to Vancouver you can’t end the trip there, you have to bring it back,” he said, adding members leave credit cards on file and will be charged for retrieval.