vs LG V20: Can LG’s latest flagship trump the last year’s Android powerhouse titan, the LG V20? Read on to find out.

The LG G6 is finally official, and we’re impressed so far. It’s got powerful specs, a gorgeous new design, and runs on the latest version Google’s Android operating system.

Still, last year’s LG V20 is also a formidable smartphone, rounding out 2017 with top-end hardware and an impressive design that attracted plenty of customers. Unfortunately, it wasn’t launched in the UK, to the chagrin of many keen customers.

But which handset is better?

In this article, I’ll answer the following questions:

How do the designs differ?

Which phone has better software?

Which phone is better value for money?

Alternatively, scroll down to the bottom of the page for a summarised version of this article.

Both handsets are attractive by modern standards, but we’d say that LG’s latest flagship has the edge when it comes to design.

has received a major design overhaul when you compare it to the LG G5, and that’s for the best. Gone is the LG G5’s quirky modular design that allowed users to swap out a very limited roster of insertable features – we’ve now got an attractive, solid glass and metal unibody instead.

The other big change is a massive increase in screen-to-body ratio, meaning that much more of the phone’s front face is occupied by display. This very modern design approach is expected to be mimicked by the

later this year, so it’s good to see LG getting in on the trend early.

is also very pretty, featuring a minimalistic metallic design with a very thin bezel. It’s constructed from lightweight AL6013 aluminium, while the top and bottom of the phone are protected by a new silicon-based material called Silicone Polycarbonate.

But it’s fair to say that although very similar, the LG G6 looks and feels just a little bit more premium and refined – though as we’ve said, neither looks bad.

“The V20 is a fine looking phone, but it feels like LG has taken a huge step forward with the whole look of the G6. The limited bezel and generally small body – when you consider the substantial screen – just make it a far nicer phone to hold and look at.”

LG G6 vs LG V20 Specs: Which phone is the most powerful?

These handsets are only launching a few months apart, so there’s not a very big difference in specs. We’d also forewarn you that it’s impossible for us to fully compare the phones’ performance until we’ve reviewed and benchmarked the LG G6. But how do the handsets compare on paper?

Well the LG G6 has a few advantages, not least because of its

. Both devices have the

That said, it’s not a huge difference, and we’d like to see the two side-by-side to see how they compare. Of more interest, potentially, is the fact the G6 supports HDR video content, whereas the G6 doesn’t.

. The LG V20 uses Qualcomm’s Snapdragon 820 chip, while the LG G6 features the newer Snapdragon 821 processor, which Qualcomm says is 10% faster than its predecessor. Both phones use the

and come in 32GB variants, although you can also get a 64GB version of the LG V20.

It’s too soon to properly compare cameras, because quality photography depends on so many different factors. But we do know that both the LG G6 and LG V20 use a

. The LG G6’s rear-facing camera has a 13-megapixel OIS sensor plus a normal 13-megapixel sensor, both with a f/1.8 aperture. You also get a 5-megapixel wide-angle camera on the front with a f/2.4 aperture.

By comparison, the LG V20’s rear camera features a 16-megapixel sensor with a f/1.8 aperture plus an 8-megapixel sensor with a f/2.4 aperture. And the front camera is 5-megapixels with a f/1.9 aperture. Based on that information, we’d wager that the LG G6 camera will offer slightly better quality images from the main camera, on account of its high-resolution sensors combined with a very wide aperture – allowing more light through.

The LG G6 has some other exclusive perks, including

, neither of which are available on the LG V20.

For a full spec comparison, check out the table below: 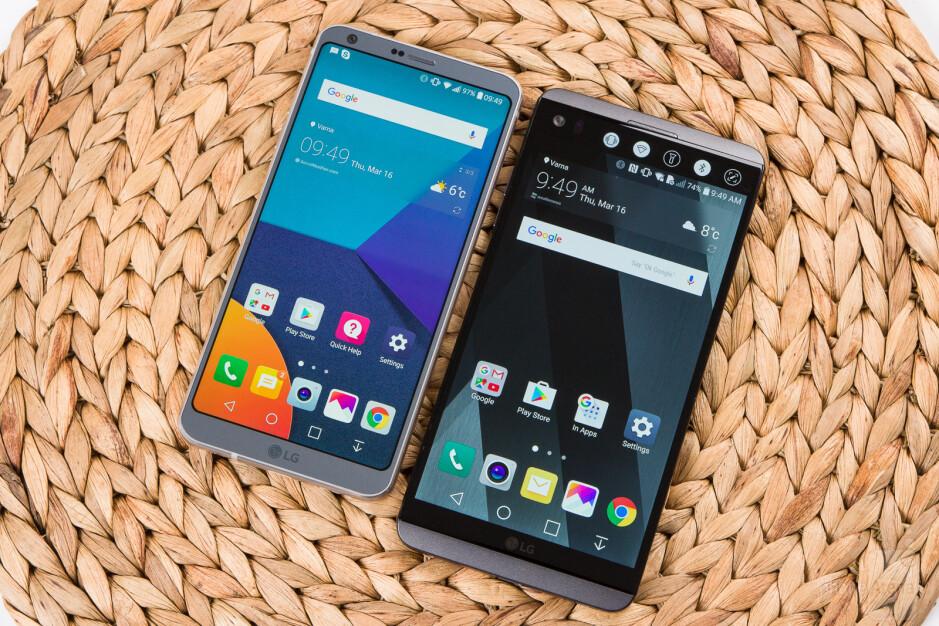 There’s very little to compare when it comes to software; both the LG G6 and LG V20 use Google’s latest Android 7.0 Nougat operating system skinned with custom LG UX software.

Perhaps the biggest difference is that LG has modified the software on the G6 to support the quirky new 18:9 (read: 2:1) aspect ratio. This allows two apps to be used in a multi-task mode, displaying both as perfect 1:1 squares. How useful is this? We’re not quite sure, but it’s unique at least.

LG G6 vs LG V20 Price: Which phone is better value for money?

Until we have official pricing for the LG G6, we can’t say exactly which of these two devices will be better value for money. In the USA, the LG V20 base model costs $799 (£643 at current exchange rates), which makes it one of the most expensive smartphones available.

We’d expect the LG G6 to come in significantly cheaper, likely pricing somewhere south of £600. However, given the volatile nature of British Sterling, we wouldn’t be surprised to see a price bump from the LG G6. In any case, we reckon the LG G6 will offer greater value for money that then LG V20, but we’ll need to see proper pricing before making a final judgement.

Weighing up your options? Maybe this will help:

If you want the best possible hardware, get the LG G6.

It’s a plain fact that the LG G6 has the better specs on paper. You’re getting a faster processor, a more pixel-dense display, and bonus features like wireless charging.

If you want the best value, you’ll have to wait for final pricing.

Unfortunately, we’ve got no idea how much the LG G6 will cost in the UK, so if you’re trying to be frugal, you’ll have to hang around.

Don’t forget to consider the alternatives.

Remember that there are plenty of non-LG phones worth their salt, including the recently released Google Pixel. We’ve also got plenty of big name brands set to launch phones this year, including the Samsung Galaxy S8, which will be announced on March 29.

Here’s a quick overview of the main differences between the LG G6 and LG V20.

Both phones look great, but the LG V20 has a slightly higher screen-to-body ratio and a sleek metal unibody design. You’ll be happy with either, however.

The LG G6 slightly edges out the LG V20 in terms of specs, featuring a better Snapdragon 821 processor, a higher-resolution display, and perks like waterproofing and wireless charging.

The LG V20 isn’t available in the UK, but costs $799 in the USA. We haven’t got LG G6 pricing for the UK yet, unfortunately.

Until we’ve got pricing, we’ll have to keep mum on this one.

VI Video was already generated for this page.

Do you prefer the LG G6 or the LG V20? Let us know in the comments.