Desktops are passé, they say. The PC is an outdated concept. Yet the vast majority of productivity work continues to be done on the humble desktop. The portable nature of the laptop lends itself to theft or accidental damage ranging from drops to coffee spills. Plus, on average, laptops are more expensive than desktops.

, as well as a bunch of minor all-around tweaks.

The Tiny has four USB 3.0 ports, a new "always-on" USB port, and a Gigabit Ethernet port and 802.11n Wi-Fi wireless. Two USB ports, including the always-on port, are on the front panel with a microphone and headphone jack, while the other two USB ports are on the back panel. As its name suggests, the always-on USB port can be used to rapidly charge USB-powered devices. We charged a Samsung Note 8 tablet, iPhone 5 and BlackBerry Z30 smartphone even when the desktop was powered down.

Another handy new M93p feature is a "keyboard" port on the back panel. The otherwise normal USB port allows a USB keyboard that is plugged in to power up the Tiny with the Alt+P shortcut. This is useful when the Tiny is mounted in an out-of-the-way location. Finally, the Tiny punches above its weight class with three monitors: Two DisplayPorts and one VGA port. (More on that later.)

As its name suggests, the Tiny sports a compact form factor: It's barely as thick as a golf ball. This size makes it easy to stash the desktop machine just about anywhere on or around the desk. Though rubber feet means the chassis can rest flat on a tabletop without slipping, the review unit PC shipped with a detachable plastic stand to hold the M93p upright. The plastic stand is lightweight and looks cheap, but it works as advertised.

To take advantage of its form factor, Lenovo offers a variety of deployment options for the M93p. These include the capability to mount the Tiny onto the back of a monitor using an optional VESA monitor mount accessory, as well as a new "sandwich mount" that pairs the Tiny with a monitor arm. (These accessories are optional and weren't available for review, but I felt it worth mentioning.)

Belying its small form factor, the Tiny can power up to four monitors at a full HD resolution (1920x1080). As stated, out of the box the PC connects to three separate displays Two DisplayPort and one VGA monitor. The beauty of DisplayPort is that it's a simple matter of getting the appropriate adapter. (Lenovo sells DisplayPort to DVI convertors at a reasonable $15.)

To be clear, attaining the quad multimonitor configuration does require a bit more work. The recommended approach is to get two units of Lenovo's

($79.99 each). The adapter functions in a similar fashion to

by merging two separate monitors into a larger display powered by a single port. (Both monitors must have the same resolution for this to work). When deployed with two full HD monitors, the adapter will appear as a larger 3840x1080 display to the Tiny.

In our tests, we were also able to power the first two monitors using just one DisplayPort to Dual-DisplayPort Adapter, with monitors three and four directly connected to the remaining DisplayPort and VGA port. While the capability to drive all monitors directly from the onboard Intel HD 4600 integrated GPU may seem trivial to non-multimonitor users, this does offer improved responsiveness with lower CPU utilization over alternative USB-based 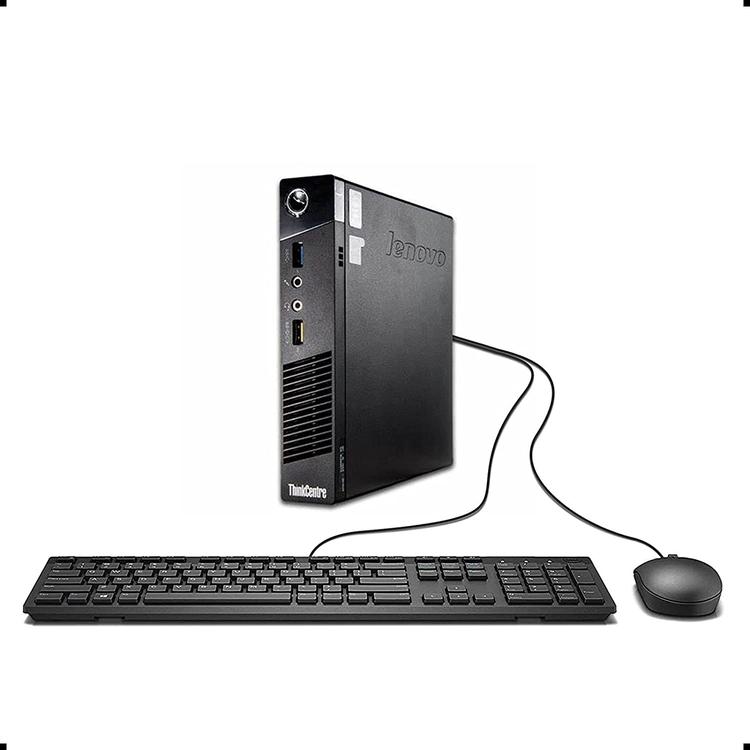 The Tiny desktop booted up in less than 20 seconds. The slower HDD found in the default configuration did cause apps to launch notably slower — a few seconds to launch, compared with almost instantaneous launches using SSDs &mash; though 128GB and 180GB SSD storage configurations are available as an option with the Tiny.

The Tiny runs cool, registering as only slightly warm to the touch, even after hours of use. The fan was whisper quiet; under normal circumstances, you can't hear it. There was no "junk" software other than the trial version of a certain antimalware suite installed, though your mileage may vary depending on location.

It's evident that Lenovo spared nothing in making the Tiny an ideal desktop for business users. The Kensington security lock allows the Tiny to be locked down in the office, and its placement prevents the chassis from being opened at the same time. An optional chassis intrusion switch can quietly record any access to the system's interior and issue an alert when the system is next started up.

Other business-centric capabilities of the Tiny desktop are not as visible, but just as important. For example, Lenovo says the Tiny features 15-month platform stability, with no planned hardware changes that may affect the preloaded software image. This means that small businesses can stagger their upgrades over a few months while maintaining a single disk image for deployment. In addition, the Tiny also comes with Trusted Platform Module support to better secure encrypted data and key information.

Since small business IT departments sometimes have to perform system upgrades themselves, we took a closer look under the hood to determine the ease of upgrading the Tiny. Accessing the internals of the Tiny was easy. The chassis is held closed with a single screw that, once removed, allowed the cover to be opened by sliding it forward. Under the hood, two more screws hold in place the HDD, which in turn connects to the motherboard using a standard SATA interface.

The Tiny uses SODIMM DDR3 RAM that's usually deployed in laptops, and supports a maximum of 16GB in total. The two memory slots are located under the HDD, which must first be moved aside in order to access the RAM.

For businesses that need a larger SSD than the 128GB and 180GB option offered by Lenovo, or that want to perform an SSD upgrade post-purchase, upgrading the storage and RAM on the Tiny is a relatively painless procedure. With just a screwdriver, I was able to swap in a large capacity 480GB Micron SSD drive in minutes.

The Lenovo ThinkCentre M93p Tiny is a compact desktop machine designed for easy deployment. On one hand, its nonstandard size does mean that it lacks the full features of a standard desktop, such as room for additional HDDs or peripheral cards, though the ease of upgrading basics such as HDD and RAM offsets this somewhat. Moreover, the Tiny is packed with many business-centric capabilities and security features.

Overall, the Tiny packs more than sufficient processing capabilities to run productivity and business apps, provided you don't need a discrete graphics card. Businesses looking into multi-monitor rigs are likely to be wowed by its ability to drive three separate monitors by default, and up to four if they invest in at least one DisplayPort to Dual-DisplayPort adapter. Ultimately, Tiny is an easy business desktop to like.

7 toxic team behaviors IT leaders must root out

13 most difficult-to-fill IT jobs

6 IT management traps to avoid

10 technologies that will disrupt business in 2021

7 management books every CIO must read

10 dark secrets of the cloud