Of all the portable music players Apple has released over the past 20 years, the original iPod shuffle remains my favorite. It wasn’t my first iPod, and 16 years after its debut I’ve owned countless iterations of the iPhone, but I loved the shuffle for its basic design and functionality, not in spite of them.

The iPod also wasn’t the first portable media player I owned, but when it debuted in 2001 with the promise of putting 1,000 songs in your pocket, it wasn’t a hard sell. At the time, portable MP3 players were laughably limited due to the cost of flash memory, capable of storing more tracks than a CD could (barely), but at lower quality. CD players that could play MP3 files burned to a CD-ROM were a better option, but even they maxed out at around 150 tracks, and relied on a medium that was still relatively fragile. With the iPod I wasn’t limited to just holding a few of my favorite Daft Punk and Chemical Brothers tracks, I could carry their entire discographies.

However, both the first-generation iPod with the physical scroll wheel and its touchscreen successor were, disappointingly, limited to computers running macOS. At the time I was on a PC. I had to wait until what is now known as the iPod (Dock Connector) was released in 2003, which also arrived with the Windows version of iTunes that allowed an iPod to be synced to a PC without jumping through hoops. I wouldn’t go so far as to say the native Windows version of iTunes made syncing

, because iTunes has always been an awful, bloated, resource-sucking piece of software—even more so on the PC. It was the antithesis of user-friendly, and why Apple was never able or willing to fix it remains a mystery to me. But I digress.

The internet in the early aughts was the wild west of file-sharing. Finding MP3 copies of almost any song was trivial. Filling an iPod with your entire music collection was easy. Jumping between albums didn’t require swapping plastic discs. The iPod was genuinely life-changing.

What was less endearing about the iPod was that it was heavy—at that time there was a physical spinning hard drive inside it—and it was fragile. To say I’m someone who babies their gadgets is an understatement. There was no shortage of ways to protect the iPod, but mine still ended up collecting nicks and scratches despite my best efforts, particularly on the screen’s plastic cover. I couldn’t not see them when I looked down at the device, and I remember buying and regularly using a screen polishing kit, with different abrasive creams you’d buff on and off, one after the other, to make my iPod’s screen shine again. (These days I won’t even take a new iPhone out of the box unless I’ve got a screen protector ready to apply.)

Financially, I wasn’t in a place to continuously upgrade to the latest iPod models either. They never really dropped in price thanks to added features like the color screen on the iPod Photo (which could only be used to look at photos, not take them). Apparently I wasn’t the only iPod fan on a budget. During Apple’s keynote address at the Macworld expo in San Francisco in January of 2005, 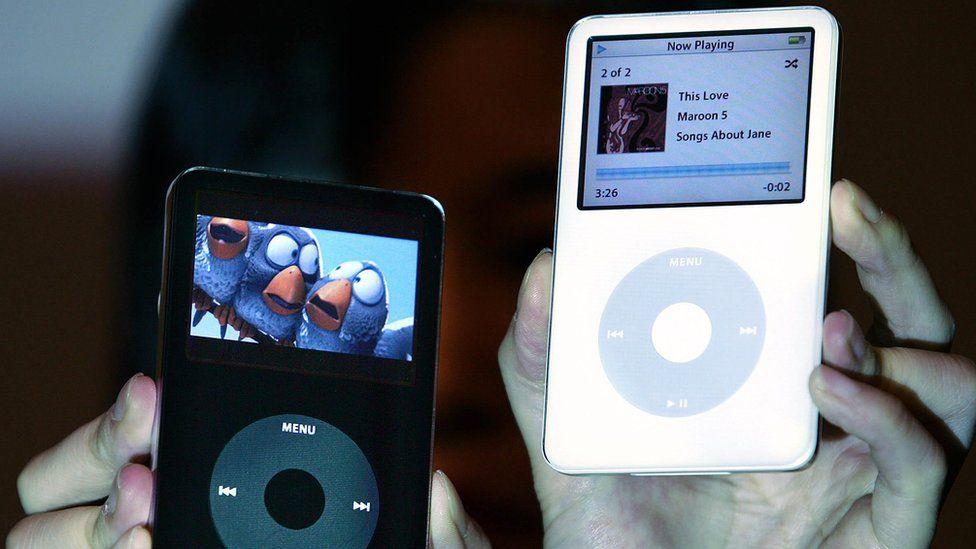 . Starting at $99, it was the cheapest version of the iPod yet.

It lacked a screen and could only hold about 120 songs (unless you sprang for the $149 version with double the memory) but I was immediately enamored with the iPod shuffle and ordered one right away for two very specific reasons. The first was that its incredibly simple design also meant it was the first iPod that was nearly indestructible. Dropping it on the ground, which I did many times, only left it with tiny nicks and scratches that were all but invisible on its shiny white plastic housing. But more importantly, an accidental drop also didn’t destroy a fragile hard drive and wipe out a thousand songs because the iPod shuffle used durable flash memory instead. The device did exactly what my larger iPod did, but without any of the stresses of worrying about what might happen to my pricey investment when I left my apartment with it in hand.

The other reason I immediately embraced the iPod shuffle was the same reason Apple created it in the first place. Carrying hundreds of songs on a single device not only meant you weren’t swapping tapes or discs, it also meant you could randomly jump through tracks in a massive collection, instead of just sticking with your favorites. The iPod’s shuffle feature became a great way to discover new music you already owned, like a radio station free of ads and DJ banter. With the iPod shuffle, I was able to take that idea one step further. Instead of letting iTunes randomly fill it with tracks, I would upload 120 of my favorites so that when I stuck my headphones in it was like I was tuning into a radio station that catered to my exact tastes in music. It was all killer, no filler, as defined by me. We now take such functionality for granted, because algorithms allow streaming services like Spotify to make tailored recommendations based on what we most often listen to, but in 2005 the relatively dumb iPod shuffle gave me a similar experience.

Even the lack of screen was a welcome feature because I never knew what song was coming next, and more often than not it seemed like the iPod shuffle knew exactly what I wanted to hear, making me wonder if there was more going on behind the scenes. In Steven Levy’s ‘

Requiem for a Shuffle

back in 2017, he mentioned having brought up the question of the shuffle feature’s randomness to Steve Jobs himself, who not only insisted it truly was random, but went so far as to put Levy in touch with an Apple engineer who also vowed it wasn’t deliberately serving up specific tracks. Despite Apple’s claims, many of us were convinced the shuffle feature was secretly learning our likes and dislikes, even if deep down we knew such capabilities didn’t exist yet.

The original iPod shuffle, which looked like a pack of Juicy Fruit gum, was eventually replaced by a smaller version that lacked a built-in USB port (they all came with charge and sync docks from that point on), which was followed by a version that looked like a tie tack without any buttons of its own (users relied on the inline remote on their headphones), and then finally a version that returned to the design of the second-generation iPod shuffle but as small as Apple could possibly make it. That last version debuted in 2010, five years after the original iPod shuffle arrived, and stuck around until 2017, when Apple finally

killed off the iPod shuffle and nano lines

Why Apple sent the iPod shuffle packing isn’t a particularly hard question to answer. Like the iPod in general, and countless other portable devices, the iPod shuffle fell victim to the iPhone. As much as I loved the iPod shuffle, not even I could justify carrying it around when there was always an iPhone in my pocket. I eventually passed it on to my father, my polar opposite when it came to babying electronics. His ability to destroy mobile devices in record time is unparalleled, but he enjoyed the iPod shuffle for several years after I handed it over, enjoying Christmas carols, classical music, and John Williams’ soundtracks on his daily bike ride. It still remains in his iPod collection today, and while it’s long lost its ability to hold a charge, the fact that it survived his complete and utter lack of TLC is yet another reason why I still think the shuffle was the best iPod Apple ever made.