The HP Chromebook 14 is no performance powerhouse, but Chrome OS' speediness combined with a funky blue case makes this one fun notebook to use.

Chrome OS is speedy and responsive

Not as powerful as some higher-end Chromebooks

aren’t the weak laptop alternatives that many make them out to be. Apple and Windows devices may dominate the market, but this newer type of portable certainly has its place in the world, and this offering from HP only cements that.

The HP Chromebook 14 comes with enough features and the kind of performance that might make you consider switching. This machine is for you if all you need is an affordable device that will let you browse online, tackle basic productivity tasks, send emails, and stream shows. And, its gorgeous 14-inch display, quality trackpad, and fantastic keyboard round it up nicely.

If you want to do some heavy gaming or need to do intense graphics-related work like video editing, you’ll definitely have to look elsewhere. However, if your daily computing needs are of the basic and less demanding variety, the HP Chromebook 14 might be the right laptop for you, especially considering it comes in at only $199 (about £230, AU$500).

See all of the best 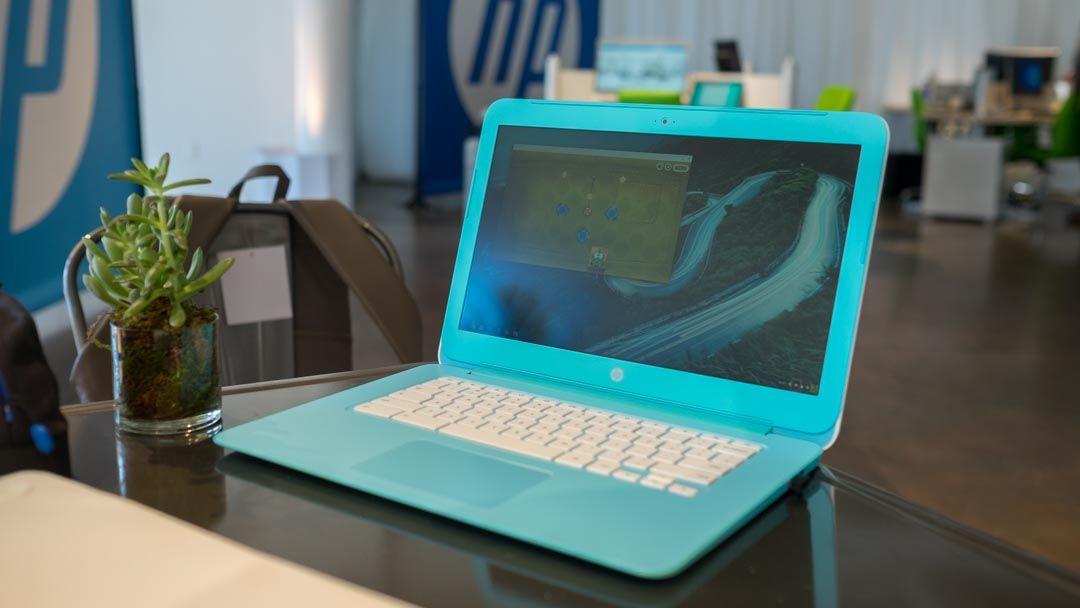 HP's Chromebook isn't exactly a high-end PC, but it's a slick, streamlined piece of kit nonetheless. The tapered enclosure measures 0.7 inches (about 18mm) thick at its thickest point. At 3.74 pounds (1.7kg), it's also reasonably light, though not as much as the 13.3-inch, 2.97-pound

. That extra weight gives you a slightly larger screen, though, and the Chromebook 14 doesn't feel at all heavy in hand.

The case itself is entirely plastic, and it does flex and creak some as you adjust the screen or pick it up one-handed. On the bright side, the case doesn't have any exposed screws, so you don't need to worry about a loose screen dropping out randomly.

Oh. And it's blue. Very blue. Like, swimming-pool blue. The shade of blue, which HP calls Sky Blue, looks cool, but it isn't for everyone. A white keyboard and lid offsets all the vibrant blue, though it makes our Chromebook 14 review unit the PC equivalent of a Smurf. (Whether that's a good or bad thing depends on your taste in 1980s cartoons).

You'll find no shortage of inputs on the Chromebook 14. The left edge features an HDMI-out port, a security lock slot, a USB 3.0 port, a headphone jack, and a MicroSD card slot. Along the right, you'll find the power connector and two USB 2.0 ports. Ideally, I would have loved if all three USB ports supported USB 3.0, but there's plenty of connectivity for most users.

As a writer, I'm picky when it comes to keyboards, and I was pleasantly surprised by the typing experience on the Chromebook 14. The keyboard feels responsive with clicky keys and plenty of key travel.

The keyboard flexes ever so slightly when I pound heavily on it, but under normal use, it isn't mushy at all. My gripe is there's no dedicated Caps Lock key; a Search key takes its place and must be triggered while holding the alt key. It isn't a big deal, but it makes it more difficult to impulsively tweet in all caps.

The trackpad is equally excellent. It's big and spacious, with plenty of room to mouse around. The whole trackpad is a button, so you don't have to fiddle around to find the left- and right-click buttons.

The button itself depresses with a satisfying click, but it's much stiffer the closer to the keyboard you go. If you're accustomed to the trackpad on, say, a

, you'll feel right at home on the Chromebook 14.