For many years, news enthusiasts who rely on Twitter and Twitter Lists to track news about companies, topics and trends often used Nuzzel, an app that synced with your Twitter streams. Unlike the Twitter app, though, Nuzzel sorted your streams and placed the most-shared items first. Because of that, I opened Nuzzel every morning to review the top items on each of my Twitter Lists.

On May 4, 2021, Twitter announced the acquisition of Scroll, the parent company of Nuzzel, and that as part of the acquisition Nuzzel would be shut down on May 6. That leaves Nuzzel users with a few options. People who used Nuzzel to create and distribute newsletters can switch to Revue, a newsletter company also recently acquired by Twitter. People who relied on Nuzzel to provide a sort of most-shared Tweets have a few options.

One option is to wait for Twitter developers to, as a Nuzzel blog post put it, "take the best of the Nuzzel experience and build it directly into Twitter." It certainly is possible that Twitter could provide an option to sort a Twitter List or Tweets by those most shared, as Nuzzel did.

My choice was to explore alternatives. In the past several years, a few RSS reader services have added the ability to connect Twitter. More importantly, these readers also include the ability to identify and sort Tweets by some sort of popularity measure. For example, both Feedbin and Inoreader let you add and sort social streams from Twitter alongside RSS feeds.

In my case, I chose to transition the Twitter Lists I used to read in Nuzzel to Feedly. Specifically, I paid to upgrade to Feedly Pro+, which is the version that adds the ability to connect to Twitter. That's one downside of Nuzzel's disappearance: Nuzzel was free, whereas each of these RSS readers requires a paid subscription if you want to pull in Twitter streams. Annual pricing for an edition that lets you directly add various Twitter streams is about $60 for Feedbin, $70 for Inoreader and $100 for Feedly.

Here's how to use Feedly Pro+ to view Twitter and Twitter Lists—along with a few tweaks to the default settings. My examples will focus on Twitter Lists, but you may add user accounts and Twitter searches in Feedly, as well. In most cases, I'd advise doing the initial transition and set up from a web browser on a laptop or desktop. Once you have everything set up, your streams will sync and can be easily accessed in Feedly on the web or in the Feedly mobile apps on Android or iOS. 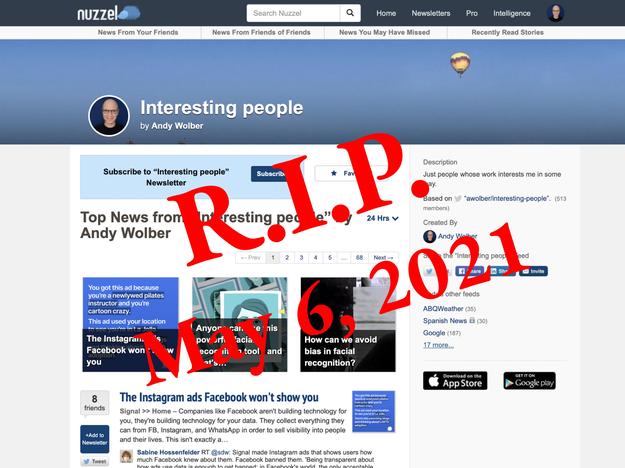 2. Add the stream into Feedly

Select the + on the left-side of Feedly to follow new sources. Paste the URL into the box that displays. You may choose to follow either everything shared in that stream or only tweets with links (Figure B). The latter option may be helpful if you're primarily interested in using the source to discover articles or web resources, not Twitter conversations and comments. I chose to follow everything shared to each Twitter List.

By default, when you add a Twitter List, Feedly displays it as "Twitter List of @awolber/NameOfList" onscreen. That's helpful information if you follow many lists, but in my case, it meant that it made it impossible to navigate to individual lists quickly, since the titles all started the same (Figure C). I chose to rename each list so that each list displayed with a distinct title.

By default, Feedly will display only three popular Tweets, then fill the remainder of the screen with recent items. I adjusted the setting to only display popular Tweets since my goal is to place popular content first (Figure D). You may change the setting as desired. Once adjusted, I could review the Top 20 Tweets for each individual list.

With all of that set up, a daily review of Feedly can replace my prior daily review of Nuzzel. If you want to further refine the sequence or adjust which Tweets display, Feedly, Feedbin and Inoreader all offer additional tools to sort, filter and prioritize streams.

If you relied on Nuzzel to sort Twitter streams, what alternative have you selected? What app have you chosen to replace Nuzzel? If you use Feedly Pro+, are there additional tweaks, filters or settings you suggest? Let me know how you sort Twitter Lists and streams, either with a comment below or a mention on, of course, Twitter (@awolber).

Learn how to get the most out of Google Docs, Google Cloud Platform, Google Apps, Chrome OS, and all the other Google products used in business environments.Delivered Fridays