Google's latest iteration of the Chromecast

, at least in the sense of the original design. It's a tiny hockey puck dongle running a full version of the Android TV operating system (with the Google TV interface on top of it). It's a very cool, compact little piece of technology, but it looks like Google's efforts to keep the hardware small and cheap are creating some unforeseen issues.

A reader wrote in to Android Police stating that his Chromecast with Google TV is out of storage and can't update its apps or operating system anymore, despite only running Plex, YouTube, Netflix, and Stadia. This position has been echoed by a lot of Chromecast users,

as chronicled by 9to5Google

The new Chromecast runs on an Amlogic quad-core Cortex A55 CPU, with 2GB of RAM and just 8GB of storage space. That doesn't seem like much, and it isn't, but you 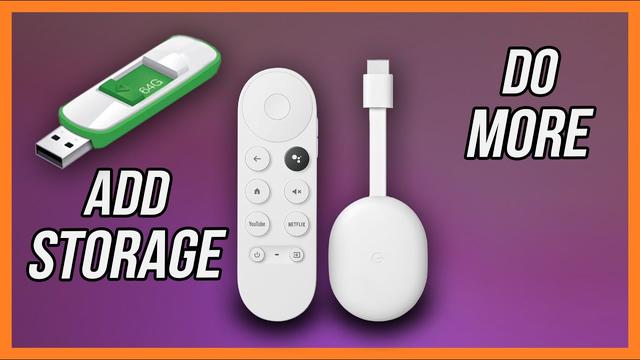 need a lot if all you're concerned about is running streaming applications. Or so the conventional wisdom goes: it looks like the combination of developers letting their APK and cache sizes balloon out, and the tiny storage on the Chromecast (no doubt chosen to hit that essential $50 USD price point) are combining to make some big problems.

Install a variety of streaming apps, or just the defaults that come with the Chromecast and perhaps a game or tool on top of it, and you're suddenly pushing hard against the dongle's 5GB of user-accessible storage. Use up enough of it, and it won't have the spare space necessary to download and install app updates. It's a problem that often shows up in low-power, low-price hardware. The ThinkPad 8 tablet I bought back in 2014 is still running Windows 8, because its 32GB SSD is too diminutive to handle a full Windows update.

What can you do?

There are a couple of solutions here. The easiest (and possibly least helpful) is simply to uninstall any apps that you're not using, or perhaps, that you're using significantly less than others. That should free up enough storage space for your other apps to update normally. It's worth pointing out that the Chromecast with Google TV still works fine as, well, a Chromecast, and you can Cast video content from apps on your phone without any difficulty.

Alternately, you can use a more circuitous method to add storage to your Chromecast. The Chromecast with Google TV doesn't have a MicroSD card slot, a feature that many other Android TV devices have. But if you have a USB-C hub that includes a Power Delivery (PD) port, in conjunction with a decently powerful USB-C charger, you can cobble together a solution. You'll need a USB storage device, preferably with USB 3.0 speeds or better.

Plug the Chromecast with Google TV into your television's HDMI port. Plug the USB-C hub into the Chromecast. Plug the USB-C charger into a power outlet, and into the PD port in the hub. Finally, plug your USB storage device into the hub. Once you've got this Frankenstein's monster of cables and devices assembled, you can use the Android TV system to reformat the storage device and use it as system storage. The short video above will walk you through it. Of course, adding on all that extra hardware kind of defeats the purpose of a low-price dongle.

The other alternative is, well, switching to another set-top box or smart TV system. And that's not the end of the world: while Android TV is probably the most flexible system out there, it's also more or less the same as everything else if all you need is streaming video apps. But that's small comfort to users who chose the new Chromecast specifically for its ability to run Android TV software.