Motorola is facing a $5 million lawsuit over allegations of poor customer service,

smartwatch, according to lawyers.

A class-action complaint was filed against Motorola on April 21 in its hometown of Illinois, slamming the Lenovo-owned company for “unfair, unscrupulous, immoral, and oppressive” business practices. The main plaintiff in the case is a Georgia, US resident named Douglas Lynch, who says he (unsuccessfully) battled Motorola for months to get his broken Moto 360 replaced.

But Lynch isn’t the only consumer who feels scorned by Motorola’s customer service. Girard Gibbs LLP, one of the law firms handling the case, tells us that Motorola owes “thousands of people” compensation.

“We want these issues to be resolved for all consumers,” says Esfand Y. Nafisi, an attorney at Girard Gibbs LLP, who added that the actual compensation owed is “likely higher” than the $5 million referenced in the original filing.

But what has Motorola actually done wrong, legally? Here’s everything you need to know about Motorola’s latest courtroom headache.

Motorola could be forced to pay over $5 million in compensation

Douglas Lynch and his cracked Moto 360

In December 2014, Douglas Lynch bought a Moto 360 smartwatch from Motorola. Less than a year later, on September 4, 2015, he says the back-plate of the Moto 360 cracked. That same day, Lynch started the return process, and says he was was told that once Motorola received the broken smartwatch, it would ship a replacement within four days. After all, back-plate cracking is a common problem with the first-generation 360, one that Motorola acknowledged and eventually fixed with the

On September 9, Lynch says Motorola confirmed it had received the Moto 360, and then went silent. After 12 days without contact,

. Lynch offered to pay the difference between his Moto 360 and a newer model, but Motorola’s rep reportedly declined.

During Lynch’s next phone call with Motorola, he says he was told that a replacement smartwatch was being sent from Motorola’s factory in China. Delivery would take a few weeks, apparently. But when Lynch received an e-mail confirming the replacement shipment, he realised Motorola was sending him a cheaper version of the Moto 360 than the one he originally bought.

The second-generation Moto 360 smartwatch, the model without back-cracking issue

Lynch contacted Motorola about the curious e-mail, and claims he was told that it was erroneous. The actual replacement would be the correct model, the rep said. But when the replacement arrived in December, it was exactly as Lynch had feared: Motorola had sent a leather-band Moto 360, not the more expensive metal-strap version.

At this point, Lynch gave up on the process entirely, and bought a new smartwatch from a Motorola competitor.

A Sampling of Consumer Complaints

The court filing lists eight separate complaints posted on the Consumer Affairs website, where Motorola is rated as 1.1 stars out of a possible 5. Lawyers say this demonstrates the “widespread nature of Motorola’s failure”.

Here are some of the best (or perhaps worst) examples:

– “I have sent my phone back for replacement three times now, and am awaiting my fourth phone (Moto X Pure) to arrive in the mail. They do not send you a new phone as a replacement…they will send you a used phone…the first two replacement phones would not receive any signal and the third phone records static with videos recorded by the phone.”

– “I bought a phone which was defective, changed it under warranty, which again fell through in three months. They send me another phone and this time the new phone did not have a back cover. Within six months, I had three exchanges, and out of six months, was without a phone for two months.”

– “I contacted Motorola to repair my wife’s

, which had a broken screen. I sent them the phone and paid for the repair on December 9, 2015. My wife’s phone was a nice custom Moto X Maker with custom colours and 32GB of storage. I learned we wouldn’t get the original phone back, and that she would only get 16GB of storage. It’s nearly February and I still have no phone.”

When you buy a smartphone or smartwatch (or any product, in fact) from Motorola, you’re given a warranty. That’s a written guarantee promising to repair or replace the device if it breaks within a certain period of time. For Motorola, the warranty lasts one year from the date of purchase. Sounds peachy, right?

Unfortunately for Motorola, the class-action filing claims that the phone maker “breached its…warranty to the plaintiff” by failing to repair his device, or give him a refund or equivalent replacement. 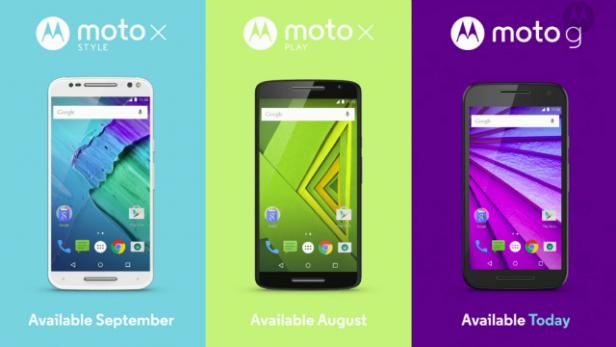 The Magnuson-Moss Warranty Act is a federal law in the United States, which means it applies nationwide, rather than state-by-state. It’s a 41-year-old law that governs warranties, and makes sure that businesses aren’t using them to rip off consumers.

The class-action complaint says that by breaching its express warranty (claim #1), Motorola is also violating the Magnuson Warranty Act.

Interestingly, the filing also goes on to claim that Motorola’s warranty is in breach of the act because it doesn’t “provide sufficient direction to consumers seeking to avail themselves of its protections”.

That’s a roundabout way of saying Motorola doesn’t readily give up contact information in its warranty, which means customers might struggle to find a way of redeeming said warranty.

But the Motorola pain train doesn’t stop there. The state of Georgia has a handy statute called the ‘Fair Business Practices Act’. Any claimants in this case from Georgia – like Lynch, for example – can also stick it to Motorola with the argument that the phone maker violated this state-specific act.

According to the filing, Motorola’s business practices are far from fair

. It says that there’s evidence of the company “refusing to repair or replace defective devices”, as well as “replacing such devices with inferior products… than the purchased product”.

“Motorola’s business practice in this regard is unfair, unscrupulous, immoral, and oppressive to consumer purchasers,” the filing continues, adding that this sort of behaviour “harms the overall marketplace”.

Claim #4 – Motorola has been unjustly enriched

And last, but not least, is unjust enrichment. In law, that means one person benefits at the expense of another person in an “unjust” way. According to the class-action complaint, Motorola did just that.

That’s because lawyers claim to have evidence that Motorola has improperly withheld money or belongings from customers trying to get their devices replaced.

Part of the lawsuit involves trying to get Motorola to pay back owed money to the plaintiffs, or as the filing neatly puts it: “Motorola should be required to disgorge its ill-gotten gain.”

In a statement sent to

“We’re experiencing delays at our US repair center that is influencing repair times for some customers. We know how important it is for you to get your phone back as quickly as possible so we’re working hard to identify and implement solutions. We are dedicated to the highest quality service and this is not up to our standard of excellence. We deeply apologize for any inconvenience this situation has caused.”

After the publication of this article on April 27, Motorola sent us a second statement, which we’ve included here:

“Motorola has a long history of providing exceptional products and services to its customers. We are aware of the lawsuit, and are investigating the claims, which we believe to be without merit.”

We’ve contacted Motorola to discuss the lawsuit, but we’ve yet to be given the opportunity to speak to a company representative.

First, Motorola’s attorneys need to tell the court that it is aware of the allegations, and that it is present in the case. Then the court will decide whether to offer a jury trial, as requested, or a bench trial in front of a judge. A jury trial is better for a plaintiff, but less than 10% of cases go to jury trials in the US, Nafisi tells us. Once that decision is made, the trial can go ahead.

If Lynch wins the case, Motorola could be forced to:

Comply with its warranty

Cover the attorneys’ fees and costs

Pay anything else that “the court deems proper”

Unfortunately, Nafisi says that the process of actually getting Motorola to compensate customers is likely to be drawn out, even if the phone maker is keen to resolve the issue.

“So we’re hoping to get something worked out as quickly as possible though, and that’s really our aim in this case,” he adds.

There’s also a good chance that Motorola may decide to settle the case out of court, avoiding the lengthy legal proceedings and appeasing customers all the same.

Video: If only all Motorola’s phones were as strong as the Moto X Force

Have you ever found yourself at odds with a tech company’s customer service department? Tell us about it in the comments below, or send an e-mail to: