Designed to stand out from the surrounding office towers of Canary Wharf, the 58-storey skyscraper has a distinctive cylindrical form.

The cylindrical One Park Drive was designed by Herzog & de Meuron

"Set against the backdrop of the existing Canary Wharf buildings, the circular form of the new tower clearly distinguishes itself from its orthogonal neighbours," said the studio.

"The form is a statement of the tower's difference. It is a residential tower adding a new dimension to an area dominated by commercial space."

The tower, which contains 484 apartments, forms part of developer

Standing 205 metres tall, it was designed by

to be a landmark structure within the

The central section has a blocky exterior

"It was very clear that this would need to be a signature building," said Brian De'ath, director of residential sales at Canary Wharf Group.

"It stands at the head of the dock in a very prominent position and is the first building you see as you cross the bridge into the Wood Wharf development," he told Dezeen.

The cylindrical skyscraper is made up of regular-shaped apartments

The skyscraper was designed to have the appearance of a cylindrical tower, but the majority of the apartments have regular straight edges.

According to the developer, this creates an aesthetic appearance that differentiates the building from the oblong-shaped office towers, but does not impact the quality of the apartments.

The lobby and reception are on the ground floor

"Round buildings are very challenging to occupy as you need specific furniture or end up with lots of odd-shaped dead spaces," he continued.

"This building was designed from the inside out. It has a superb impact externally, but works internally."

A gym with swimming pool is on the first floor

One Park Drive is divided into four distinct sections, which are clearly visible on its exterior.

"The exterior of the new residential tower is the outward expression of the residential units that constitute the majority of the program," said the studio.

"Aggregated together, these units form a tower facade that offers a clear distinction between the human scale of the residential development and the unifying mass of the office towers behind it." 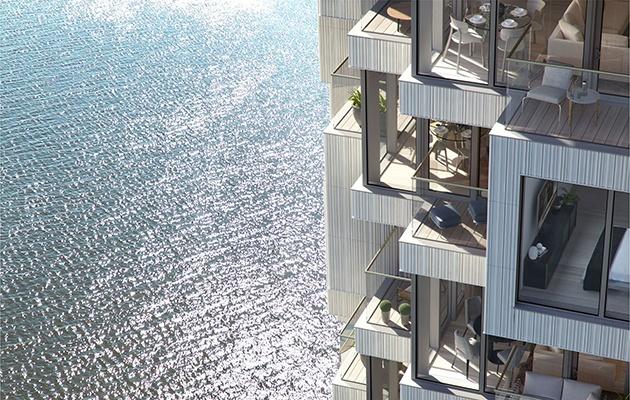 The rounded lowest two floors contain the entrance lobby and cinema space, topped with a gym and swimming pool with interiors all designed by

. Above this are 56 floors of apartments.

The lowest nine floors have rounded floor plates with large apartments that extend out onto curved external balconies.

The skyscraper is visually broken into four sections

Above this are 22 floors of smaller studio, one and two-bed apartments with a boxy exterior expression.

The building is topped with 25 floors of large apartments with curved external walls that are twisted to create external balconies.

Apartments on the lower levels have curved balconies

with the upper floor units designed by interior studio

Seven duplex penthouses on the tower's top two floors, which are yet to be complete, are being designed by Herzog & de Meuron and will be completed later this year.

One Park Drive is the first residential skyscraper in the UK designed by Swiss studio Herzog & de Meuron, which was founded by Jacques Herzog and Pierre de Meuron in 1978.

Previous residential projects by the studio include a blocky,

a plant-covered tower in Beirut