is rock hard. A Souls-influenced take on the side-scrolling

, sprawling in scope yet intricate in detail, it stands resolute, patiently waiting for you to reveal its secrets while testing your mettle with bouts of tough combat and rigorous sequences of platforming. Progress is earned in increments where lessons are not just learned but fully internalized. You chip away, chisel in hand, until Grime eventually reveals itself as a thing of beauty – a monument to whatever we're calling this genre today – and one of the best "Souls-vanias" of recent times.

For all its difficulty, what's more notable is Grime's generosity. Killing enemies and discovering secrets earns you mass, the primary currency and the equivalent of souls. But unlike most other similar games, in Grime you don't lose your mass when you die. You keep it.

This one design choice has a profound effect. By letting you retain mass upon death, Grime lets you level up after you die. You respawn back at the last surrogate (Grime's term for a

-style bonfire) and can immediately spend mass to increase your health or stamina for a little extra survivability, or boost one of the three damage-dealing stats (strength, dexterity, and resonance). The returns here aren't enormous – they're improvements at the margins, at best a few percentage points with each level-up – but the process feels significant in terms of the sheer relief. Sure, you died, and you're gonna have to repeat what is in all likelihood a large section of the level, but you get to hang onto everything you picked up along the way and gain the benefit of being slightly better equipped to tackle its challenges on your return.

It's liberating. The additional stress of the corpse-run, of retracing your steps to recover your lost cash while knowing that another death means permanent loss, is absent here. It doesn’t make Grime easy by any measure, but it does mean you never feel punished for failure. Instead, you're afforded an infinite supply of missteps, and each time you’re picked back up again, dusted off and delivered a little pep talk before you’re sent on your way once more.

The lack of death penalty encourages experimentation and exploration.

More than that, though, the lack of penalty encourages experimentation and exploration. I never felt that nagging doubt over whether I should press on into uncharted territory or retreat to the last checkpoint to cash in. I simply explored. Grime's map is a dense network of tunnels, chambers, and nooks and crannies, all looping through and around each other, interconnecting in places both expected and surprising. I greeted each junction with an inquisitive confidence, keen to discover what lay ahead rather than the almost paralyzing anxiety over which path is the right one to take that often accompanies more punitive Soulslike design.

This approach dovetails with the areas where Grime adheres more closely to the Souls template, such as storytelling. Echoing From Software's restraint, NPCs speak in riddles and metaphor, alluding to grand-sounding beings and events whose mystery is deepened by the impression you're only barely scratching the surface. Other characters are even less coherent – muttering away, unconcerned by your presence, lost in their own little worlds. Even your overall goal is unexplained beyond the impishly cryptic utterings of the few NPCs who seem invested in your journey. 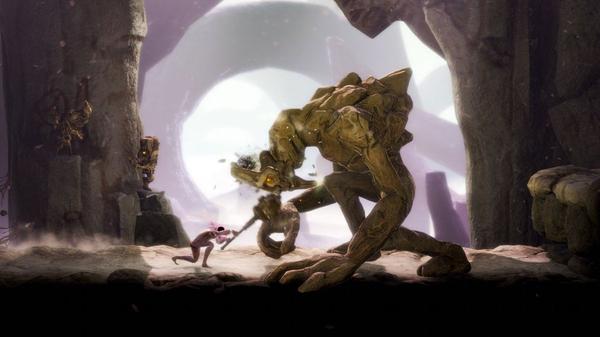 Silent as a stone, Grime sustains mystery and heightens moments of revelation by wilfully withholding information. And because it encourages you to explore and experiment, it was so rewarding to discover all of its little secrets and nuances and intricacies on my own terms.

While the basics are explained, much is left for you to figure out. Each of the Metroid-style abilities acquired after defeating a boss have their primary function explained, but they all possess a secondary use or variation that may not become apparent until hours later. Unlocking these tiny epiphanies – "Wait, that's how THAT works?" – provided some of the most delightful moments of my time with Grime.

Grime is a tough, demanding experience with no difficulty options.

But there were also plenty of moments when I thought about giving it all up. You may notice that this review is going up more than a week after Grime came out, and that’s largely because it is very difficult to beat (also because I hit a game-breaking bug and had to restart, but that was fixed before release). It's a tough, demanding experience, and of course there are no difficulty options. Even with the salve of being able to spend mass upon death, there were still plenty of occasions when I feared I wouldn't make it to the end.

The combat is tough. Enemies hit hard and often, and your stamina bar depletes rapidly. Get yourself in a bad spot and you'll quickly find yourself dead. But enemy attacks are readable – even telegraphed – and you're equipped with useful moves to avoid them. Dashing can be used to put distance between yourself and an enemy, or to dodge through them and their advance, thanks to an ample period of invulnerability. Attacks can be parried with the correct timing, and eventually a staggered enemy can be absorbed as you literally seize its final breath.

Killing enemies by conventional means is usually quicker than absorbing their breath, but sometimes you'll want to get in an early parry to eliminate their shield before switching to your preferred weapon to finish the job. There's considerable variety here, with the numerous swords, axes, and clubs, each falling somewhere on a granular spectrum from "hits light and fast" to "hits hard but slow." Even within a category, similar weapons are distinguished by their moveset and it's worthwhile keeping two equipped in case one is more suitable to the task at hand. I played a "strength build" at first, settling on a club and sword that were both described as slow, and output a similar amount of damage, but the distinct arcs of their respective attacks – both light and heavy – meant I found myself switching between them constantly and really enjoying having to think about which weapon was going to be more effective at any given moment.

Underlining the complexity Grime wrings from its weapon variety, on a second character I opted for a "dex build" and was pleased to realise I had to rethink the tactics I adopted during combat, even finding enemies that had given me trouble previously were now dispatched more easily (and vice versa). The handful of arms that scale with the resonance stat are more exotic – to the extent that I didn't even understand how they worked during the brief time I spent with them – and left me anticipating what new discoveries a third character would bring.

The fine balance of combat is the tension between absorbing and attacking.

The fine balance of combat is the tension between absorbing and attacking. Parrying is risky because a mistimed attempt leaves you open to counter-attack. Successfully parrying will do some damage but it's nowhere near as effective as attacking, and trying to parry more than one enemy at a time is usually a terrible idea. But some enemies need to be parried before you can hit them with your weapon, and you need to parry to be able to absorb an enemy's breath – and that’s a maneuver vital to both replenishing your ability to heal and unlocking traits that boost your performance.

It's a lot to think about in the heat of the action, especially when you're trekking through lengthy areas where the combat feels relentless, multiple enemy types are testing you with wildly different attack patterns, the platforms are littered with harmful environmental hazards, and you're still expected to perform some deft acrobatics. It's, well... it can be A LOT. But gradually applying order to chaos is such a satisfying process; learning to read enemy behaviours, when to prioritize absorbing and when to start attacking, which enemies to take down first, how you're going to make time and space to use your heal, and how you're going to escape if necessary. It all helps distil a sense of clarity in the face of what can feel like overwhelming odds.

The boss fights are tougher still. With the exception of the first, every boss is a stern challenge; even the easier ones required me to make double-digit attempts, and I was stuck on the hardest for an entire weekend and countless deaths. Even so, I enjoyed every minute of it. The boss designs are visually arresting and, at first, feel like nothing you've encountered before. A couple of late-game bosses, in particular, initially seem impossible, leaving me wondering – even after many attempts – how anyone could conceivably avoid that attack or when I'll ever get a chance to deal it some damage. But I soon started to discern familiar elements, began to appreciate its attack patterns, and recognised sparse windows of opportunity. I realised there's nothing unfair about them, nothing I couldn't have anticipated and avoided if I’d done your homework and remained vigilant.

And yet, if anything, the platforming is toughest of all. Not consistently so, I should make clear – most of the time I explored Grime with ease, running along solid ground and performing simple jumps and dashes. But when the platforming ramps up, it raises the overall challenge to its peak. For me, at least, the difficulty here is derived from the sheer length of the trickiest platforming sections, not because they demand precision. They're tests of endurance, of whether you can string together screen after screen of jumping, dashing, and just generally flinging yourself in between all manner of deathtrap without missing a beat and falling to your doom. And they're exhausting to undertake, right up until the point you finally clear them and that exhaustion is swept away by exhilaration.

This became the cycle for me throughout Grime: exhaustion then exhilaration. It's a draining experience since for much of the time it demands all of your attention and concentration. Many sections and encounters, whether heavy with combat or platforming or occasionally both, initially feel impossible. I put down the controller many times, thinking to myself "I'm never going to get through this." But I persisted, I paid attention, I experimented, I regrouped, and then I tried again and again and again, learning a little more with each failure. Each daunting new challenge I broke down into its constituent parts, identifying how I'd evade that attack or how to position myself for the timing of that jump, and I was able to conquer the challenge by putting those parts back together, piece by piece.

In the end I felt like a master craftsman. I'd spent dozens of hours chipping away at Grime, steadily knocking it in to shape, revealing its textures and contours. Grime is still rock hard, but as the credits rolled, I could put down the chisel, sit back, and admire its beauty.