The USB interface of the mobile phones on the market is gradually changed from Micro-USB to Type-C. “Both positive and negative pluggable”. Consumers feel the convenience of USB replace. The experience changes greatly by USB Type-C interface on mobile phone. Although the habits have been changed greatly, consumers accept it well. But have you ever thought about the benefits for consumers? If the old USB solution is completely eliminated.

First of all, you need to understand this knowledge. The familiar rectangular "USB Type-A" was designed as early as 1994. But it was only in 2007 that it was given the function of charging. Though USB Type-A is very classic and long-lived. When it was originally designed, it did not consider the convenience of charging at all. After all, in those days, mobile phones were not born.

The original USB Type-A was initially thought to "serve" some large devices mainly. Obviously, once these devices are installed on the computer, they will not be removed. Therefore, it is unnecessary to consider "plug-in convenience". On the contrary, the followings are the main concerns of USB Type-A interface designers. The USB Type-A is of asymmetric internal structure. It can ensure that the positive and negative poles will not be inserted reversely. And the connector is more secure after being inserted.

USB Type-C is much faster than old USB

Let’s look the appearance of the USB Type-C and the previous Type-A and Type-B series. The biggest difference is that the interface is changed from "square" to "round". Its internal is symmetrical. That makes it possible to plug in and out the front and back at will. The volume and plug-in experience are just the changes we can see. The invisible "connotation" of USB Type-C interface has also changed a lot.

Look at the above figure. It is the internal structure of a typical USB 3.0 Type-A interface. It is different from the early USB 2.0 interface. To improve the transmission speed, five shrapnel are added behind the original four contacts. While the early USB interface actually has only four contacts available. The contacts used for conducting electricity and data transmission up to nine in USB 3.0. How many contacts does the USB Type-C interface have? The answer is 24, more than double of the Type-A interface after USB 3.0.

Thanks to this design. For. The highest transmission rate of USB Type-A interface is 20gbps of USB 3.2 gen2x2 specification. However, the USB 3.2 specification "strongly recommends" using Type-C as the only interface scheme. We can hardly see such a high rate on the traditional USB interface device. 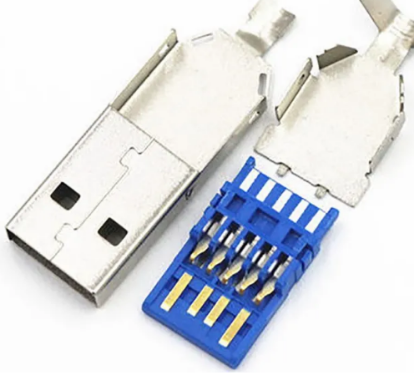 In the latest USB 4 specification, Type-C is directly designated as the only interface shape. It demonstrates the great potential of Type-C interface in high-speed transmission further.

Type-C is the absolute future for the whole industry

Smartphones are very common nowadays. The wire transmission rate between PC and smartphone seems to be less important. Mobile phone manufacturers have changed the charger interface. From the old USB Type-A to the latest USB Type-C. This actually brings consumers and manufacturers an inconvenient convenience advantage. That is the unification of fast charging standards among major brands.

Seeing from the perspective of business strategy. They develop their own fast charging technology actively to establish their own ecosystem. However, different mobile phones have different fast charging protocols. They are not compatible with each other. For consumers, they can only charge at a relatively low power when mix chargers. If the original charger or even the original charging wire is lost. The charging speed will several times slower. That is unbearable.

Therefore, treasures have been taken as early as a few years ago. Many countries and regions have issued relevant industry standards or laws and regulations. Including China, the European Union and so on. Smartphone manufacturers are required to unify charging standards actively. The result of this "unification" is the today’s USB PD charging protocol. That is based on the USB Type-C interface.

What are the benefits of USB PD charging protocol?

On the one hand, it is a part of the current USB official specification. It can be compatible with various charging chips. On the other hand, the theoretical power of USB PD charging protocol can reach up to 100 watts. Even if it is slightly reduced due to the cost and charger size. It is enough in performance as a "backup fast charging scheme" for each company.

Let's think about the future mainstream middle and high-end smart phones. They all switched to the charging cable scheme based on dual USB Type-C. It means that they can get more power. When consumers use charging adapter between different brands and types. It can save money for consumers to buy equipment. The benefits to environmental protection cannot be ignored as well.

Some friends may think one question. If all the wires and chargers are replaced with dual USB type-C interface. Doesn't it mean that the old computers can't connect with mobile phones from now on? It was. But you should know one thing. As early as a few years ago, most of the products in the PC industry have provided Type-C USB interface. Such as most laptops, tablet computers and even high-end desktop motherboards. On the other hand, it’s the latest USB 4 interface specification. USB replace will affect all USB interfaces except Type-C. Just as we mentioned earlier

The above are my analysis. We can see that the function and performance will greatly improve after USB replace. USB4 is no exception. Although there are some disputes. Type-C interface does make up for many shortcomings of the old USB interface. The information we have so far is very encouraging. In the next few years, the following will not be a problem. Such as meeting the requirements of device connection, data transmission, data transmission and charging.