Graeme Ferguson, a Canadian documentarian who cocreated Imax, the panoramic cinema experience that immerses audiences in movies, and was the chief creative force of the company for years, died on May 8 at his home in Lake of Bays, Ontario. He was 91.

His son, Munro Ferguson, said the cause was cancer.

In the 1960s, Mr. Ferguson was making a name for himself as a young

world’s fair in Montreal. He traveled for a year filming the movie, which included footage of Inuit life and the aurora borealis.

,” was screened in an immersive theater configuration: Audiences sat on a rotating turntable as the movie played on a panorama of 11 fixed screens. The experience

. Another movie at Expo 67 that similarly used multiple screens, “

,” was directed by Roman Kroitor, who was Mr. Ferguson’s brother-in-law. Soon, the two men had a vision.

“We asked each other, wouldn’t it be better to have had or been able to have a single, large-format projector filling a large screen?” Mr. Ferguson told

, a Canadian film magazine, in 1997. “Obviously the next step was to have a large film format, larger than anything that had ever been done.”

But despite Imax’s stunning technology, Mr. Ferguson struggled for decades to persuade investors to embrace his vision. In a tale of innovation, setbacks and adversity, his company nearly went under several times, and it took years for Imax to become fully realized as the cinematic marvel it is today.

“People kept telling us nobody would sit still for 90 minutes and watch an Imax film,” Mr. Ferguson told Take One. “We were told that endlessly.”

A promotional display for the Imax version of “The Lion King” in 2019. It took Mr. Ferguson years of winning over skeptics for Imax to become fully realized into the cinematic marvel it is today.

, a former high school friend who had become a successful businessman, to be their partner, and he next enlisted

, another former high school buddy who had become an engineer, to help come up with Imax technology. They soon developed prototypes for the camera and large-format projector needed to film and show Imax movies.

to debut their technology at the 1970 Osaka Expo in Japan, so they made an overture to a Japanese bank, Fuji, for funding. They

a delegation of bank officials their Imax offices in New York and Montreal, both filled with industrious employees. Impressed by what they saw, Fuji Bank signed off on the project.

What the delegates didn’t know was that the New York office was Mr. Ferguson’s freelance studio and that the Montreal headquarters were production rooms that Mr. Kroitor had rented out just days earlier.

in Osaka not long after. Though the movie was successful, the company continued to struggle with financing.

Back in Toronto, Mr. Ferguson heard that a new amusement park called

was planning to build a large-screen theater. He approached its team, and they agreed to purchase an Imax projector. In 1971, Ontario Place began showing “

theater and the model for future Imax cinemas.

Imax thrust viewers into unexpected realms throughout the 1970s: “ 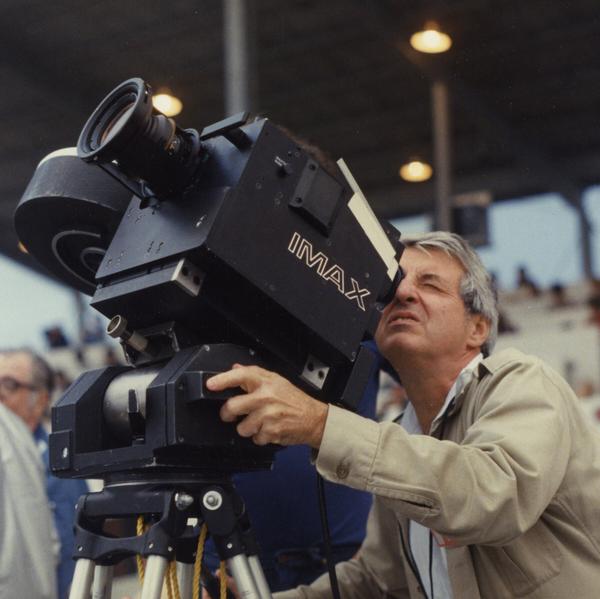 ” was a documentary about the Ringling Brothers and Barnum & Bailey circus; “

” chronicled the wonders of flight; and “

” was about underwater life.

In the 1980s, Mr. Ferguson approached NASA with an idea to put moviegoers in space by training astronauts to use Imax cameras on spacecraft. The collaboration resulted in several successful documentaries that established the Imax brand.

Mr. Ferguson and his fellow founders sold the company in 1994, when they were in their 60s, to two American businessmen, Richard Gelfond and Bradley Wechsler, who

Imax in a leveraged buyout and took the brand

. In the Take One interview, Mr. Ferguson admitted his surprise at how challenging it was to find a buyer, even with the company’s established success.

“The reaction time to anything new is always longer than the inventor can ever imagine,” he said. “You think you might have built the better mousetrap and the world will come to your door the next morning, but they will beat the way to your door about five years later. That’s really how the world works.”

Mr. Ferguson remained involved with the company after it was sold, working as a consultant and producer of films like “

Mr. Ferguson describing Imax’s space camera in 2012. In the 1980s he approached NASA with an idea to train astronauts to use Imax cameras on space shuttles, resulting in several successful documentaries.

Ivan Graeme Ferguson was born on Oct. 7, 1929, in Toronto and grew up in nearby Galt. His father, Frank, was an English teacher. His mother, Grace (Warner) Ferguson, was an elementary-school teacher. His parents gave him a

camera when he was 7, and he used it to photograph steamships on Lake Rosseau, about 120 miles north of Toronto.

to study political science and economics. The avant-garde filmmaker

taught a workshop at the university one semester, and he became her lighting assistant. She encouraged him to abandon economics and make movies instead.

In the 1960s, Mr. Ferguson worked as a cameraman in New York and collaborated with filmmakers associated with the cinéma vérité movement, like

and shot footage for an Oscar-nominated documentary called “

His marriage to Betty Ramsaur in 1959 ended in divorce in 1974. In 1982, he married Phyllis Wilson, a filmmaker who became his creative collaborator and produced several Imax movies with him.

She died in March

In his late 60s, Mr. Ferguson settled with his wife in a sprawling stone cottage on Lake of Bays that he had bought after the Imax sale. Mr. Kerr and Mr. Shaw also lived in homes on the lake, about 140 miles north of Toronto, and the men often worked on their boats together.

Throughout the pandemic, Mr. Ferguson read bleak reports about the state of Hollywood and the shift in viewing habits, with streaming video luring audiences from theaters. But he wasn’t worried about the fate of Imax.

“He was completely convinced it would flourish even if the rest of the exhibition industry was going to do much worse,” his son, Munro, said, “because he believed that if you’re going to leave your house, you might as well go see something amazing.”