itbit is attempting to challenge the dominance of the Apple Watch with the Sense: a smartwatch packed with advanced health sensors for stress, heart rate and ECG wrapped up in a neat and tidy package. But be careful, because if you damage the watch, it appears you can’t even pay Fitbit to fix it.

It costs £300 and is Fitbit’s top model above the £200 Versa 3, which is essentially the same smartwatch without the advanced sensors, plus a cheaper line of fitness trackers.

The watch measures just 40.5mm across and 12.35mm thick, making it one of the smallest smartwatches available. The 1.58in OLED display is bright and surrounded by a polished stainless steel bezel that forms part of the electrical connections for the sensors. The rest of the body is aluminium.

The Sense comes with a silicone strap in two sizes, which clips into proprietary quick-release slots on the back of the watch.

The screen can be set to always show the time and other data, or to light up on turning your wrist or pressing the button in the side of the watch. You cannot wake it up by tapping the screen, which I found annoying. There are hundreds of watch faces available from Fitbit and third parties, which you can download using the Fitbit app on your phone.

The battery can last up to six days between charges, but lasts more like two with the screen on all the time, calls and notifications turned on, and using some of the more advanced health monitoring features.

I had to charge it before bed every other night with everything turned on, running a couple of times a week, tracking walks and my sleep. A 26-minute run with the screen on and GPS active consumed 6% of the battery, meaning it should last the length of a marathon or so.

The watch connects to the Fitbit app on your Android or iPhone via Bluetooth, but also has wifi for downloading updates, apps and similar.

, Fitbit declined to answer any of the Guardian’s sustainability questions, including on the use of recycled materials, whether the watch is repairable and the costs to do so out of warranty, and battery lifespan, losing it a star. Batteries in other smartwatches typically last for at least 500 cycles while maintaining at least 80% of their original capacity.

The Sense was awarded

five out 10 for repairability

by repair specialists iFixit, but Fitbit does

not appear to offer

, such as those for broken screens or battery replacement, also losing it a star. It ships with a charging cable, but not a power adaptor.

Fitbit has recently been

, which has made significant progress on sustainability, so hopefully Fitbit will improve in this area.

There are built-in apps for timers, alarms, health monitoring and viewing your calendar, but good third-party apps are a little thin on the ground.

Fitbit’s software is fairly slick. Swipe down from the top for smartphone notifications, up for widgets including health stats and the weather, left for apps and right for quick settings.

Press the side button once to return to the watch face, or twice to access four quick shortcuts for music, apps and other functions. Press and hold it to invoke Amazon’s Alexa or

Assistant for voice queries, timers and other functions, which are responsive as long as the watch has a good connection to your phone.

Notifications from your phone are fairly basic, showing texts and alerts, but no images from chats, smart cameras or similar. You can reply to messages with canned responses or voice dictation on Android, but not if used with an iPhone.

Music controls do not automatically appear and are somewhat cumbersome to get to: double-press the side button and tap the music shortcut to control playback, volume and other functions.

The Spotify app is only a remote and cannot store or play music directly. Deezer or Pandora in the US can download tracks and play them via Bluetooth headphones. The watch has Fitbit Pay for contactless payments, but the number 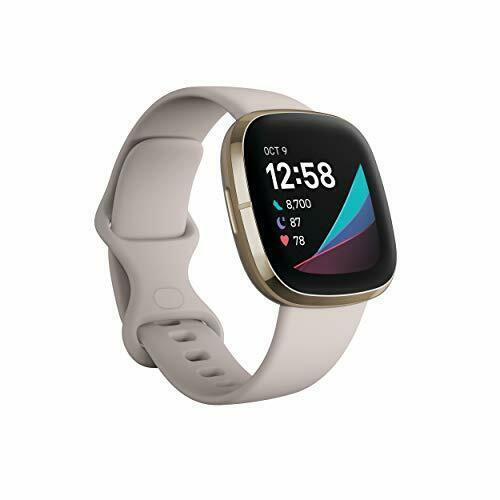 of UK banks that support it

The ECG feature works much like those of competitors – hold your fingers on the metal band around the outside of the screen for 30 seconds.

The Sense is packed with health and fitness features. It records your heart rate every five seconds, counts steps and active time, and has automatically adjusting high and low heart rate alerts, move reminders and daily activity goals.

It also has advanced sleep monitoring, recording an overall “sleep score”, various sleep cycles, heart rate variability, skin temperature, breathing rate and blood oxygen saturation. A smart alarm function wakes you up at the optimum time in your cycle, too.

One of the key features is the electrocardiogram (ECG) sensor, which records the rhythm of your heartbeat and works just as well as rivals, useful for keeping an eye out for early warning signs of heart trouble. The other is the electrodermal activity (EDA) sensor, which detects changes in the sweat level of your palm to measure stress levels in addition to data on stress interpreted from heart rate and sleep.

The idea is sound but it requires you to place your palm for two minutes each time you want to record it – not something I’m going to do regularly. Guided mindfulness sessions use the EDA sensor too, but I didn’t feel any more relaxed than after doing some basic breathing exercises. It could be useful for keeping more empirical records of stress levels if you’re particularly worried.

The watch has a simple but functional display showing three stats at once. Tap the middle one to rotate through your choice of time, distance, pace, heart rate, calories steps, laps and active minutes.

On top of general health and activity monitoring, the Sense can track and record 20 different exercises, including the usual walking, running, swimming and cycling, yoga, circuit training, golf, tennis and others.

The watch can automatically track many of the more vigorous activities taking more than 15 minutes in length, including walking and running: this records time, heart rate, calories burned, steps and other bits, but doesn’t activate the GPS for a route map. Manually recording the activity adds distance, pace, laps and a GPS map of the route where applicable.

For running, the Sense gets a GPS lock in about 30 seconds. Its heart rate data varies slightly to that produced by a Garmin Fenix 6 Pro Solar or Apple Watch Series 6, but reached similar averages. The distance and pace of routes run along straight roads appeared accurate, but recordings for routes around parks or with many different corners were shorter than competitors by as much as 200m over 5km, which is disappointing. The Sense also doesn’t record or display cadence or any other more advanced running dynamics information, either.

Much of Fitbit’s goals are based on heart rate zones, where more intense exercise begets more “zone minutes”, which are effectively exercise points towards your daily goal. It is an easy to understand scheme and more motivating than using just steps as a metric for success. Fitbit Coach provides guided exercises, too, which vary from basic running or walking plans to mindfulness and diet habit-building schemes.

Fitbit differs from competitors in requiring an additional £7.99-per-month

for many of the advanced tracking and analysis features. These include analysis of duration, heart rate and restlessness of sleep and the health metrics dashboard in the app showing skin temperature, heart rate variability and breathing rate. Fitbit premium also adds features based around guided workouts, plans and challenges, where you can link up and compete with other Fitbit users.

There are plenty of watch face options available from Fitbit and third-party developers.

You need to routinely open the Fitbit app on an iPhone to keep it from being shut in the background and stopping things such as weather from updating on the watch.

The charging cable is annoyingly short, at just 52.5cm.

The Sense comes with a six-month free trial of Fitbit premium for new customers.

and is available in black or gold.

For comparison, the RRP for the Fitbit Versa 3 is

It has many advanced health sensors, including ECG for heartbeat rhythm and EDA for stress monitoring, and good sleep and daily activity tracking. But some of the features and analysis require a £7.99-a-month subscription to access, which is irritating for a £300 device.

Automatic and manual workout tracking is solid, but the watch lacks more advanced metrics offered by rivals such as cadence for running and has issues with GPS accuracy on curvy or circular routes.

However, Fitbit’s failure to address sustainability concerns, device repairs and maintenance outside of warranty is a big problem,

. If you smash the screen or the battery wears out, you’re on your own; users report that you simply can’t pay Fitbit to fix the watch, making it an expensive disposable item, which is a real shame.

Alexa/Google Assistant timers and alarms are kept separate from the built-in alarm or timer apps on the Sense.