Ken Underwood has an incredible story to tell.

It's an unbelievable tale of service, love, devotion and determination, so full of impossible twists that Hollywood producers would reject it as too far-fetched, nigh onto impossible.

The only thing is, it's true.

2nd Lt. Harryson Underwood, son of Ken, graduates from pilot training Friday morning at Vance Air Force Base. A host of family members will be on hand for the occasion and one will pin his new wings on his chest. Only they won't be new wings, they will be old wings, a set worn by World War II P-38 pilot 1st Lt. Kenneth Harry Underwood, grandfather of Harryson and father of Ken.

Thus the story of the Underwood family's love of aviation will continue. But let's go back to the beginning.

On May 18, 1944, 1st Lt. Kenneth H. Underwood was flying his P-38 Lightning, designated CG-K, near the town of Bury St. Edmunds, in the East Anglia region of southeast England. He was seen buzzing the area, flying fast and low.

But something happened to Underwood's plane that day and he crashed in a farmer's field, slamming into a tree. The crash took his life.

At the time 1st Lt. Underwood's wife, Alice, was seven and a half months pregnant with Ken. When Alice received the telegram informing her of her husband's death, she was not surprised — the night before she had a dream that the sky opened up and her husband was looking down on her.

When young Ken was 3, his mother remarried.

"When I was a little boy I knew I had another daddy, Ken," said Underwood. His step-dad, Earnie, he said, "Was the most wonderful man. He was a farmer, a cowboy. I had pictures up on a chest of drawers, one of daddy Ken and one of daddy Earnie."

His mother didn't talk much about the crash, but did show Ken the fateful telegram.

"I tried to imagine what it looked like where he was killed," said Underwood.

"He told me stories," said Ken. "I was laughing and crying at the same time."

Underwood also met his father's wingman, Col. Jack Jenkins, who told him he looked like his dad.

"I had never heard that," said Underwood. "That was eye-opening to me."

After the senior Underwood's death, his buddies cleaned out his locker and sent everything to Alice, save for a bottle of liquor. They kept that bottle until they got word Alice had given birth, then drank a toast to their dead friend's new son.

"They figured I would never find out," said Underwood.

In 1986, Alice lay dying of pancreatic cancer when she told her son she had never forgiven his father for dying in a non-combat aircraft accident. 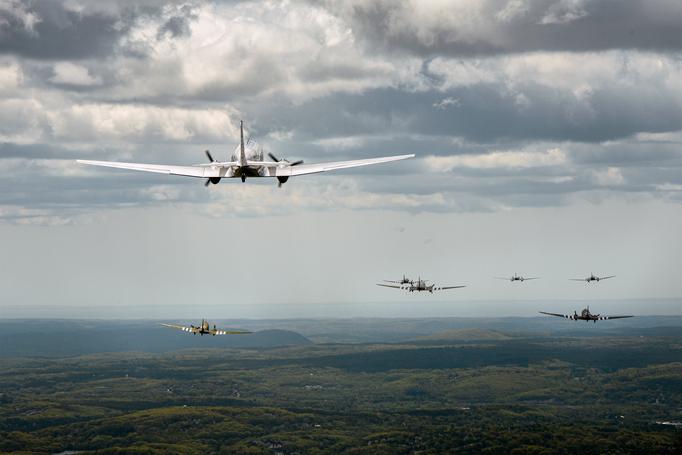 Before she died, Alice also told her son that Bert Shepard, who lost a leg when the P-38 he was flying crashed, but who went on to pitch one major league baseball game for the Washington Senators, was one of his dad's squadron mates. Underwood tried to find Shepard, to no avail.

A year later, Ken attended an air show in California with about 8,000 to 10,000 other people. While watching a P-38 being put through its paces, he told the man standing next to him his father had flown a Lightning during World War II. The man answered that he had, too. That man turned out to be Bert Shepard.

"You can't put odds on how this story evolved," said Underwood.

Shepard advised him to write to the Air Force for a copy of the accident report, which he did. The cause of the crash was blacked out, but the pictures showed pieces of the elder Underwood's P-38 scattered over a field, and showed a tree with the bark burned up about five feet.

"That was the tree that killed my father," said Underwood. "I said, 'I'm going to find that tree.'"

Ken knew his dad had died around Bury St. Edmunds, near the base used by the 94th Bomb Group. Shepard advised him to put an article in the 94th Bomb Group's alumni newsletter, to see if anyone remembered a P-38 crash in May 1944.

In 1991, Ken received a letter from Canada, from Brian Tyson, who once lived near Bury St. Edmunds, England. He had read Underwood's plea for information about the crash. Tyson's letter explained he and his brother, Pat, were walking home the day the elder Underwood crashed. They saw the plane come down and raced to the crash site. MPs wouldn't let them near the wreckage, but Pat recruited some girls to distract the soldiers, then he sneaked out into the field, where he recovered the aircraft's rudder pedal, which he kept until turning it over to Ken Underwood when he traveled to England in 1992.

Also on that trip, Underwood met the farmer. Tom Mann, on whose land his father had crashed. The tree was still standing, still showing signs of the crash decades earlier. While they walked through the field where his father crashed, Mann suddenly stopped and said, "What's this?" He bent down, dug around a bit and pulled out about a foot-long piece of twisted, riveted metal.

"He said, 'This has to be from your father's airplane,'" said Underwood. Mann told Underwood he had been farming that field for 48 years and had never found a fragment of the airplane.

"Bookies in Vegas wouldn't put odds on all these things that happened," Underwood said.

Underwood returned to England in 1997. Mann's granddaughter was with him that day as he and Underwood walked around the old tree.

"She said, 'Grandpa, what's this?'" Underwood said. It turned out to be a piece of his father's flying boot.

"I believe I will meet my father some day," said Underwood. "He led me there twice. Twice he helped me find pieces. I don't know how I could do it any other way."

Alice was convinced her husband was killed while hot-dogging, flying recklessly for fun, but Arthur Thorsen, his father's flight leader, disputed that in a letter to Ken. Thorsen wrote that the elder Underwood was a serious, dedicated pilot who likely was simply practicing his low-level flying skills, useful for strafing runs, when his airplane malfunctioned, leading to his death. But Ken knows he will never know for sure.

"It is still a mystery," said Underwood.

Ken Underwood grew up wanting to be a military pilot, but asthma and poor eyesight prevented that. His son, Harryson, had the same dream, and Friday he will realize that dream when he walks across the stage at the Vance AFB auditorium. He has been assigned to fly the F-15E Strike Eagle.

"I'm not just proud of him I am happy for him," said his father, who admits his "knees may wobble and give out on me," when his son is pinned with the same wings Alice pinned on the elder Underwood's chest 74 years ago. "I am so happy for him to get to do what he wants to do. I am a proud and happy father."

Harryson Underwood was destined for the Air Force, it seems. One of his father's fraternity brothers, and one of Harryson's mentors, was Gen. (ret.) Richard Myers, former chairman of the Joint Chiefs of Staff and now president of Kansas State University. Myers, incidentally, earned his wings at Vance.

Harryson's due date, by the way, was April 16, 1993. April 16 was Lt. Kenneth Harry Underwood's birthday. Harryson, however, was born three weeks early.

"How do you figure all those things happened?" said Underwood.