People are used to cuboid, cube, and rhombus case. It's indeed a bit aesthetically tired. No matter how beautiful the LOGO and how delicate the workmanship is, the structure itself is not refreshing. Since the listing of the Apple MAC PRO, the design of the cylindrical pc case has always been eye-catching. So, what are the characteristics of this new discovery called Apple's "trash can"?

At that time, in terms of price, the two configurations of Mac Pro were priced at 28888/21888 yuan respectively. Obviously, the price of Mac Pro is currently the highest starting price among all Apple products. But the audience is much narrower than other products. This is destined for this computer to face users in the professional field. So, Apple's "trash can" as a typical representative of a cylindrical pc case has the following 9 major advantages:

After opening the Mac Pro box, you will be amazed by its excellent design. The Mac Pro is quite sturdy and may look a bit like a trash can. But its black polished body can add so much color to your desk.

Desktop computers are usually large, bulky, and take up a lot of space. The Mac Pro can actually be placed directly on the desktop and is quite beautiful.

The Mac Pro was designed to be its fastest computer. But it was really shocking to see it handling tasks quickly. It also handles video processing, photo editing, file uploading and downloading tasks at the same time. It feels that no matter what program is running, it is faster than other computers. 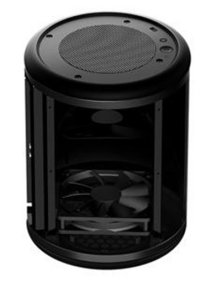 For companies looking for products to help improve employee efficiency, Mac Pro may be a good choice. The computer runs fast and has so many ports-6 Thunderbolt ports, 4 USB ports and 1 HDMI port. So, it can be connected to a large number of displays and external devices.

Mac Pro comes with 6 Thunderbolt interfaces, which can bring great flexibility to users. Users can connect several displays through them. You can also connect other devices to build various ultra-fast storage solutions. The Thunderbolt interface is fast and flexible. With the support of more devices, it will become more and more attractive.

6. Will not be outdated

The old Mac Pro generally degrades after several years of use. The new generation of Mac Pro has a better configuration. Users who used to maintain Apple computer software and hardware can use it for a long time.

The old Mac Pro was not very noisy when it was running though. But it was not quiet either. The new generation of Mac Pro is surprisingly quiet. In fact, when users use it to compose text, it doesn't even make any noise. When pushing its task processing capacity to its limit, it can also be surprisingly quiet. Apple has done a good job of noise cancellation in Mac Pro.

Speaking of Mac Pro, we have to talk about how it runs OS X Mavericks. OS X Mavericks responds faster on Mac Pro than Retina MacBook Pro. And its handles tasks a bit faster. OS X is a reliable and comprehensive operating system that makes the Mac Pro experience better.

Mac Pro is expensive, starting at $3,000. But the device is worthy of the high price. It is beautifully designed and powerfully configured. It can be described as a leader in the desktop market.

In addition to Apple's "trash can", many brands have tried to design cylindrical computer cases. For example, Samsung’s ArtPC Pulse is a consumer-grade modular PC host launched by Samsung and Harman Kardon. This high-end host product is not only a modular design, but also a relatively trendy cylindrical design. Its appearance resembles a gas tank, which is quite similar to the Mac Pro. However, in terms of style, Apple's Mac Pro is stylish and simple. But, ArtPC Pulse has a stronger sense of technology. Samsung said that the cylindrical design of ArtPC Pulse can save internal space to the greatest extent. And ArtPC Pulse is also 85% smaller than a general PC host.

4. All-metal body design, including respiration lights. Integrated Harman Kardon 360-degree omnidirectional speakers are on the top and bottom of the chassis.

There are not many designs of cylindrical computer cases currently on the market. However, due to the difference in mainstream aesthetics, there are still certain hobby groups. People who like cylindrical pc cases can compare and choose the most suitable computer model.