on the Tappan Zee Bridge in

with LED animations that respond to people passing by.

Called Current, the permanent sculpture is located on the Westchester County side of Tappan Zee Bridge spanning the Hudson River between Tarrytown and Nyack.

Current is located on a bridge in New York state

Current is composed of 12 triangular

arches positioned on a poured concrete foundation. The arches are lined up alongside each other and gradually decrease in height.

Each arch is fitted with an iridescent glass fin on its apex that refracts sunlight and creates shadows during the day, while integrated LED lights produce a white glow after dark.

"The name was chosen in reference to the ebb and flow of river currents on the Hudson River, as well as currents of light and currents of time," artist

The installation features motion sensors that detect movement from passersby, which triggers LED light animations that respond to pedestrians, drivers and cyclists.

"In the evening, Current creates a shared spatial experience through the light animations that respond to movements of passersby," explained Wing-Zi Wong.

Similar to a clock's chime, the sculpture also plays a different light animation at the start of each hour of the day.

"The work is a dynamic and interactive sculpture that celebrates transformation," said the artist.

Officially named the Governor Mario M Cuomo Bridge, the Tappan Zee Bridge replaced a former version of itself in 2017.

Current's foundation, cladding and the mullions securing the glass fins in place are all made of steel reclaimed from the old bridge.

The installation is designed to be interactive

Wing-Zi Wong's process involved studying the site and history of the Hudson River and the old Tappan Zee Bridge, after which she developed the installation using 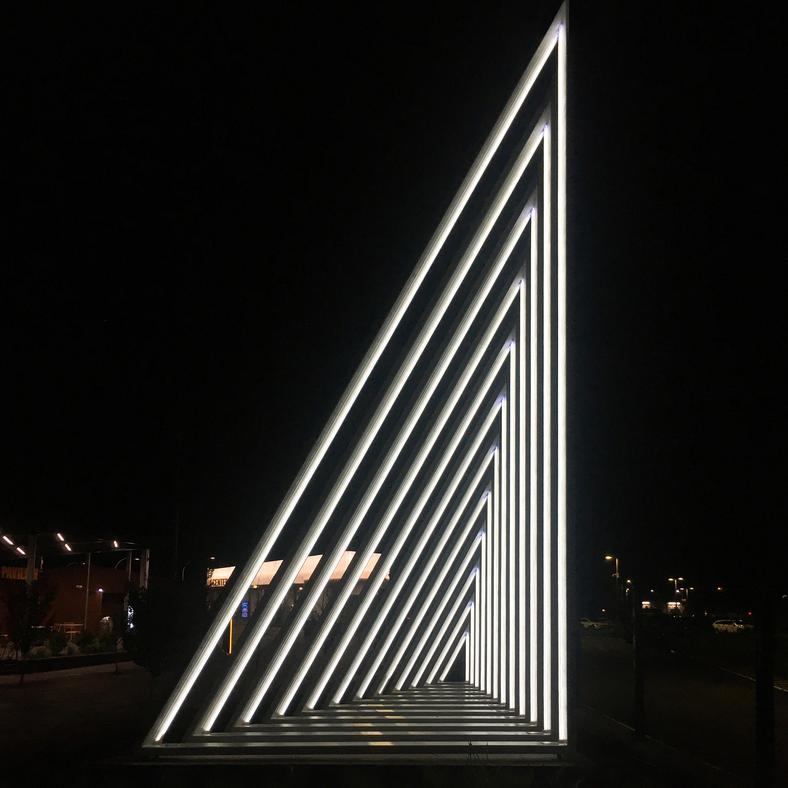 "Current pays homage to this connection and to the legacy of the Tappan Zee Bridge as the historic primary connection point spanning the Hudson between the two counties north of New York City," said Wing-Zi Wong.

Current engages with the history of its location

Cheryl Wing-Zi Wong is a New York-based artist whose work explores the boundary between art and architecture.

a sculpture at this year's Goodwood Festival of Speed

that can be transformed into a race track using an augmented reality app.

The images are courtesy of Cheryl Wing-Zi Wong.